Juicy pears take center stage in this simple and delicious Roasted Pears with Browned Butter recipe! A honeyed and spiced browned butter is smeared on hot, griddle-roasted pears, then sprinkled with cinnamon toast crumbs and served alongside creamy mascarpone for a treat worth savoring all autumn and winter long. Whipped up on the Cuisinart 360° Griddle Cooking Center, this dessert is ready in a hurry, to serve just a few or a whole party of friends and family. Grab the season’s best pears and enjoy a wholesome dessert today! 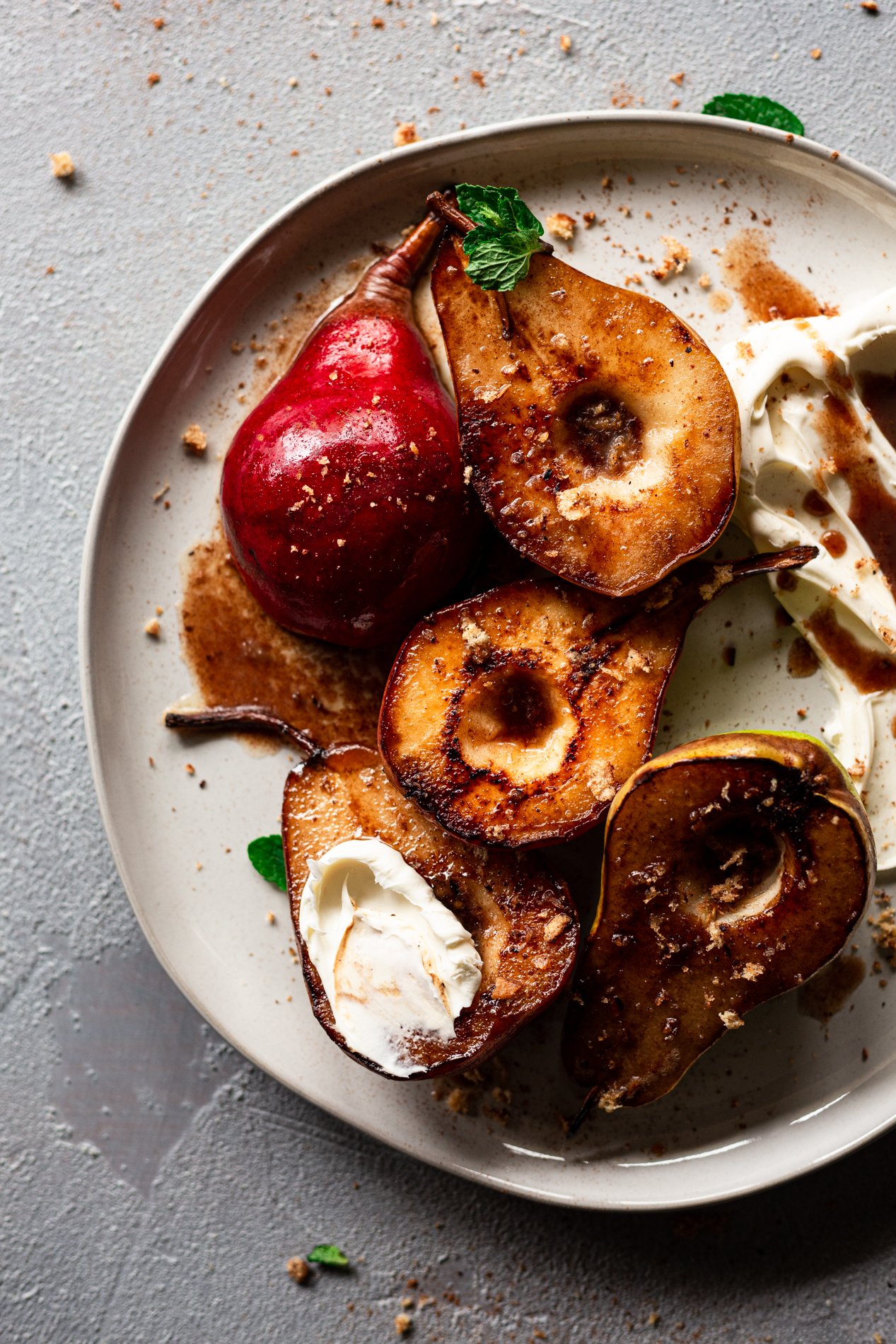 Well, in theory, anyway. We actually froze over the weekend, the snowflakes were flying. It’s not totally unusual to have snow this early, but after several days of near-70 degree weather, it was quite the change!

But you know a little cold and wet doesn’t stop me from breaking out my fave Cuisinart 360° Griddle Cooking Center to make some deliciously epic noms, like my epic zucchini fritters, maple-bacon breakfast burgers, and calabacitas with quesadillas.

I hit up the store and picked up a variety of bartlett, bosc, and red anjou pears for this dish to please every palate, and with a quick roasting on the griddle’s surface, each pear lends a unique flavor to this recipe! 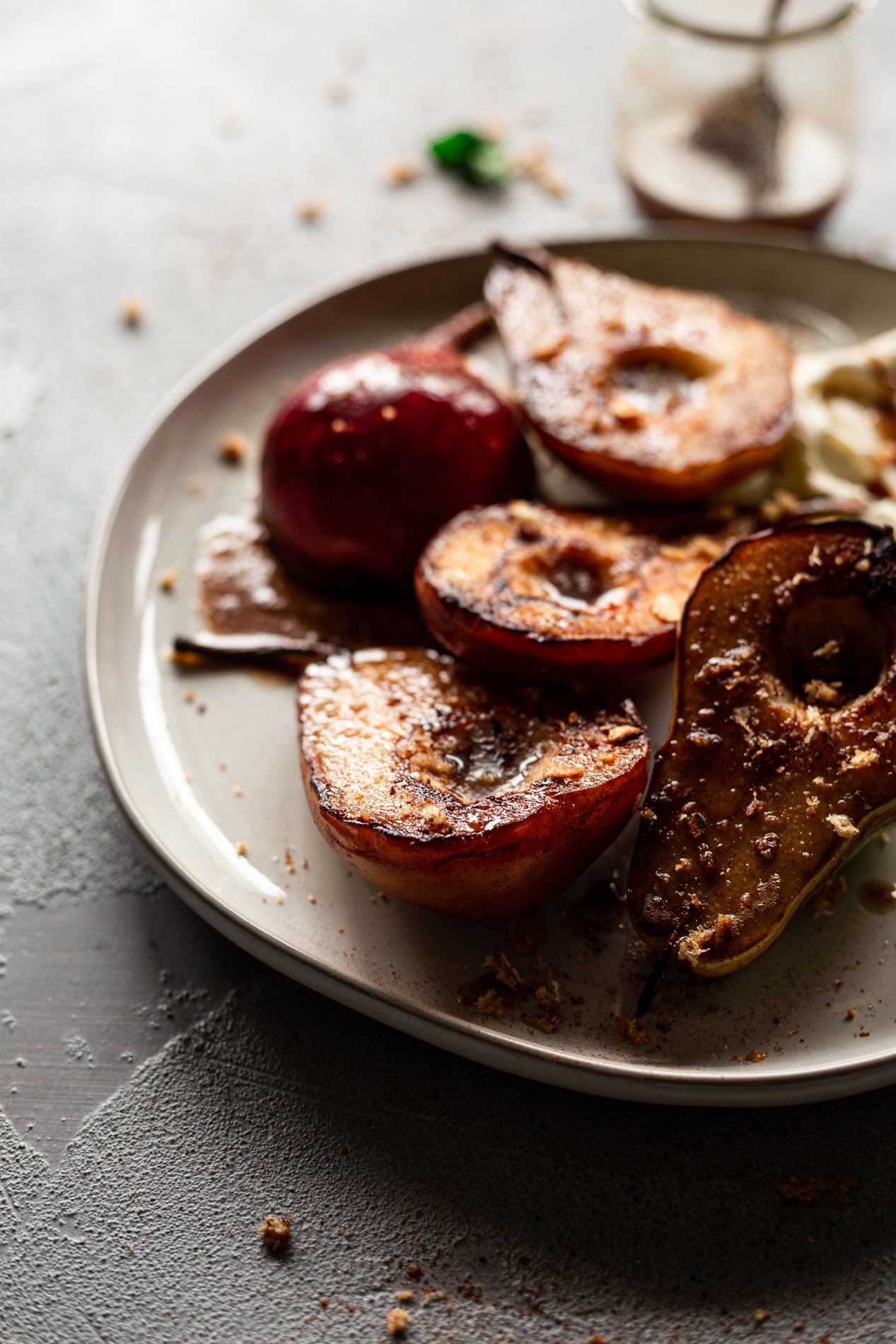 What Pears Should I Use?

I personally used a variety of bartlett, bosc, and red anjou pears, but here a rundown of their characteristics if you’d like to pick one up that best suits your tastes: 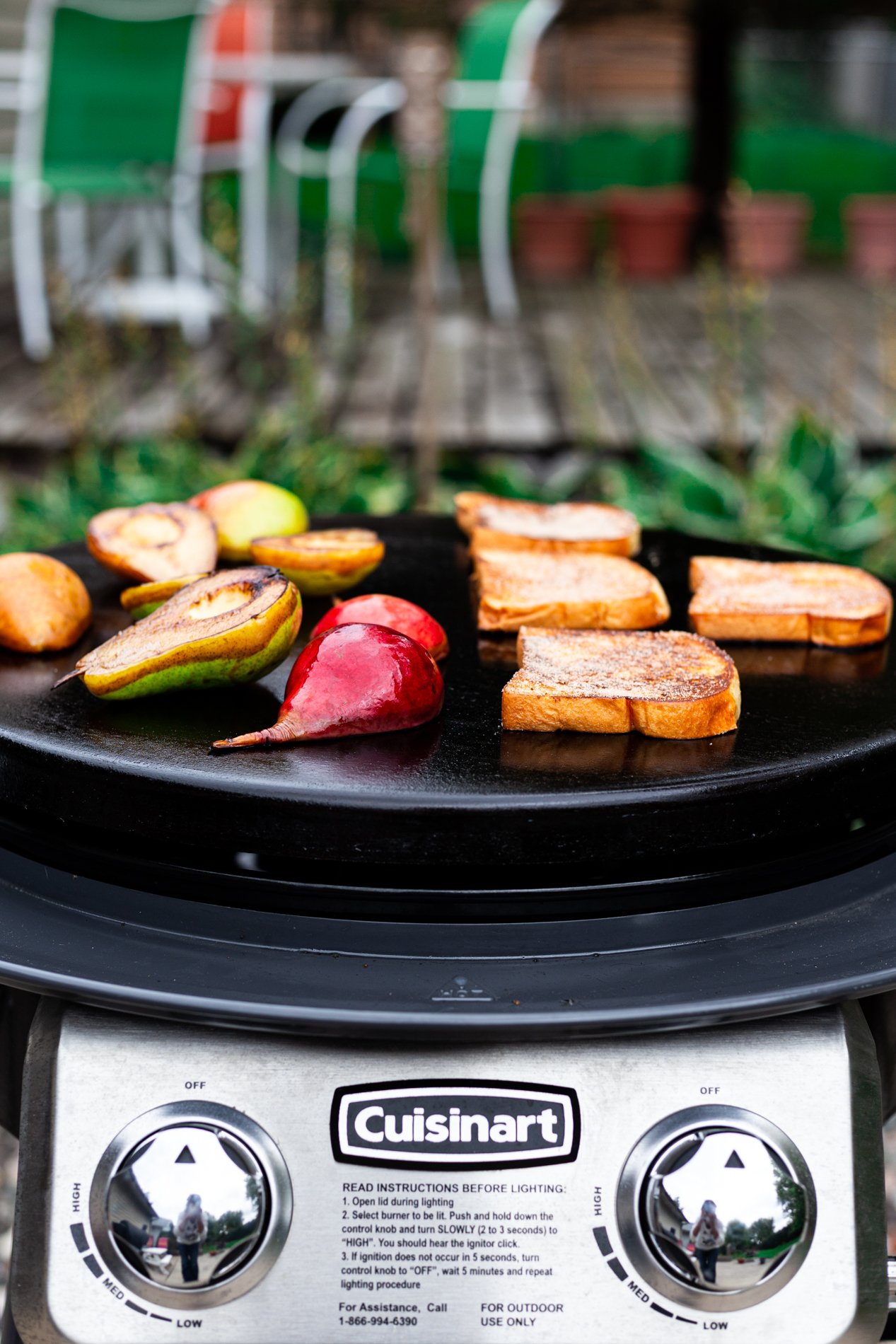 How To Make Griddle Roasted Pears

This is the main reason I love my Cuisinart 360° Griddle Cooking Center! I can roast my pears in minutes on the 22″ cooking surface instead of rotating two-three pear-halves at a time in a skillet on the stove.

But not just that, since there are two heat zones, I can work on the pears on one side and toast my bread for the sprinkles on the other, at a different temperature! Huzzah!

Steering away from traditional roasting, we turn the griddle up to medium, medium-high heat and coat the cooking area with a neutral oil such as flaxseed. Place each halved pear cut-face down and let cook for 3-4 minutes, or until very golden crisp and softened, then flip and continue cooking for another 3-4 minutes. 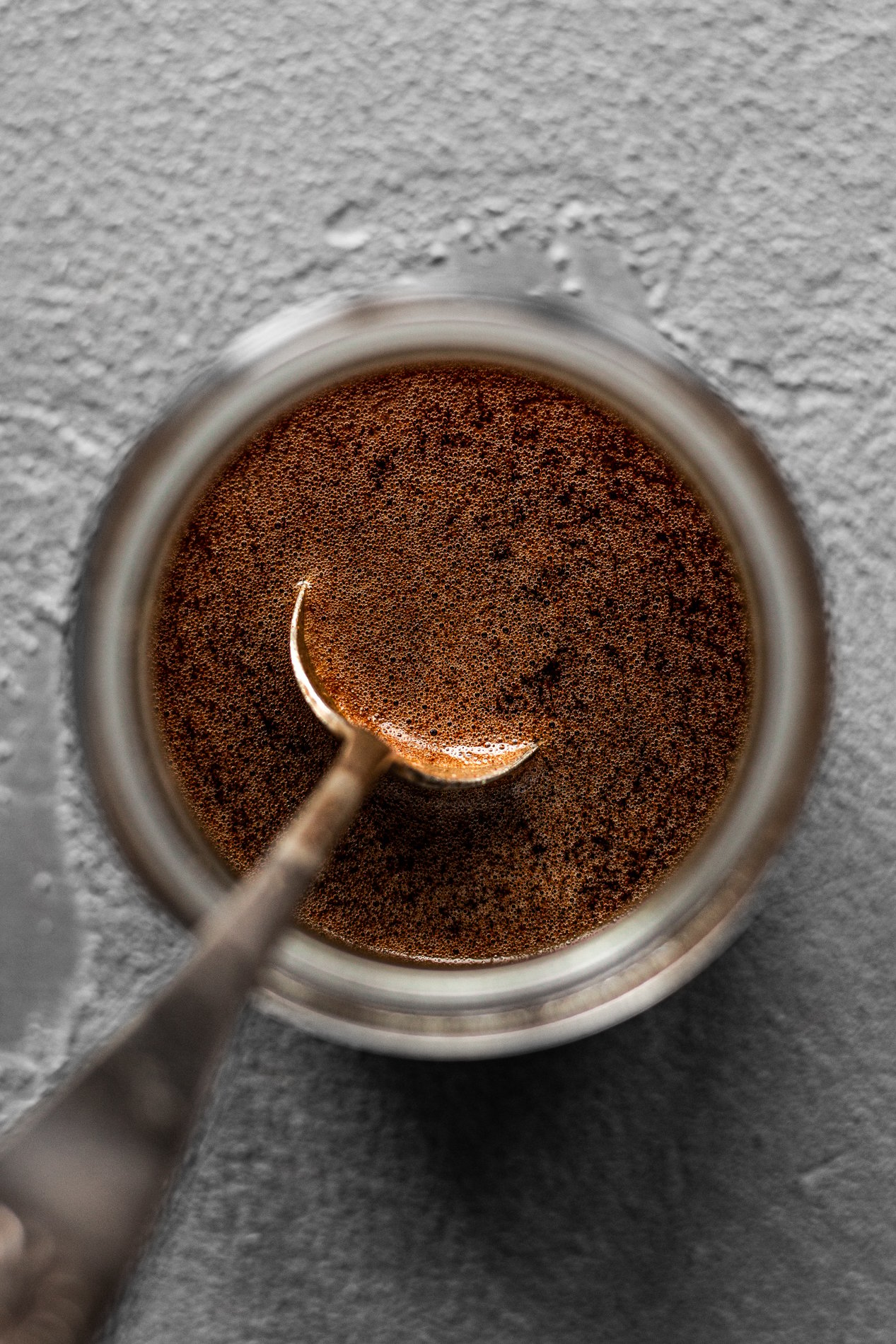 How To Make Browned Butter

Now, this isn’t just any ol’ browned butter goodness. We’re kicking it up a notch with some creamy honey, a smidge of vanilla, and the spiciness of cinnamon and a pinch of nutmeg.

Just try to not lick it all up before you finish the pears. Seriously, super hard to resist.

The great thing about this browned butter is that you can make it ahead of time and store it in the fridge like you would traditional butter. Simply let it come back up to room temperature before slathering onto your cooked pears. 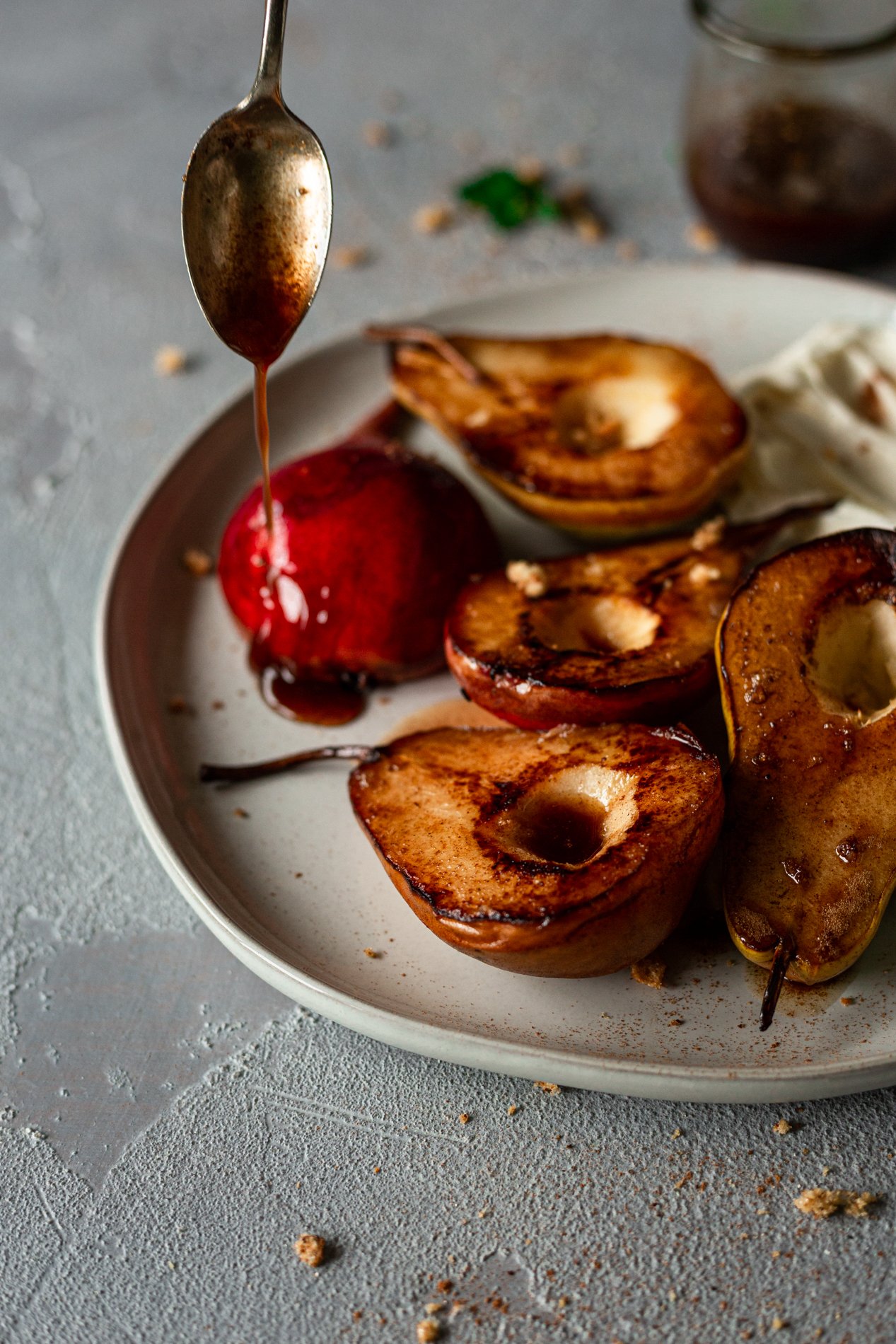 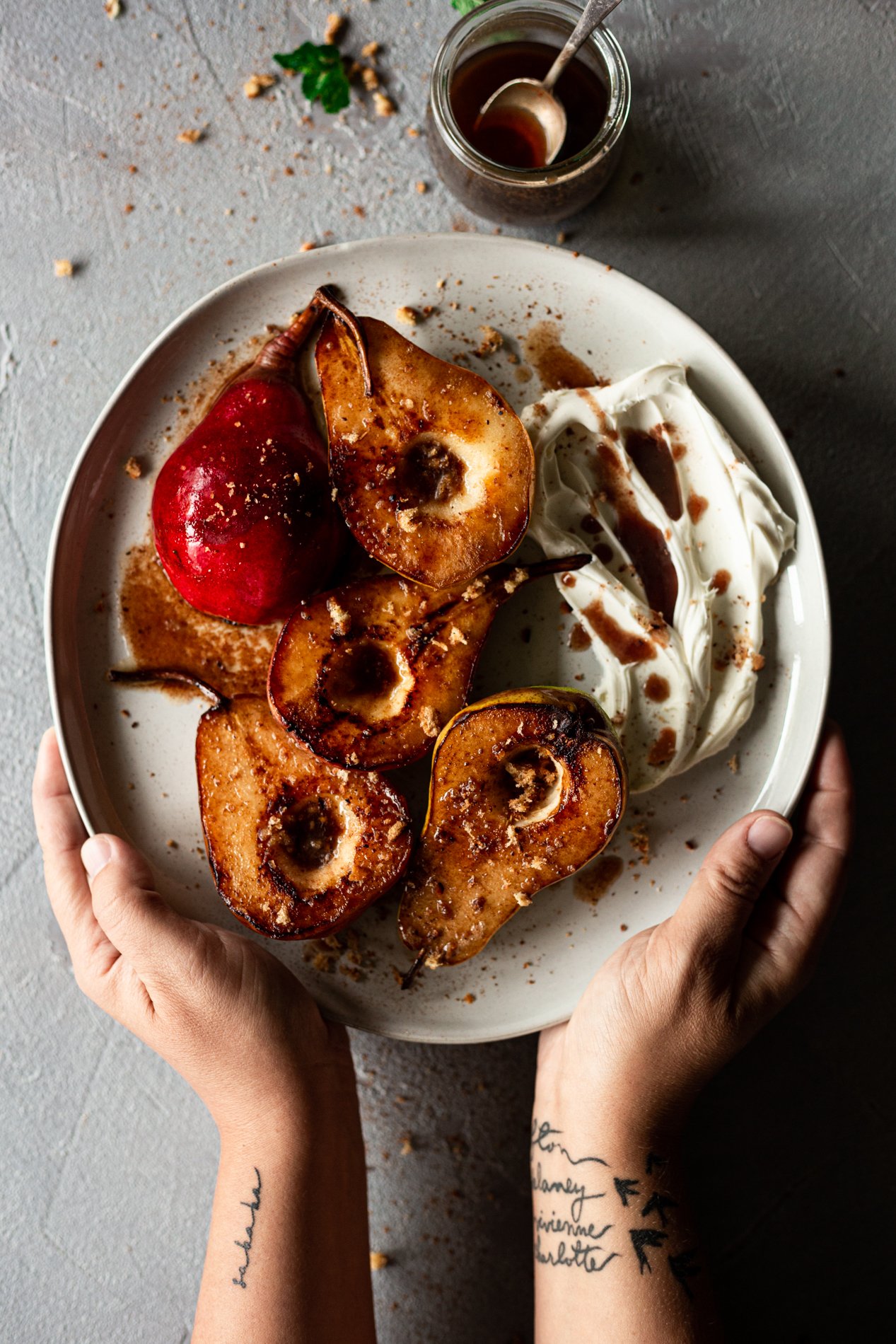 Dessert never looked so good, especially when you whip up these magical Roasted Pears with Browned Butter! With honey, cinnamon, and vanilla, these juicy pears are perfection with a dab of mascarpone, and a hearty sprinkle of crunchy cinnamon toast crumbs. Get out your Cuisinart 360° Griddle Cooking Center and whip up the best dessert around! 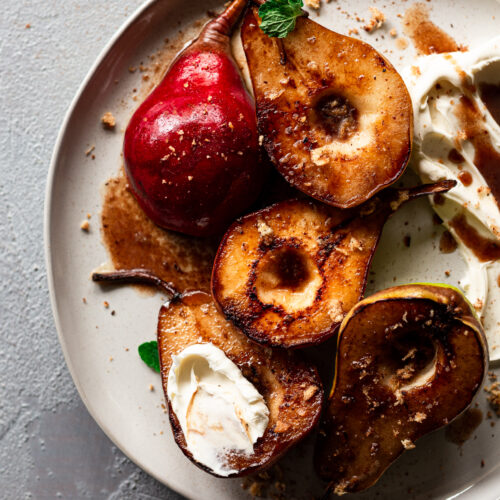 For the Browned Butter

For the Cinnamon Toast Sprinkles

For the Roasted Pears

Adapted from Half Baked Harvest