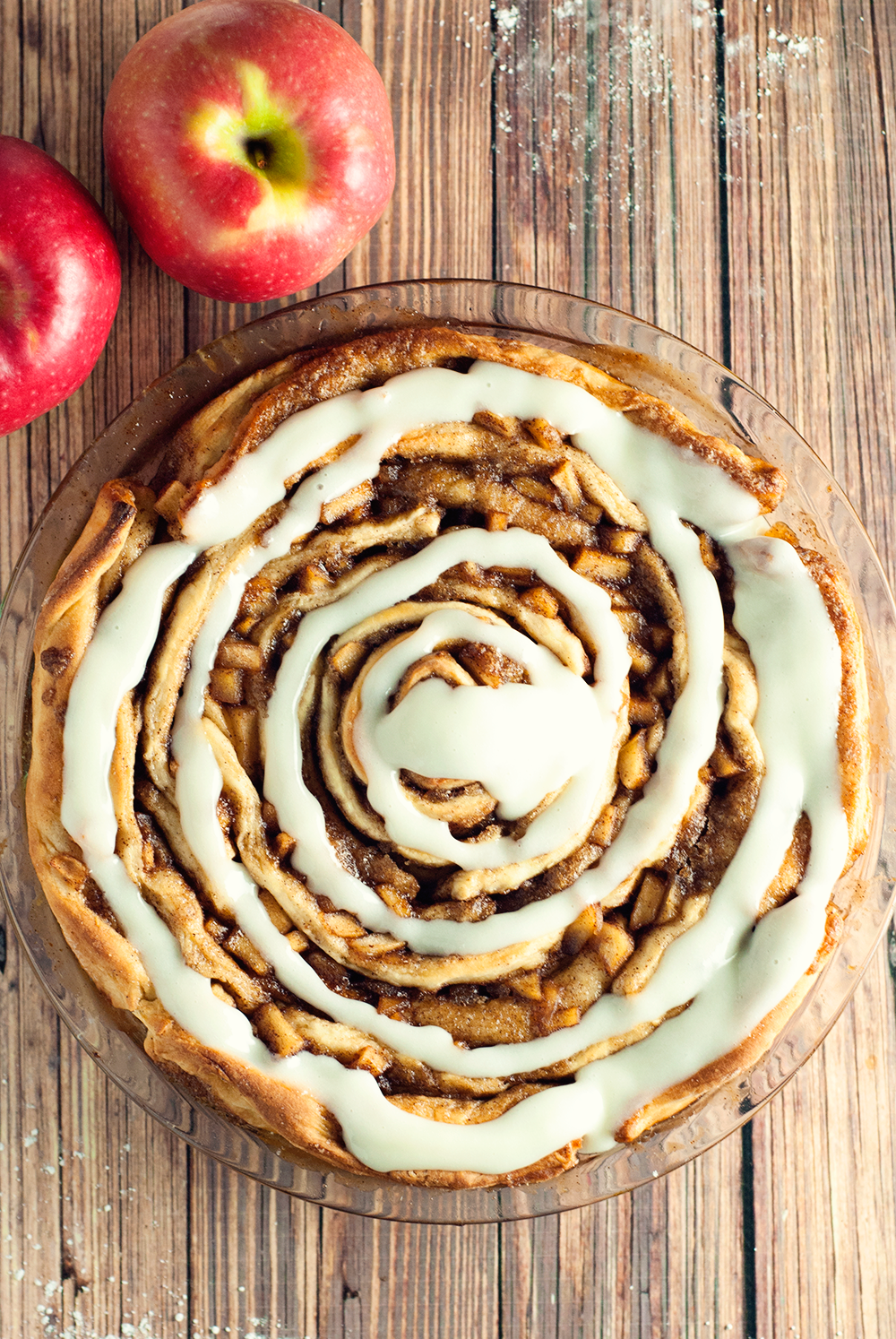 I’ve been testing some new recipes lately, mostly toying with variations of my classic Christmas breakfast. Ever since I was little, we always had cinnamon rolls, which I love. I mean, I adore cinnamon rolls. Gooey, sweet, tasty, nom nom nom nom. In muh mouth, please. You know what else I love? Cake. Cake is awesome. So yeah, light bulb moment here. Why not make a cinnamon roll cake? Too easy. Let’s pump up the flavor on this bad boy and make a spiced apple cinnamon roll cake! 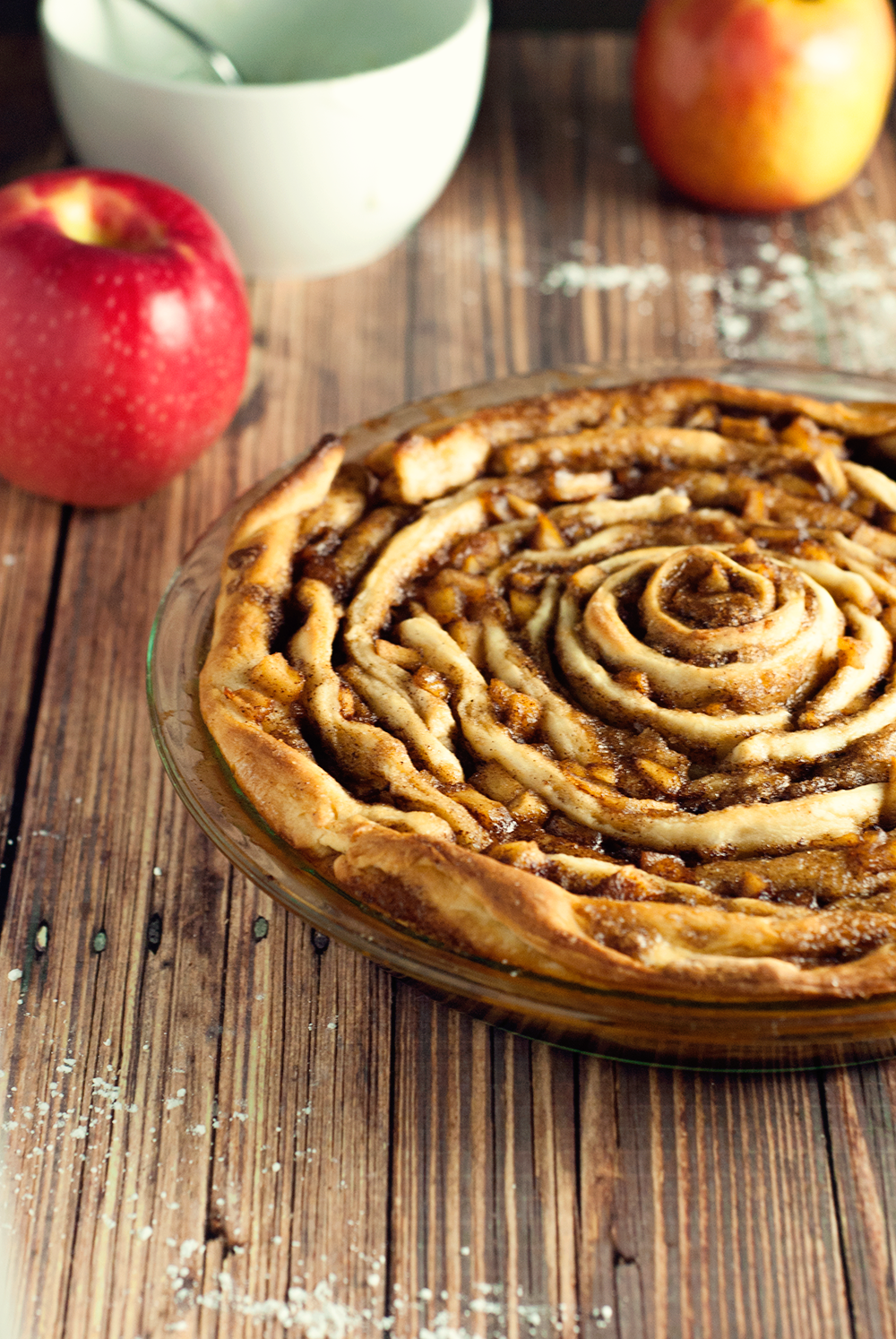 To make this spiced apple cinnamon roll cake, I started with my standard cinnamon roll recipe, but I decided to shake things up by using I Can’t Believe It’s Not Butter!® instead of regular butter. As you can see, it turned out beautifully. And, by the way, have you heard? I Can’t Believe It’s Not Butter!® has been reformulated, so now it only contains simple, real ingredients; ingredients you can read and actually know what they are! Plant-based oils, purified water, and a pinch of salt! Talk about delicious goodness, right there, am I right?

Before I started the dough though, I prepped the apples. I didn’t want them to be crunchy in my cake, so they needed to be cooked a bit first. I peeled and diced a single large apple and placed it in a pot with about ¼ cup of water and spiced, then cooked on medium low for about 10 minutes, til they are nice and soft, but not mushy. We don’t want applesauce, after all. I then melted some I Can’t Believe It’s Not Butter!® and prepped the filling for the cinnamon roll cake. I may or may not have enjoyed a bite or three of the filling. So delicious. Then I made the dough, rolled it out, layered out the filling and the apples, then used a pizza cutter to cut the dough into thin strips. I rolled up the first strip into a basic cinnamon roll and place it in the middle of a pie round, then took the next strips and wrapped them around the first piece until it was essentially one giant spiral! 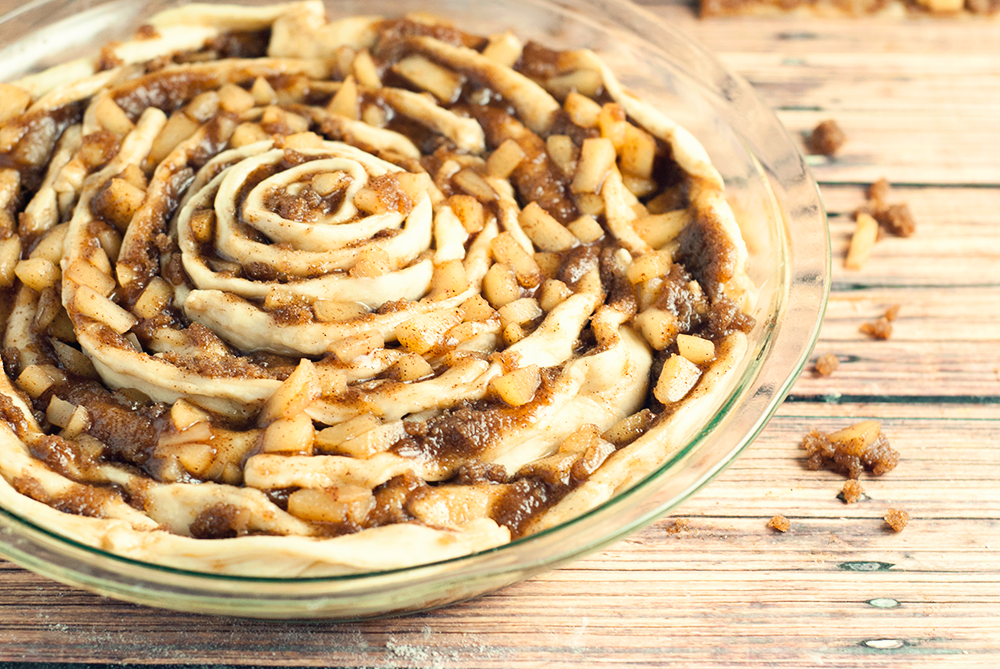 I had a really hard time not eating this while it was raw, it looks so good. So good. But alas, raw dough isn’t nearly as tasty as baked, ha. I iced my spiced cinnamon roll cake with some cream cheese mixed with powdered sugar and milk, but if that’s too sweet for you, grab some more I Can’t Believe It’s Not Butter!® and have it on a hot slice, it’s spreadable right from the fridge, which is awesome, in my opinion. Have you ever pulled out butter and tried to spread it on bread cold and the bread just disintegrates under the effort? That is sadness. But not with I Can’t Believe It’s Not Butter!®, which has 0g Trans Fat, by the way, and zero partially-hydrogenated anything. Because, like I said, it’s made with real ingredients. Holla! 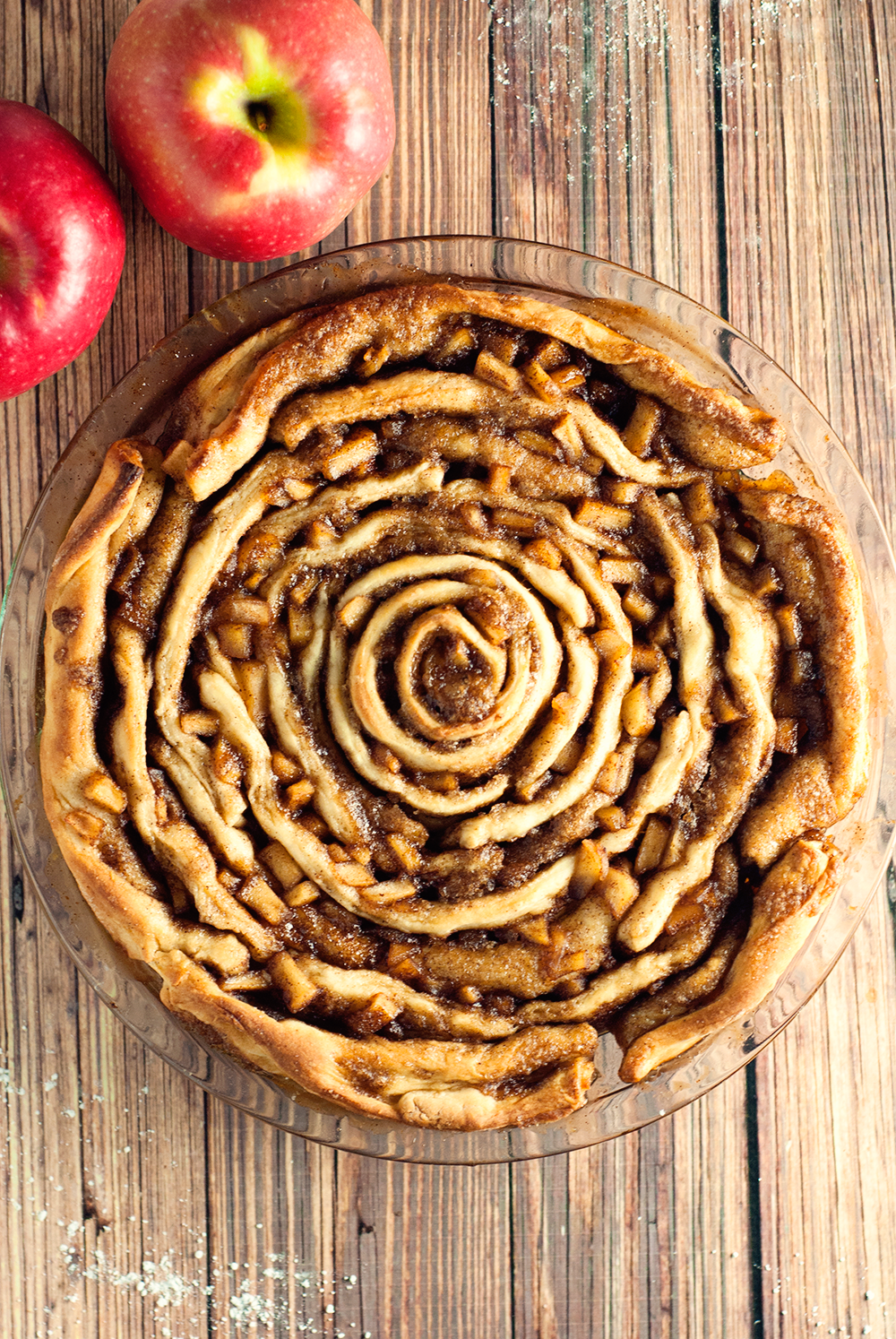 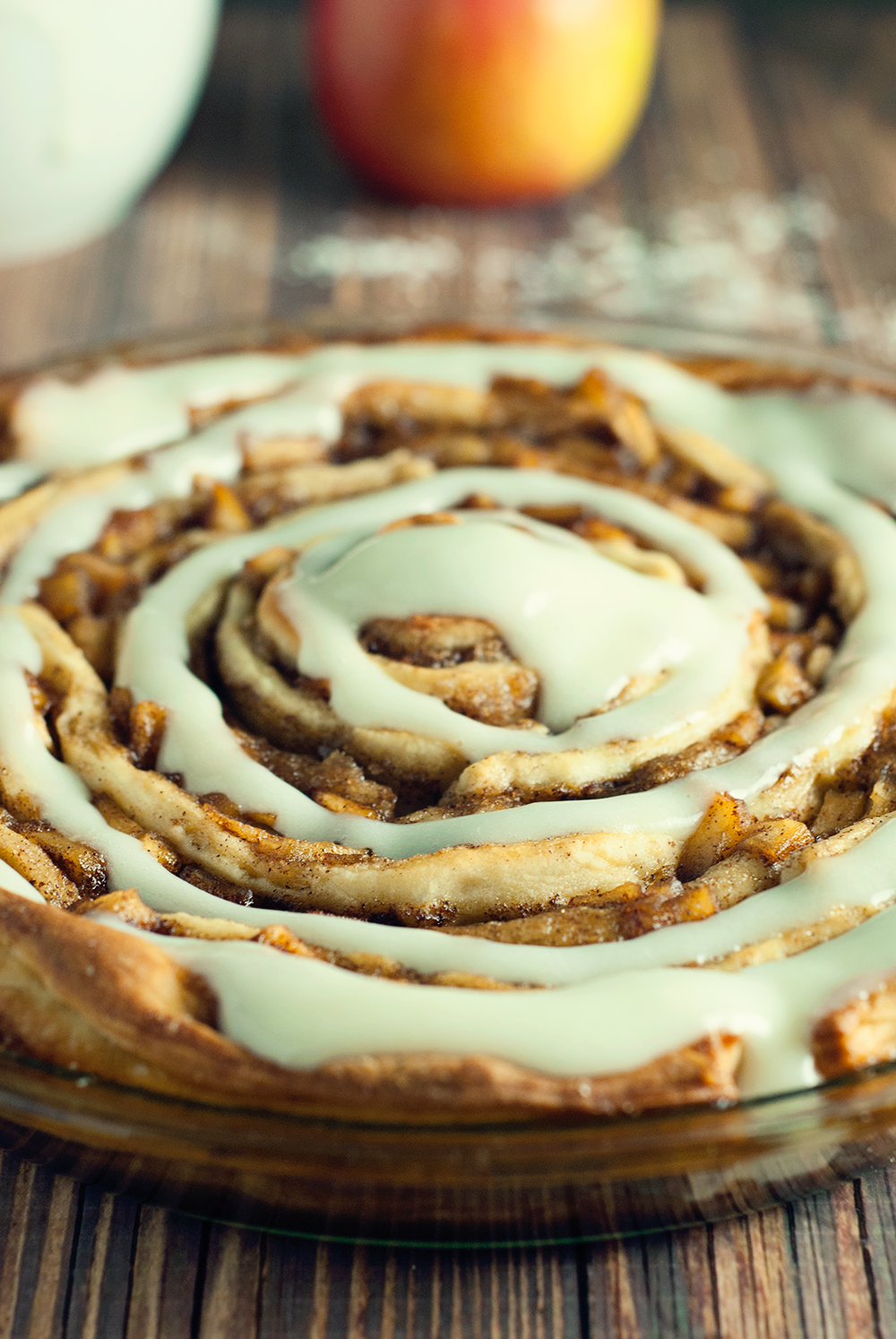 Oh hey! Did I forget to mention that this recipe is also yeast-free? YES! Double-plus bonus, for sure! No waiting for it to rise, or set overnight or anything like that. You can make it in the morning, wham bam DONE, delicious! So shall we get to it then? 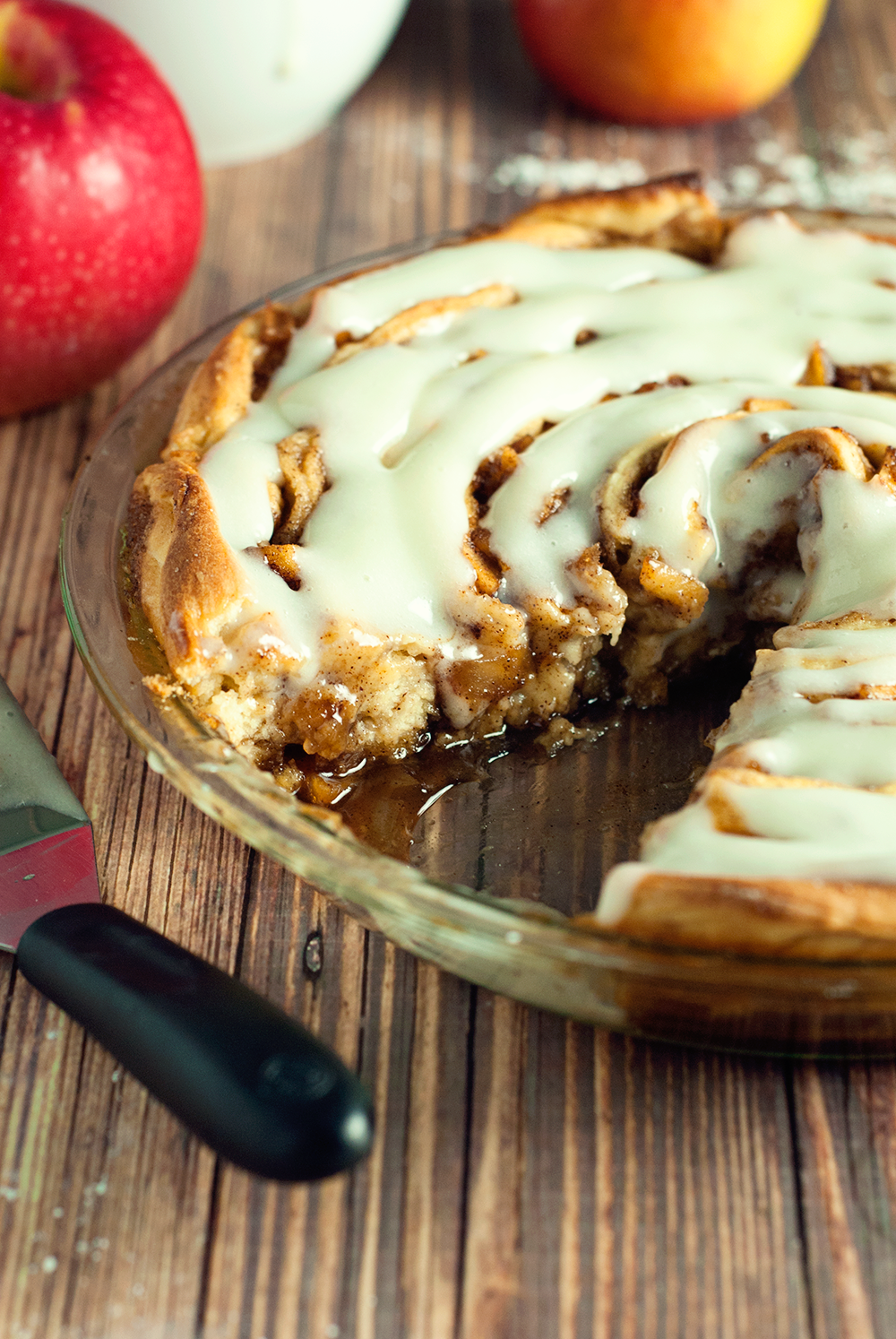 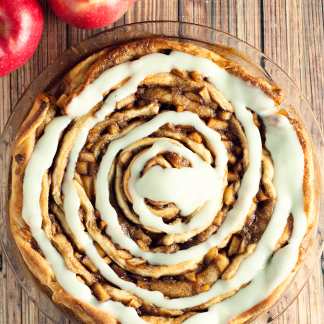 Ready to try this spiced apple cinnamon roll cake recipe? Grab yourself the newly amazing I Can’t Believe It’s Not Butter!®, and let them know what you think by leaving a review here! I promise you are going to love it’s flavor and utility; you can check out some more great recipes here!

Make sure you have your slice of cake with my Pumpkin Spice Latte, or a delicious Berry Smoothie!

I was selected for this opportunity as a member of Clever Girls and the content and opinions expressed here are all my own.
« Share The Joy With Cookie Butter Stuffed Chocolate Chip Cookies + Truffles
White Chocolate Eggnog Latte »