Published: May 9, 2019 by Karly · This post may contain affiliate links

You only need one skillet to prepare these flavorful asada tacos marinated in authentic seasonings and a super secret ingredient you can discover below! As far as street tacos go, tacos de asada are the gold standard of street fare, so if you’re craving easy Mexican recipes for dinner, look no further than these super simple, super flavorful Carne Asada Mexican Street Tacos!  Yay tacos! 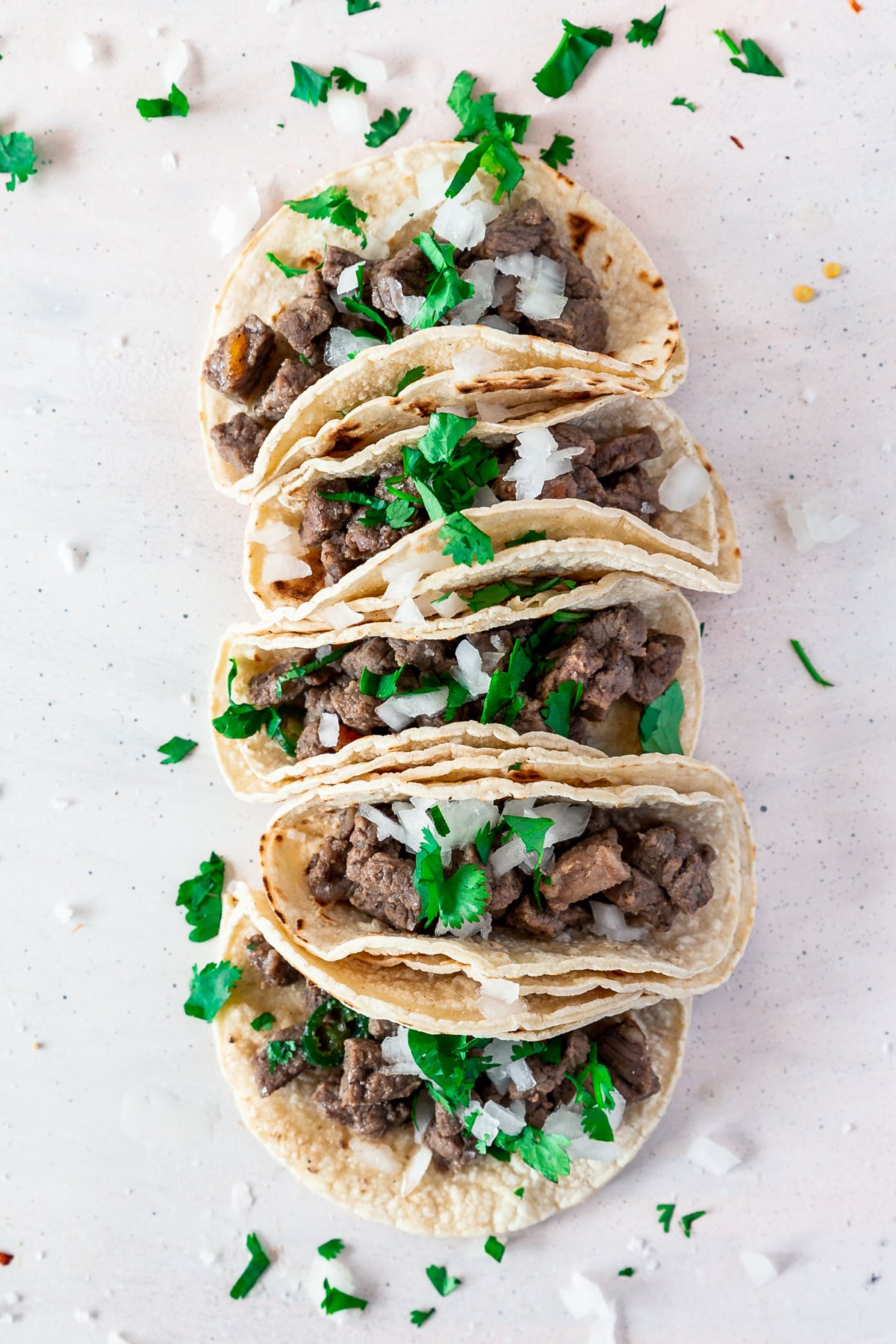 This uber-popular recipe is ready for a fancy fresh new look!

I must say, these Carne Asada Mexican Street Tacos didn’t mind waiting, because they are totally worth waiting for. Sprinkled with lovely diced onion and cilantro, and served alongside some pinto beans, these tacos are simple and delicious.

Rudy would like everyone to know that this is, in fact, his recipe. He is very proud of it, and he has every right to be because these tacos de asada are kind of the bomb. And by kind of, I mean totally, completely, absolutely.

He was practically jumping up and down like an excited schoolgirl over the fact that these little babies were going up on the blog. So do, please, thank Rudy for these tacos. 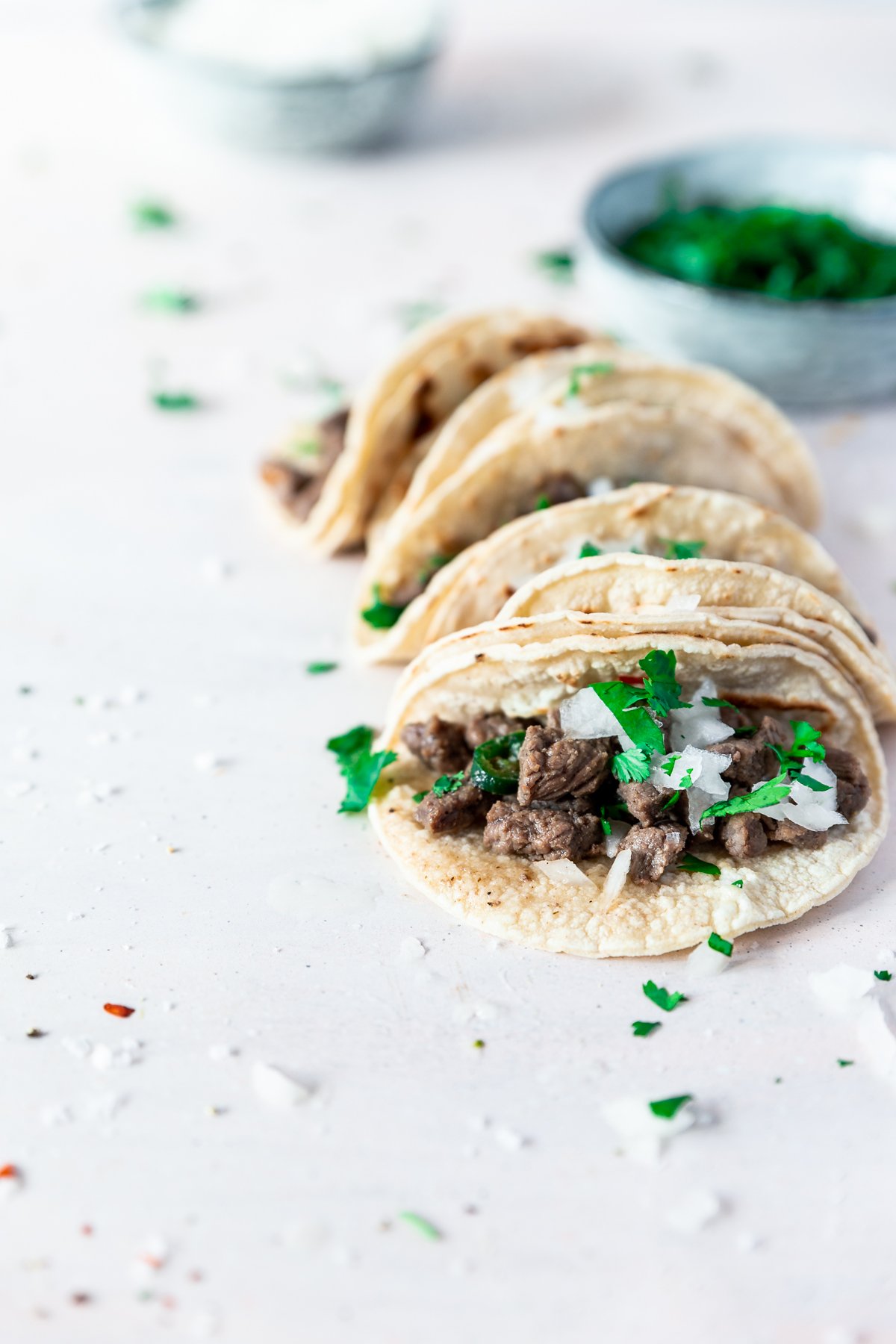 What Are Asada Tacos?

Carne asada is simply steak chopped up or sliced and served with onions and cilantro.

As a street food, carne asada is often cooked on a plancha and held in warmers with all the spices and juices, keeping the meat supple and flavorful.

For this street tacos recipe, we used a similar concept by cooking everything down in a large cast iron skillet, ensuring the meat stays juicy. 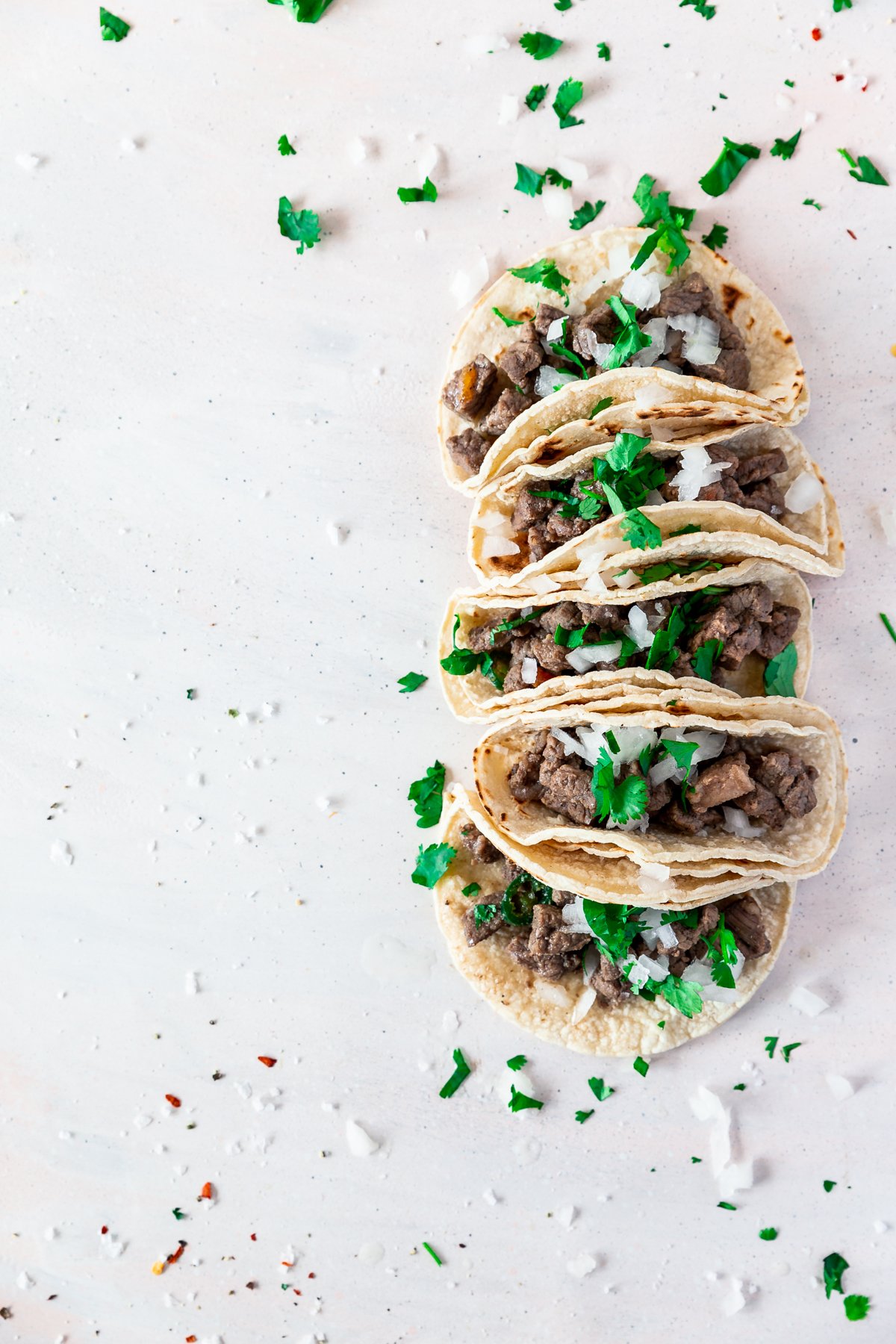 What’s The Secret Ingredient In These Mexican Street Tacos?

Are you ready for it?

What does beer do, anyway, right?

It actually tenderizes the meat, which is great when you’re using cuts like flank or skirt steak, which are inexpensive but often on the tougher side. As the beer cooks down, the alcohol dissipates, leaving behind only the flavoring components from the beer, which imparts a rich, earthy flavor. 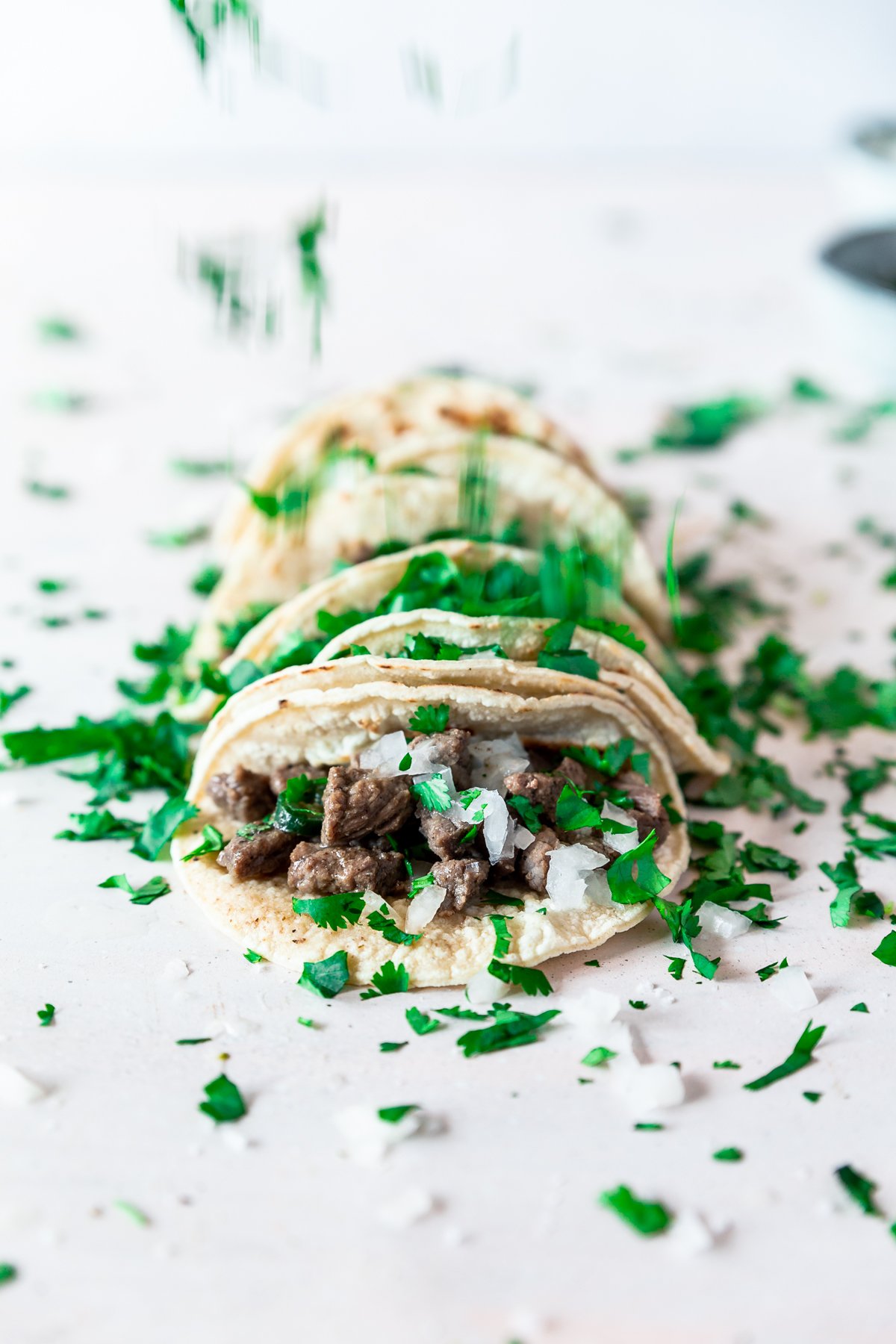 How To Make This Mexican Street Tacos Recipe

It’s simpler than you think!

Seriously, it’s that easy. And since you really only need the one skillet, cleanup’s a breeze as well. You can toast up the tortillas on a comal, or over an open flame if you have a gas stove, or just wrap them in a damp towel and throw them in the microwave. I prefer charring them, clearly. 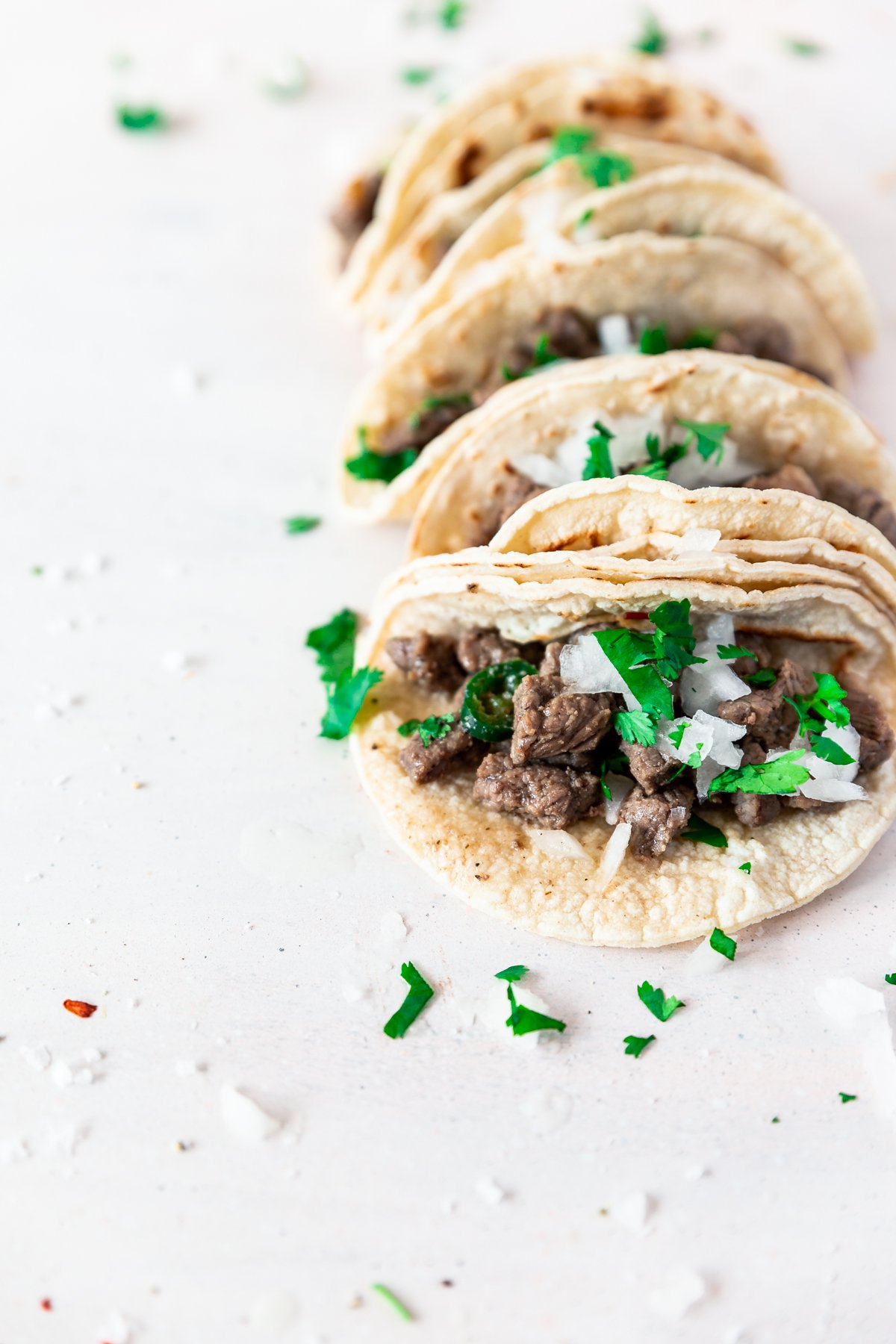 Grab your skillet because that’s all you need to make these amazing tacos de asada for your Taco Tuesday eats! Flavorful and authentic, this Mexican street tacos recipe will easily become your favorite meal! 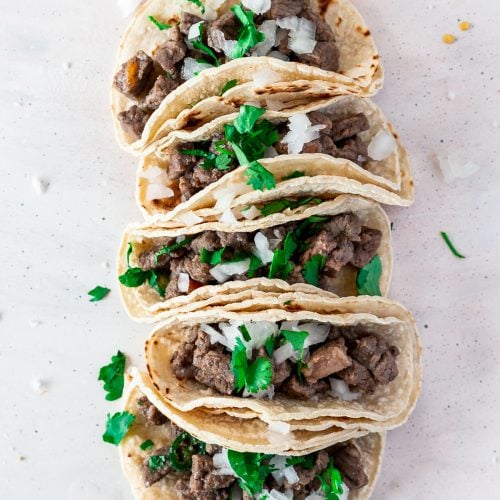 *If carne asada is not carried in your local grocery store, you can use top or bottom round, flank, or skirt steak. A thin, lean meat is best.