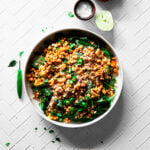 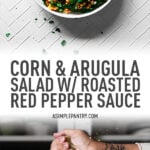 This Corn and Arugula Salad Recipe with Roasted Red Pepper Sauce whips up in minutes and is full of flavor! With quick-roasted corn, this simple side dish pairs perfectly with pretty much any meal, or as a standalone lunch option. Topped with optional cotija cheese, this recipe is a fun twist on an inspired dish from my trip to Israel! 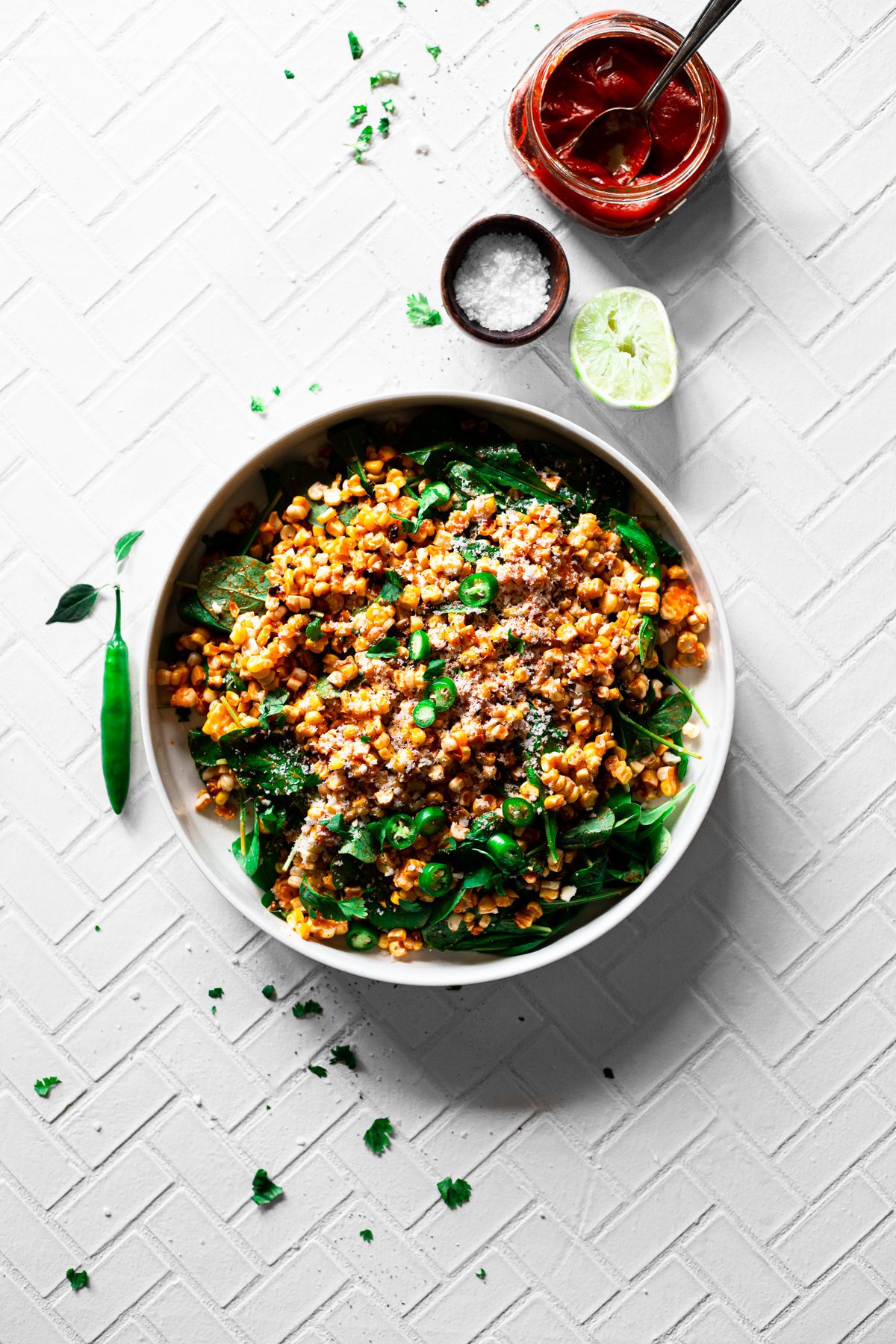 Why Make This Recipe

You all know my love for corn. From my fajita pork with street corn dinner bowls, to street corn salad, to chorizo burger with corn fritters, corn is kind of my thaaaaaang. It’s delicious!

I tried a version of this salad while touring with the wonderful people of Vibe Israel, and I’ve been obsessed with it ever since. I’ve really been enjoying diving into the freshness of Israeli cuisine, and this recipe was inspired by all the bold flavors I got to experience around the country.

It’s so fast to throw together, and so full of flavor, and it even uses my new fave condiment, my red bell pepper paste! 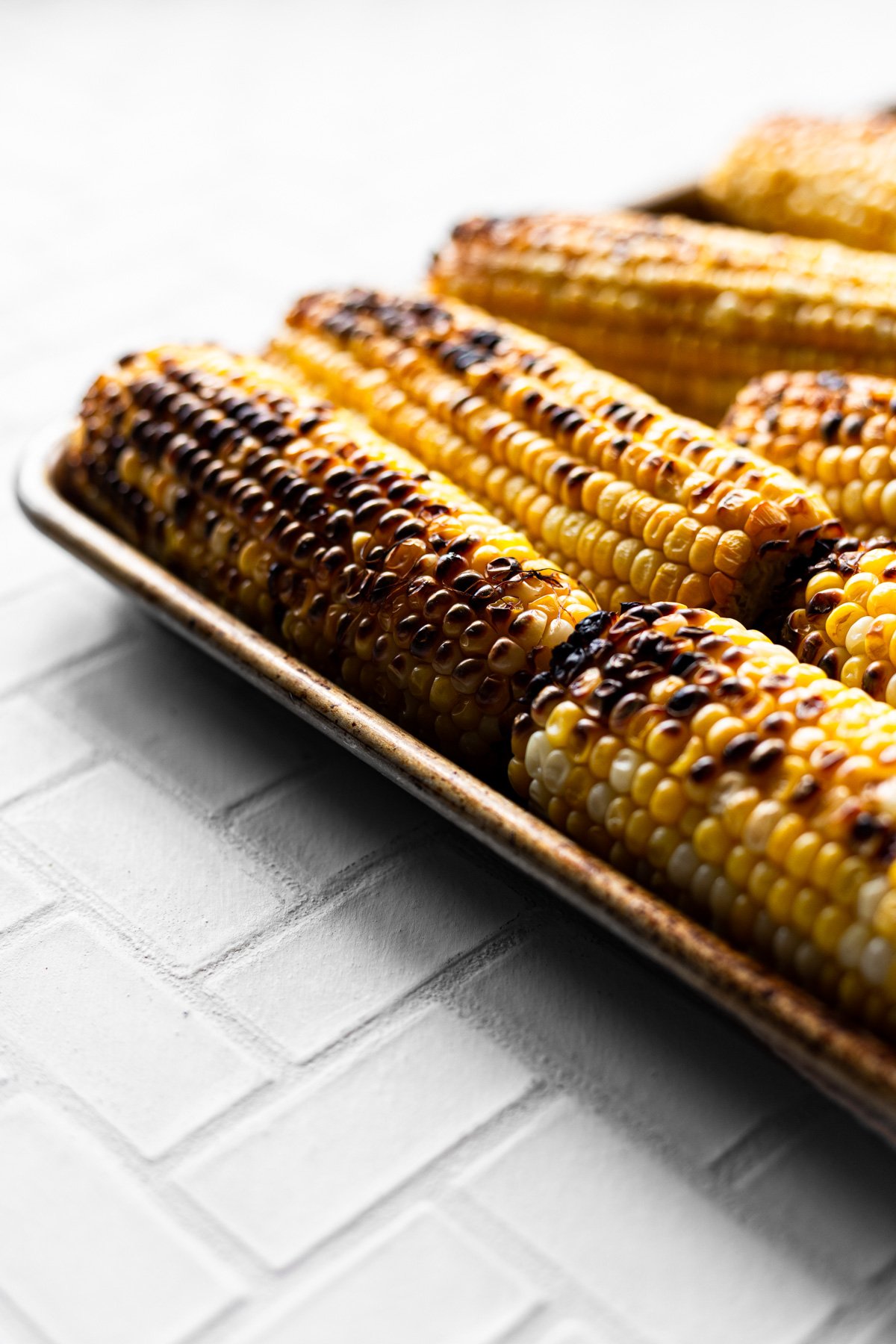 How to Roast Corn

When I originally made this dish, I roasted the corn in the oven. To do that, you want to set it to broil and put the rack near the top of the oven.

From there you place the corn in a sheet pan and rotate the ears frequently as the kernels char, because you want them nice and blackened, but not mushy. The process can take about 10 minutes or more, and once charred you let the corn cool enough to touch so you can cut the kernels off!

I wanted to make this even faster, however, so on my next attempt, I cut off the kernels first and pan-charred them like I do for the chimichurri corn tacos.

Just a nice, dry skillet on high heat and you’re good in about 3-4 minutes! 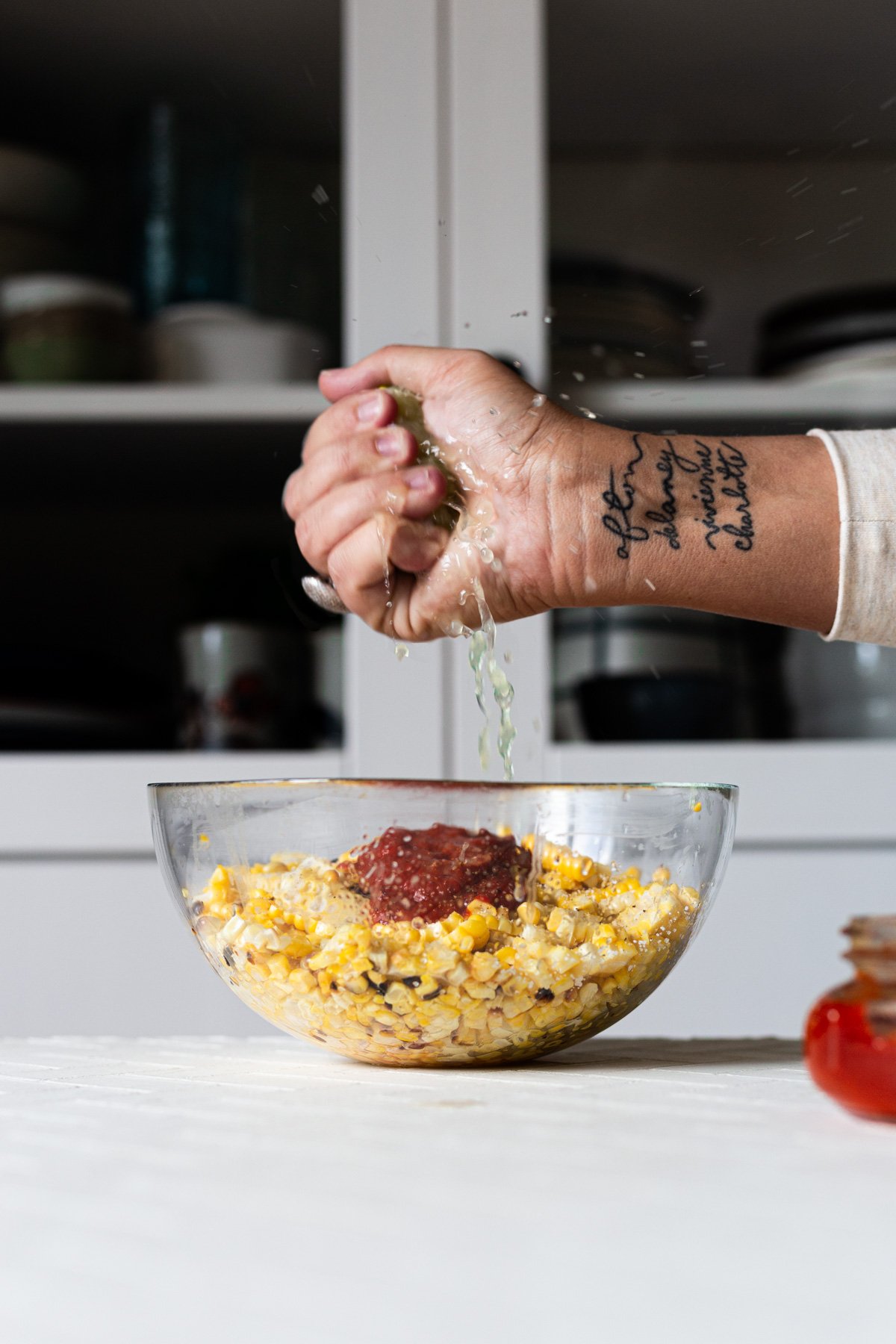 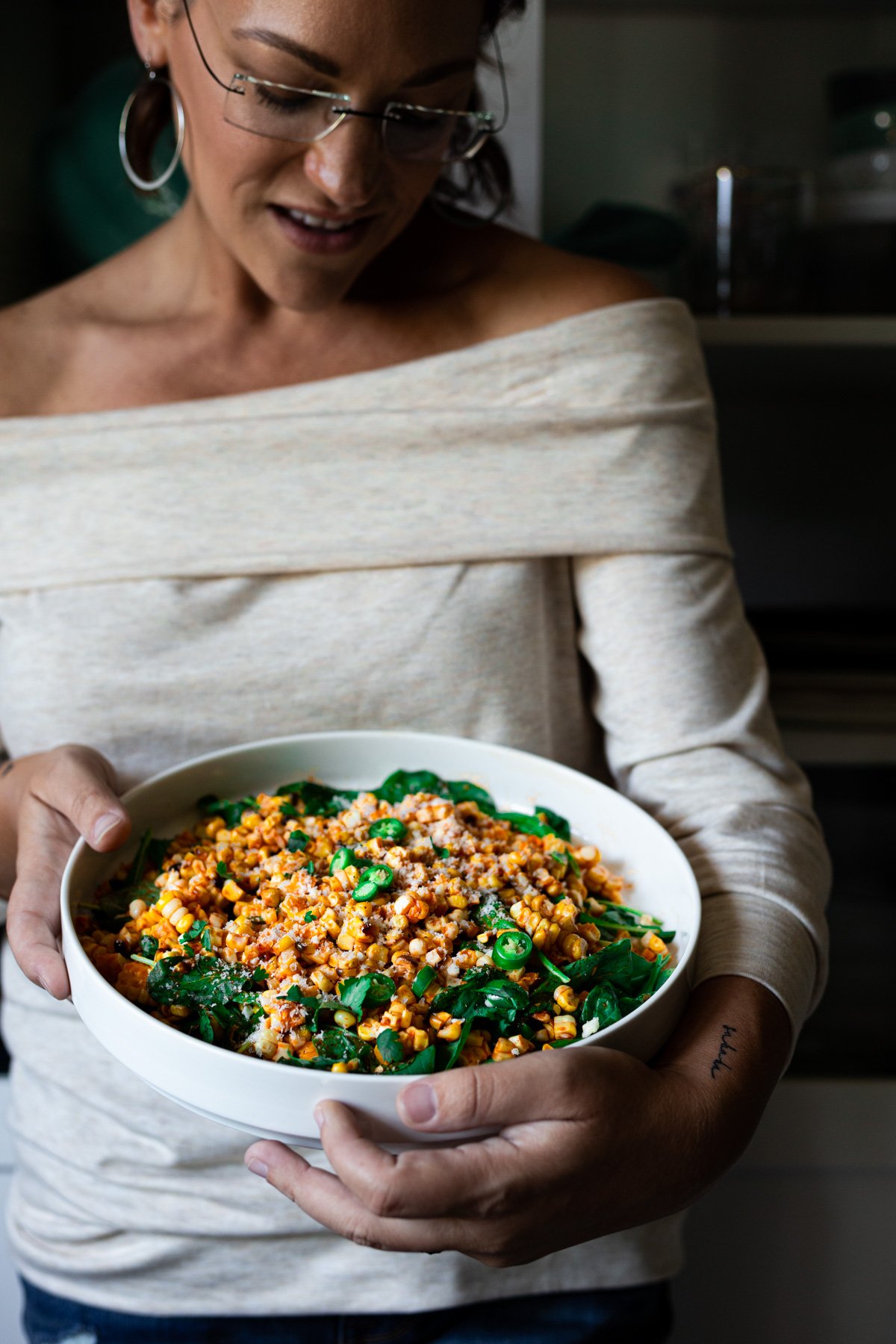 How To Assemble This Arugula Salad

You could also sprinkle some cilantro in there for good measure, if you’re feeling frisky. 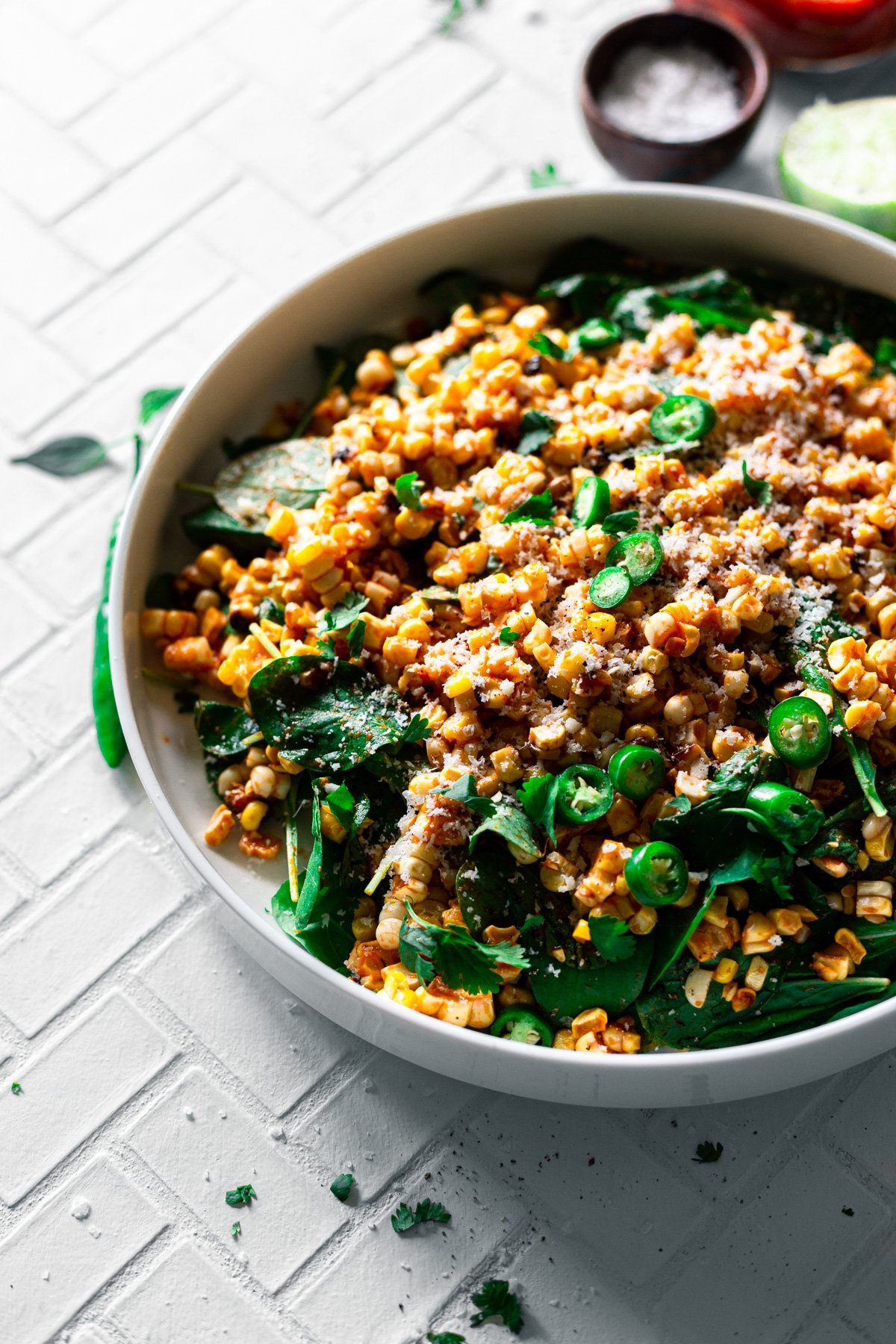 What can I use instead of red bell pepper paste?

Is this recipe vegan? 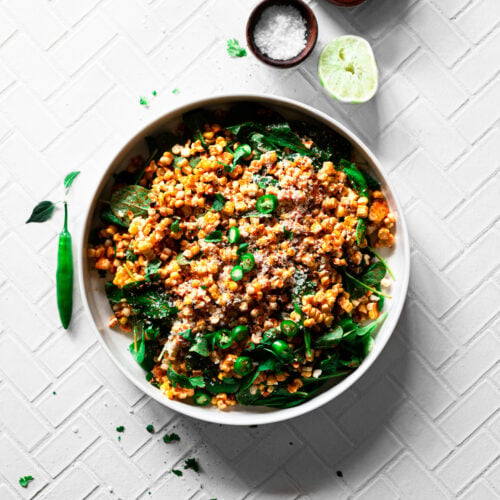 This Corn and Arugula Salad Recipe with Roasted Red Pepper Sauce whips up in minutes and is full of flavor with quick-roasted corn, pairing perfectly with pretty much any meal!

*in place of the red bell pepper paste, you can use oil-packed sun-dried tomatoes. Pat dry two and whiz them up in a blender with the lime juice. A little goes a long way, as the flavor is much stronger, so don't use too many. *omit the optional cheese to keep this dish vegan, but if you prefer a different cheese, feta makes a great substitute, especially if you use sun-dried tomatoes.