Whether you’re a tried-and-true vegan or just enjoy exploring vegan cuisine, this Instant Pot Vegan Gyro Recipe from The Vegan Instant Pot Cookbook is perfection, no matter your preference. With bold Mediterranean and Middle Eastern spices, and a lentil-walnut ragu, it mimics both the texture and flavor of a real Greek gyro, topped with a stellar homemade vegan tzatziki sauce! A hit with the whole family, learn about how to make this amazing vegan gyro recipe below, and be sure to grab a copy of Nisha Vora’s cookbook to explore more wonderous and flavorful instant pot vegan recipes! 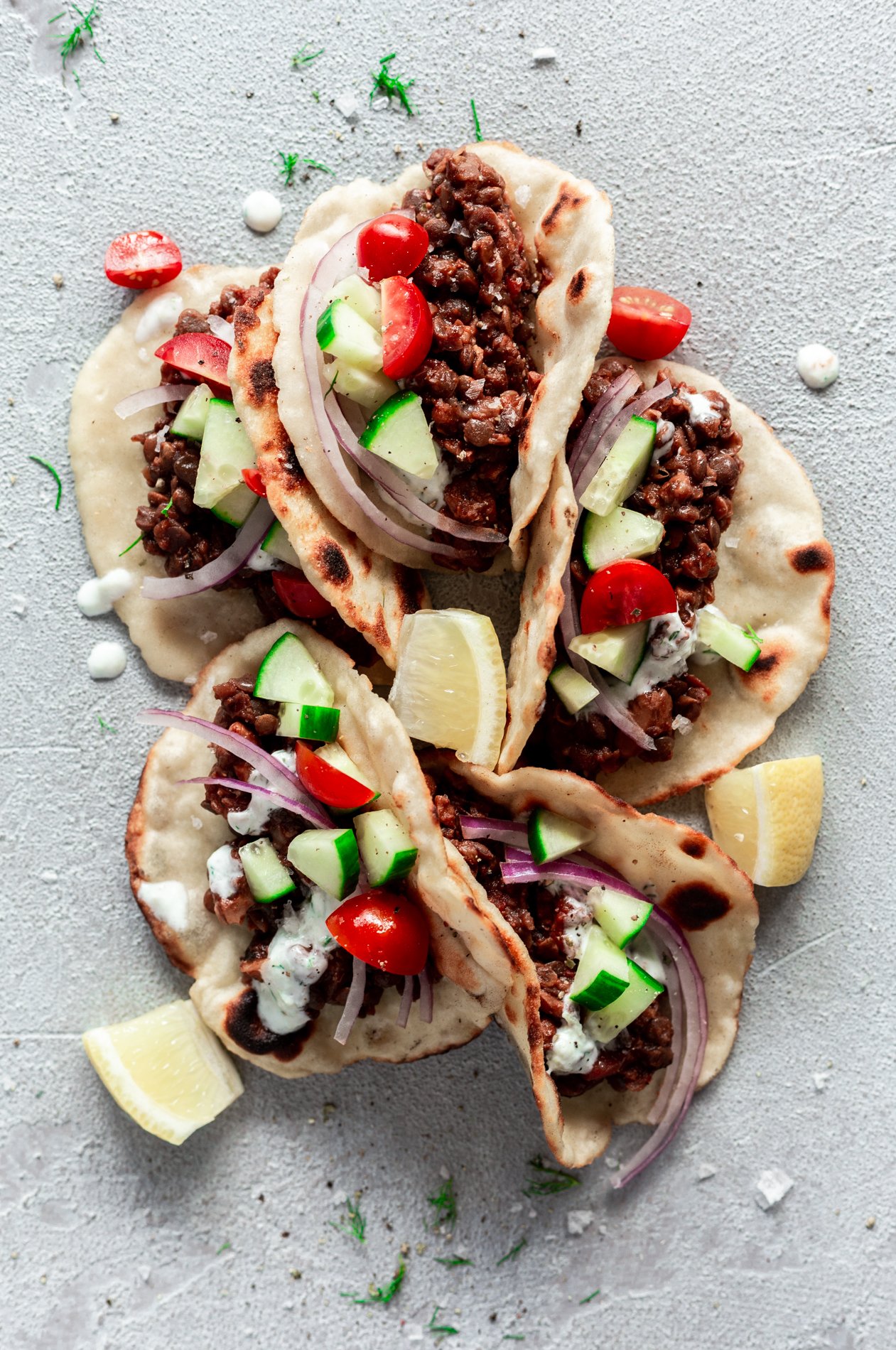 Now, we all know I’m not actually vegan.

But there is this weird thing in which non-vegans avoid vegan cuisine.

It’s nonsense, really. Vegan cuisine is for everybody. All you have to love is food!
I hosted a little vote over on Instagram the other week to decide which recipe from Nisha’s cookbook I would make for everyone. We debated between pinto beans and brown rice, israeli couscous and lentil-walnut gyros, and chili and vegan sausage soup. The gyros won by quite a large margin!

So here we are, today, bringing you the vegan gyro you asked for, and oh my, you sure did pick a good one. 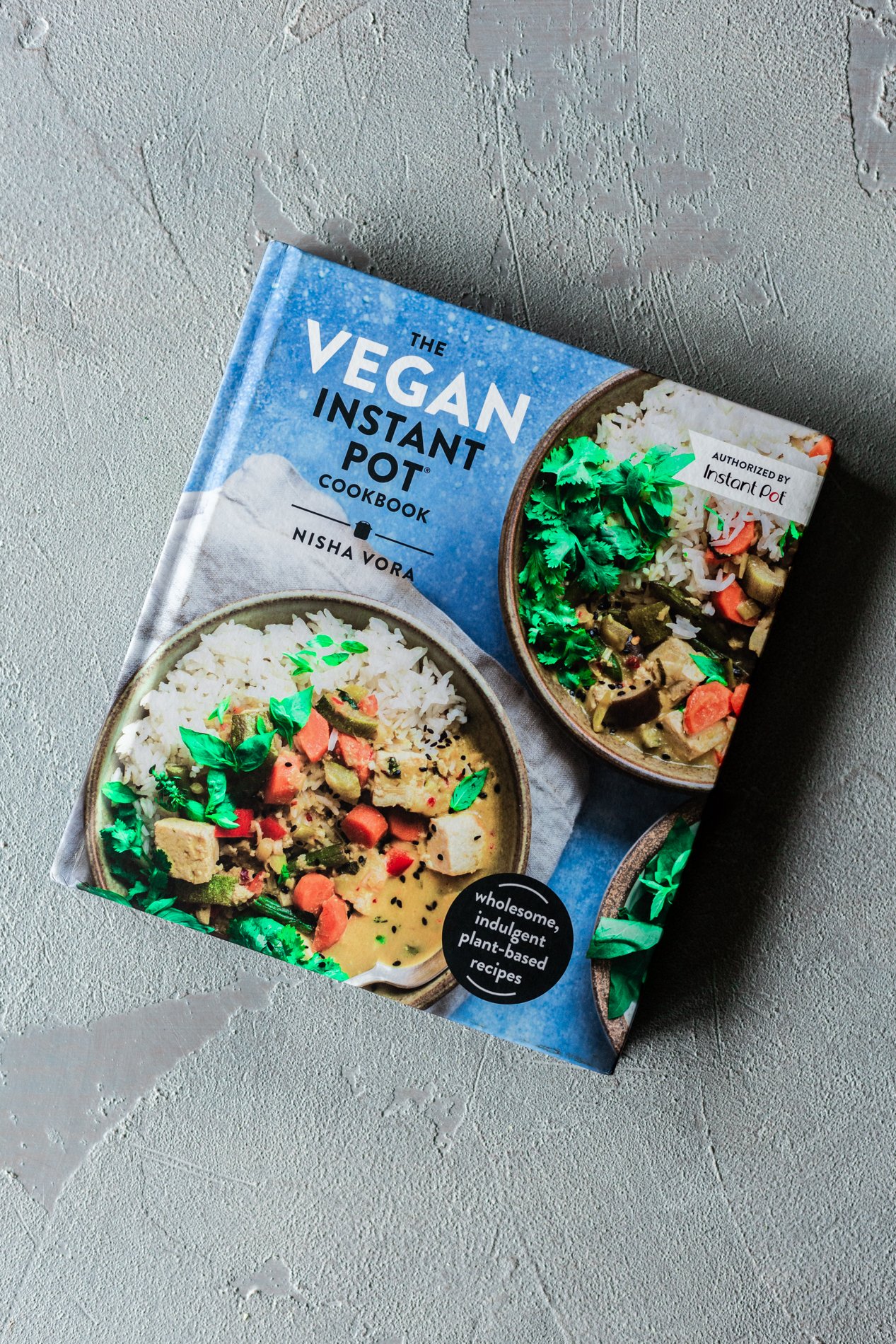 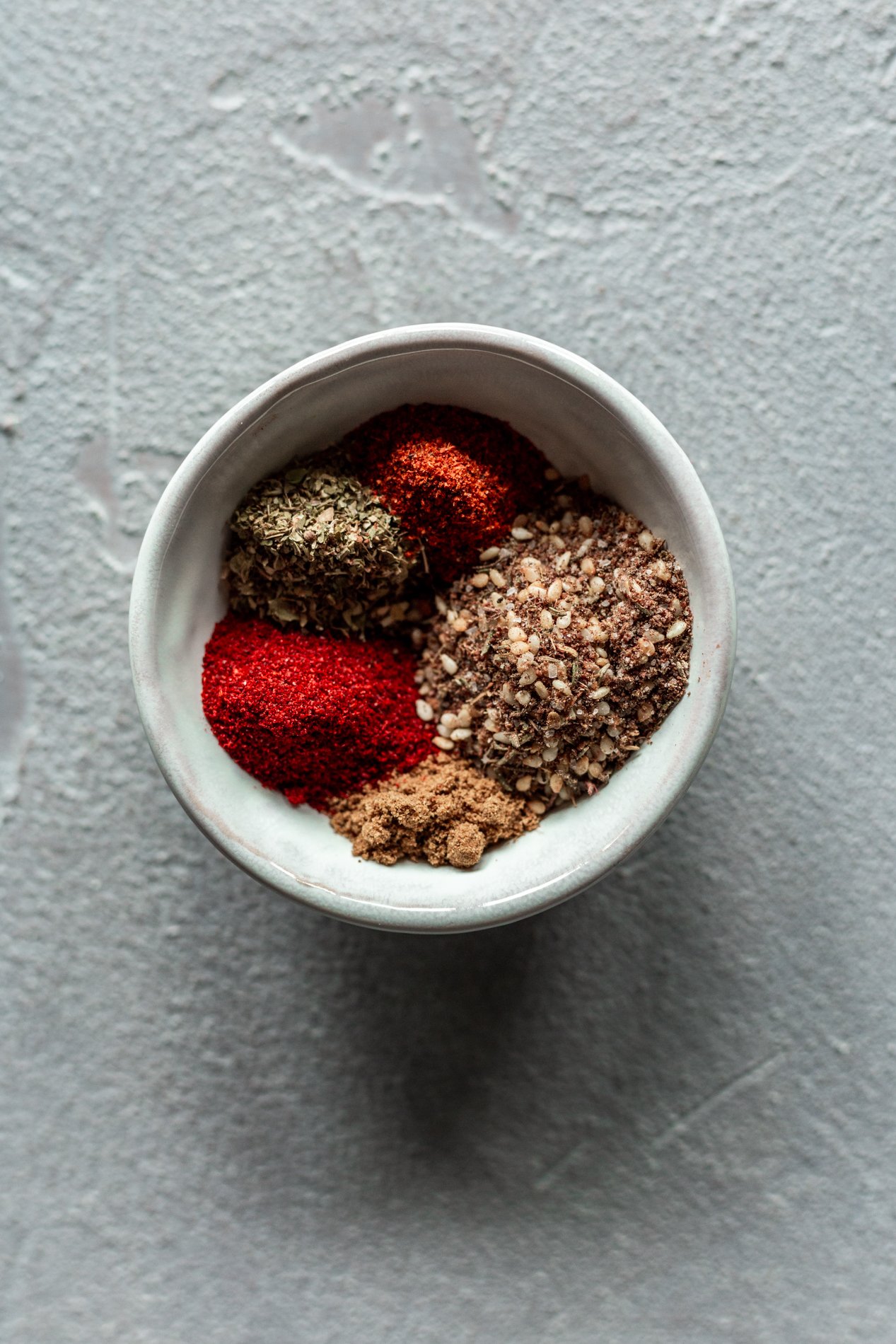 What’s In This Vegan Gyro Recipe?

The lentil-walnut ragu that makes up the bulk of this recipe is actually fairly simple!

All of that ends up right in the Instant Pot. Super simple, right?

Nisha includes her own recipe for za’atar, which is included in the recipe, but since I already have my own za’atar recipe, I used that! 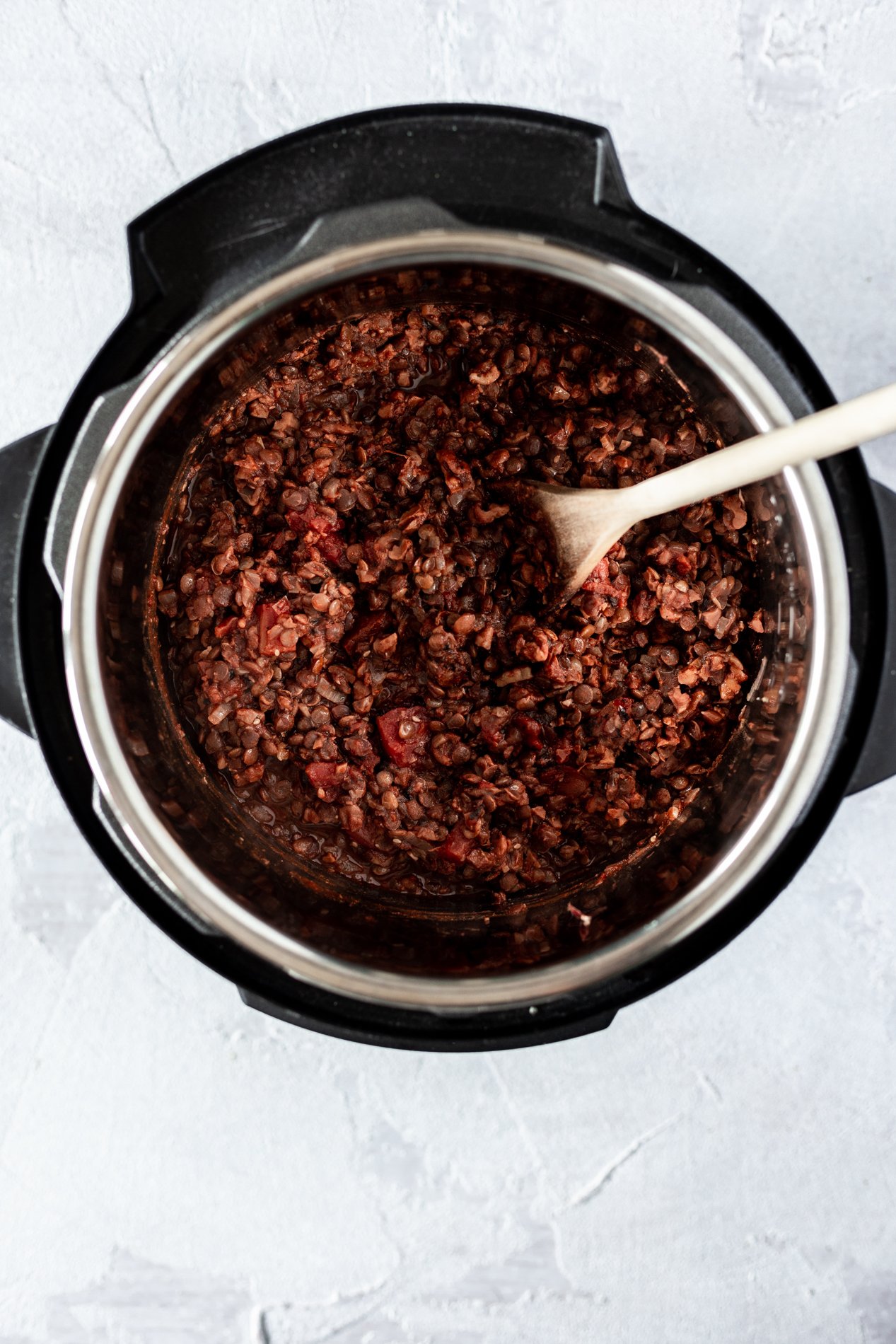 How To Make This Vegan Gyro Recipe

This recipe utilizes both the saute and pressure cooking settings, so you only use the Instant Pot to make this simple recipe. 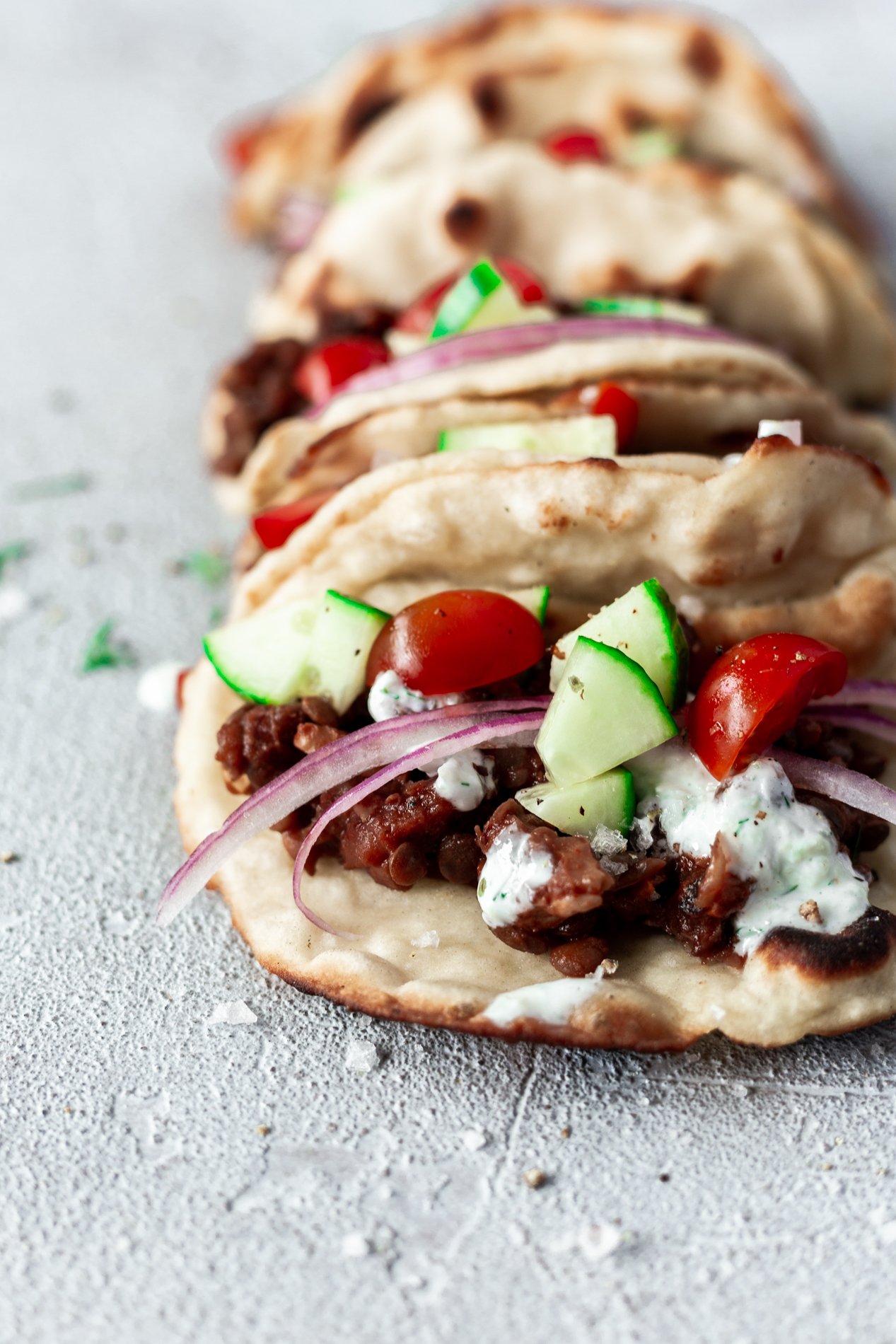 What Is Vegan Tzatziki?

Vegan tzatziki is exactly like regular tzatziki, but utilizes coconut yogurt instead of dairy-based yogurt. The thicker the yogurt, the better, in my opinion.

I like to use a flour sack cloth or cheesecloth to strain the cucumbers of liquid, but you can definitely use paper towels if that’s all you have on hand. Just be sure to make a thick layer, or it will tear when you start squeezing.

All you have to do is mix up the yogurt with the cucumber, and add some garlic, dill, lemon juice, olive oil, salt and pepper, and voila! Done and done!

It’s the perfect complement to these vegan gyros. 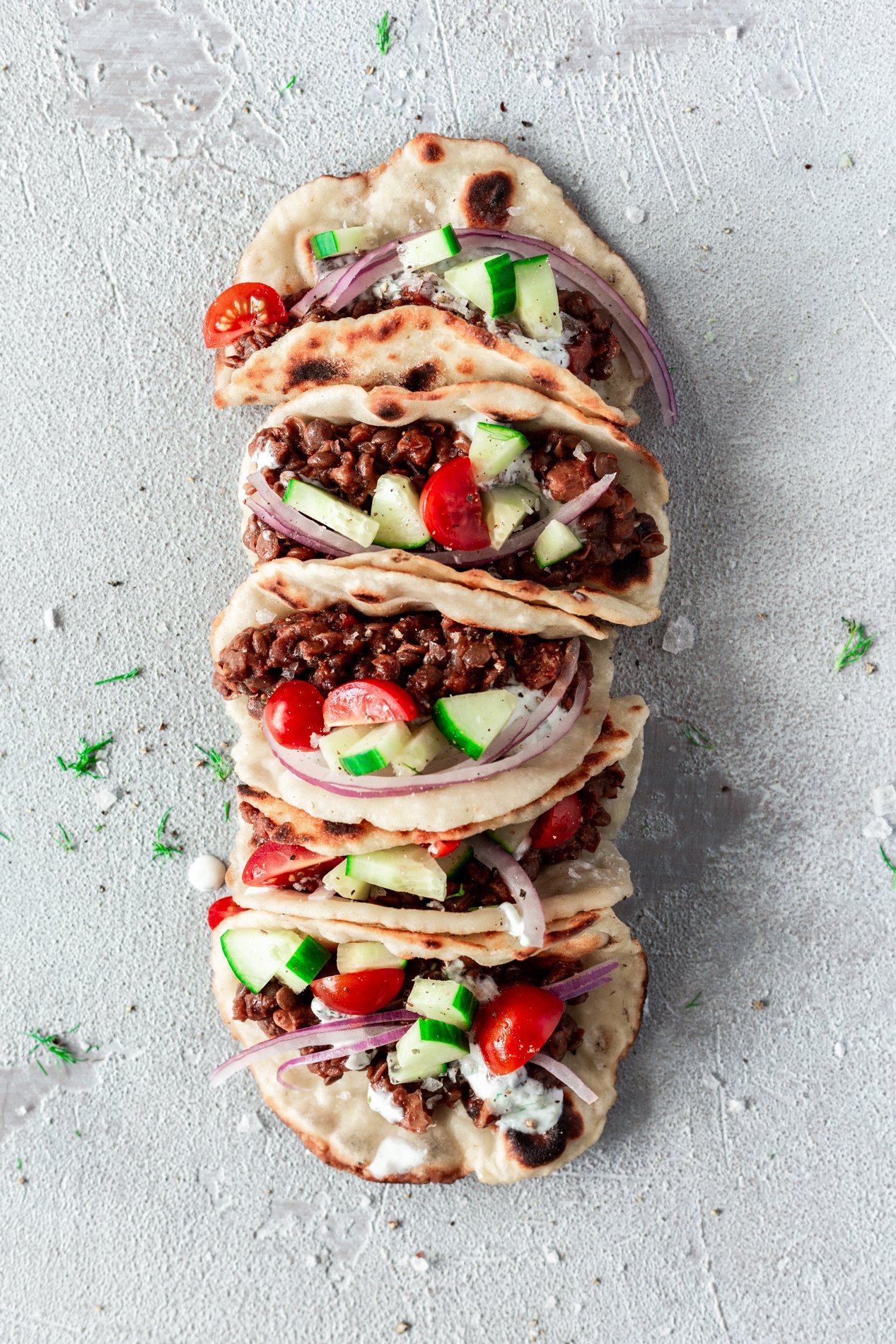 Let bold Mediterranean and Middle Eastern flavors take you on a culinary journey with this instant pot vegan gyro recipe! With the texture and mouthfeel of meat, this recipe will please even the pickiest non-vegan. Whipping up in just minutes, this decadent dinner is a wonderful recipe to try if you’re new to vegan cuisine, love a fresh take on a classic recipe, or just enjoy experimenting with food. Give this recipe a try today, and pick up The Vegan Instant Pot Cookbook to explore more wonderful vegan recipes! 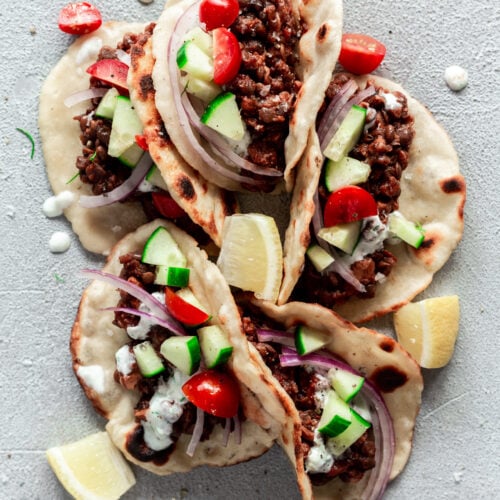