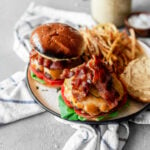 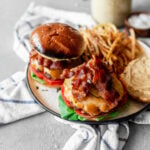 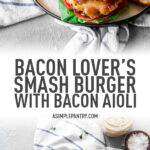 Get the griddle going to whip up this superb Bacon Lover’s Smash Burger Recipe on the Cuisinart Twin Oaks Pellet & Gas Grill! With a ton of succulent bacon and the easiest homemade bacon aioli, this burger beats even the best restaurant version, and you don’t need to get takeout when you can make it at home! You’ve mastered pulled pork, now master this burger and keep the fam happy all summer long. 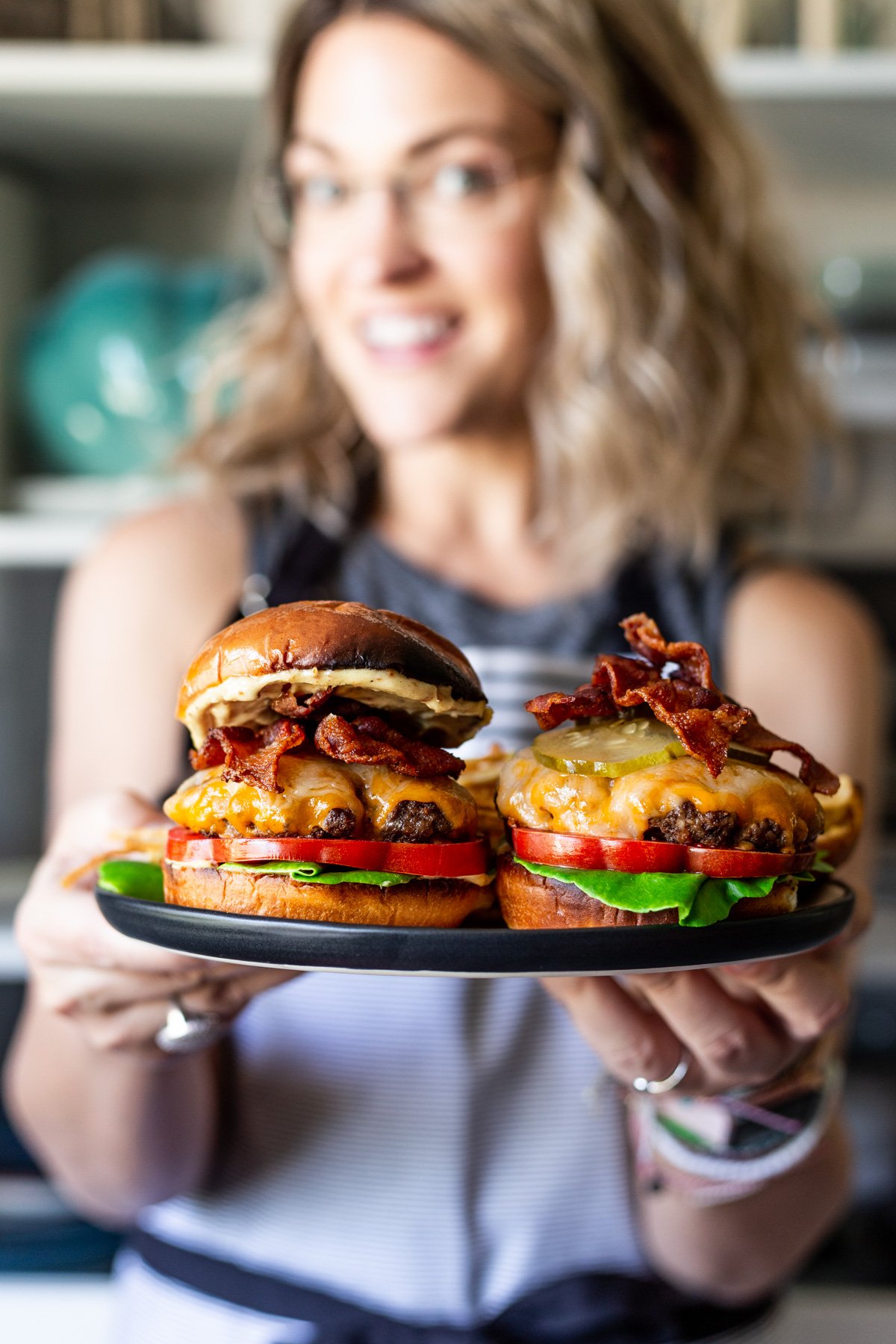 For The Love Of Bacon

You know me and my love of bacon. From maple bacon breakfast burgers to bacon jam, to bacon-wrapped hot dogs, I’ve got you covered in all things bacon.

Today we hit the next level of bacon goodness with a smash burger recipe that’s infused with bacon, topped with bacon, and slathered in a homemade bacon aioli that’ll have you dumping mayo for good.

This. This is the ULTIMATE Bacon Lover’s burger, and I know you are 100% here for it! 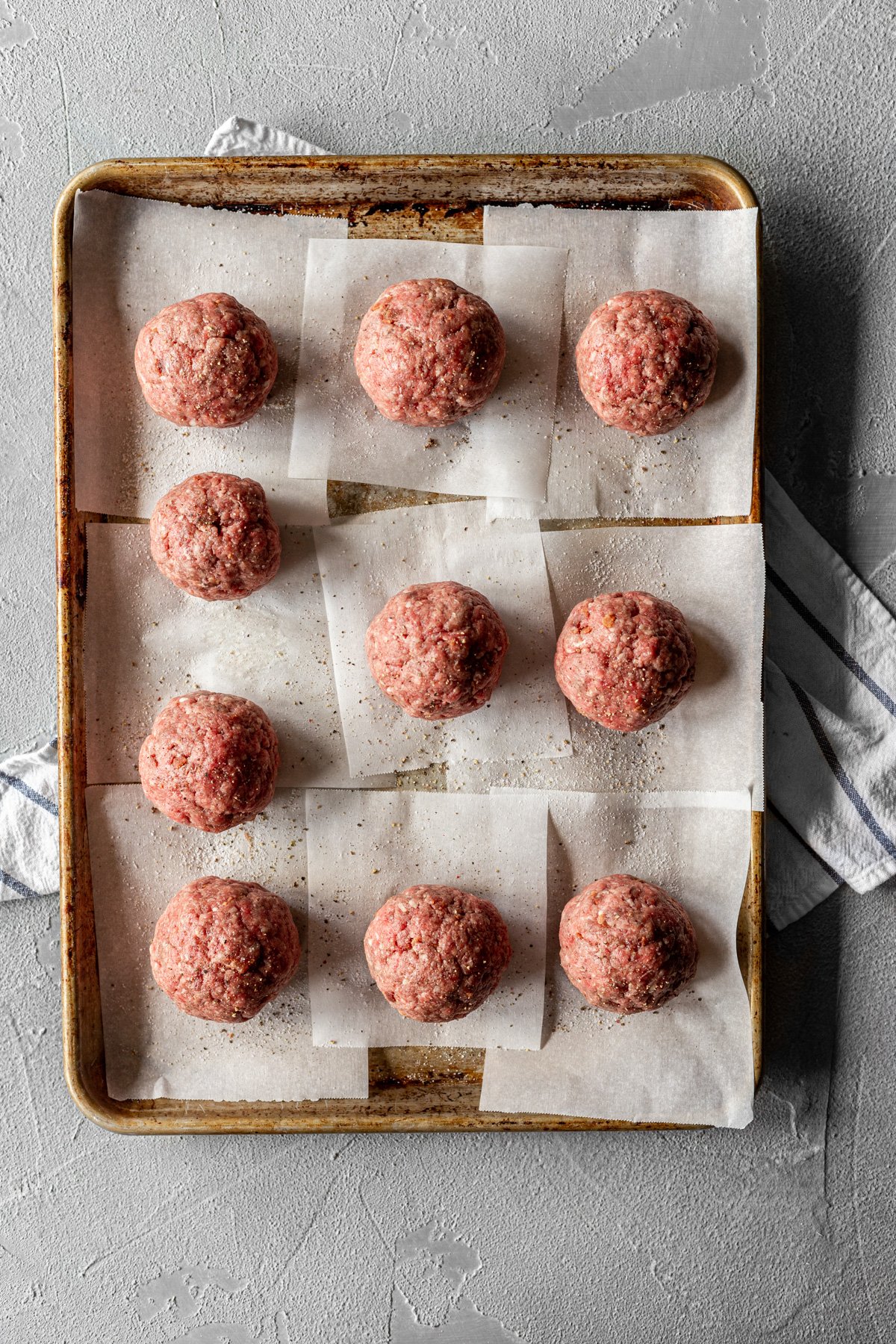 How To Prepare Bacon Smash Burgers

It’s honestly pretty simple. We’re breaking out the griddle on the gas side of the Twin Oaks Grill for this dish, and we start by cooking up some bacon, of course! 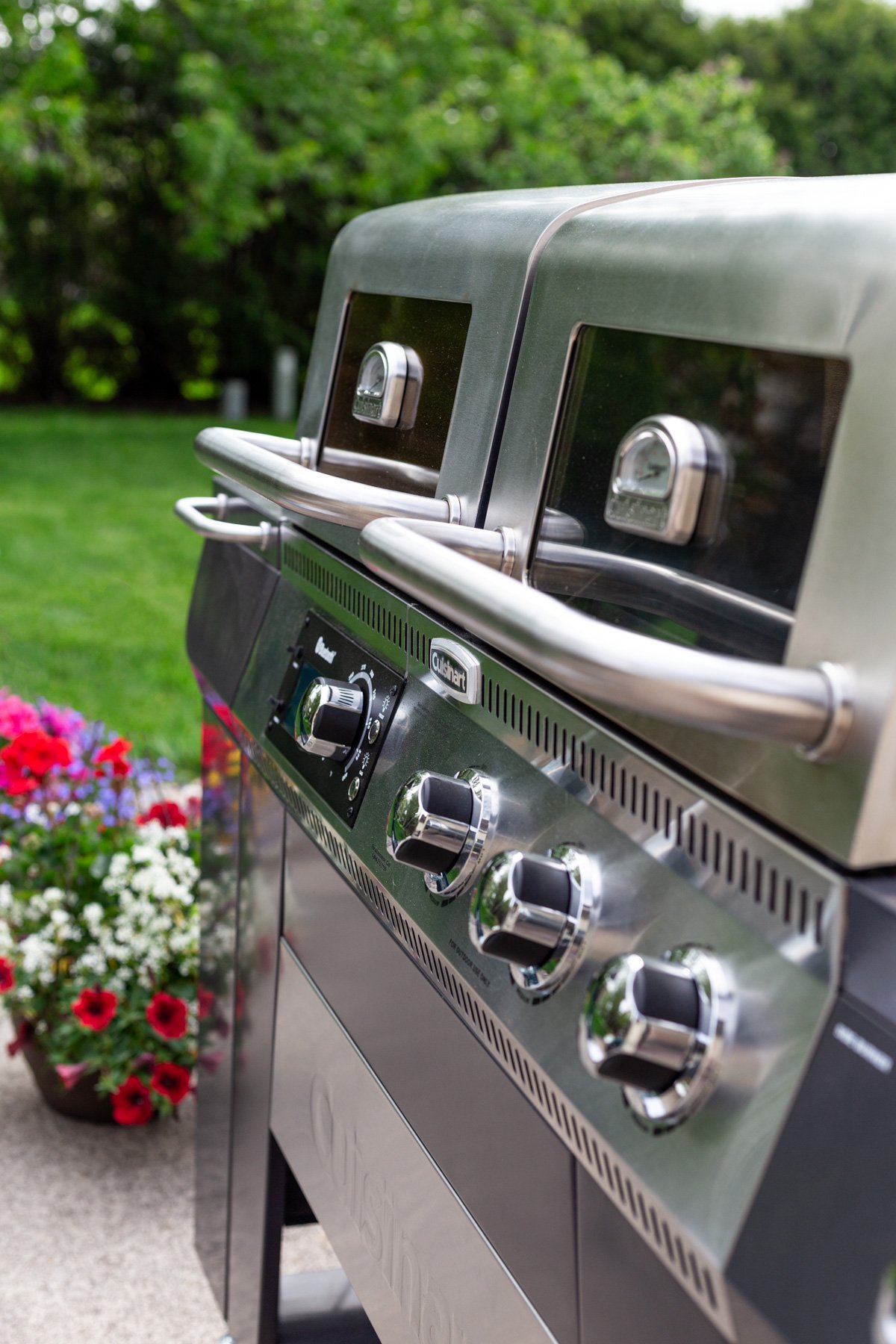 Chop up eight ounces of raw bacon and throw them on the hot griddle, cooking them down until they’re almost crispy, but not quite. Scoop them up and cook the remaining eight ounces of bacon to use on the burgers themselves.

Throw the chopped up bacon into a bowl with the ground beef, and add some grated yellow onion, then mix by hand and form into balls. Season with salt and pepper, that’s it! 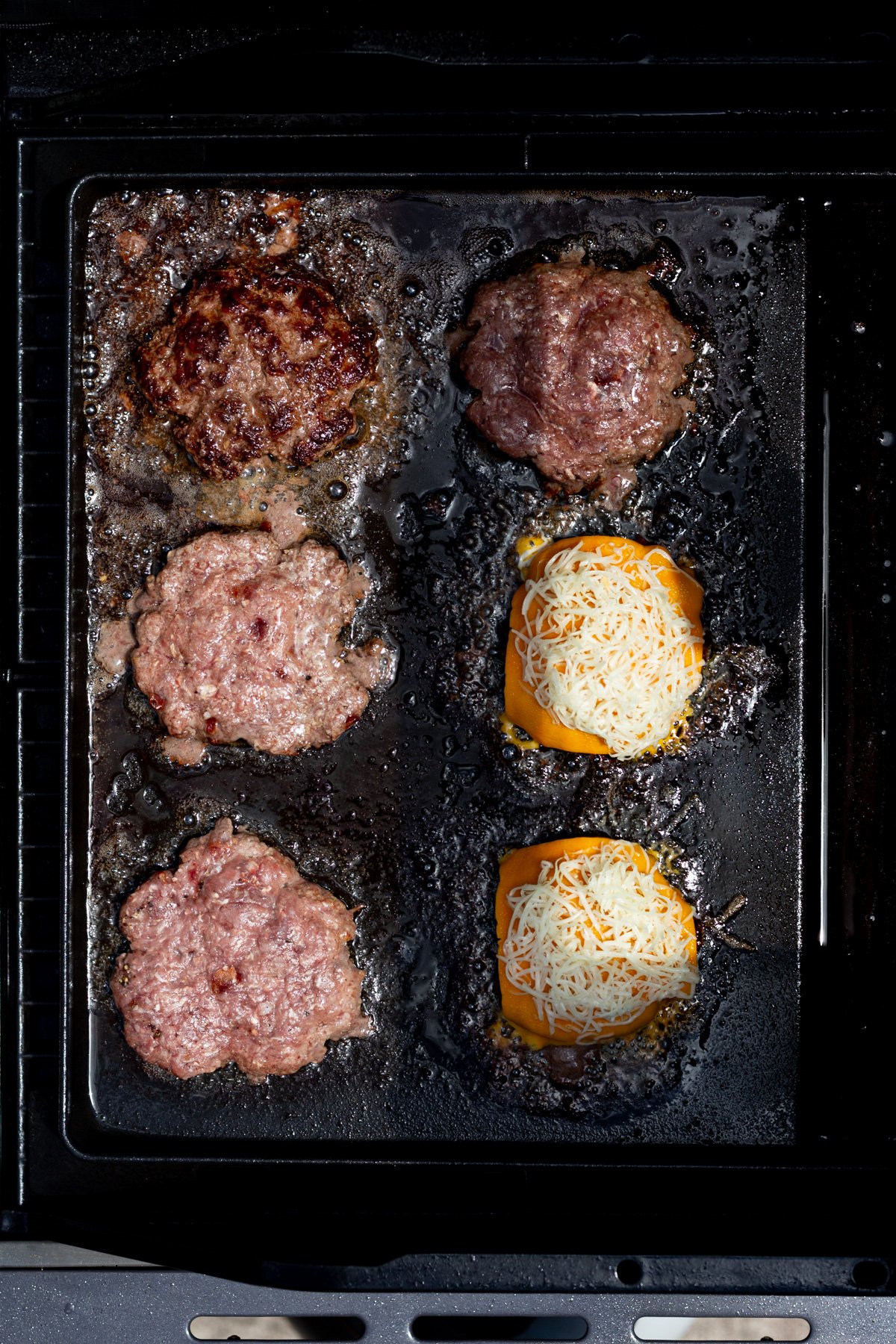 How To Smash a Smash Burger

You would think it’s a no-brainer, but nope. A standard spatula isn’t going to cut it. Trust me, I tried. Oops.

If you can, invest in a meat smasher. Seriously, worth it.

If you can’t, you need something big, heavy, and with a flat bottom. I used a giant glass jar of uncooked rice.

The purpose of smashing the burger is to quickly sear and caramelize the outside of the burger, giving it that delicious crispness, while still maintaining juicy moisture inside. Once you’ve smashed it the first time, you don’t want to do it again.

So, smash that beef good and hard on the first try.

These burgers take only minutes to cook since you’re smashing them thin, which makes them great if you’re in a hurry, or serving a large family. Minimal waiting! With the large cooking area on the griddle of the Twin Oaks Grill, you can throw down multiple burgers at a time, which is fabulous. 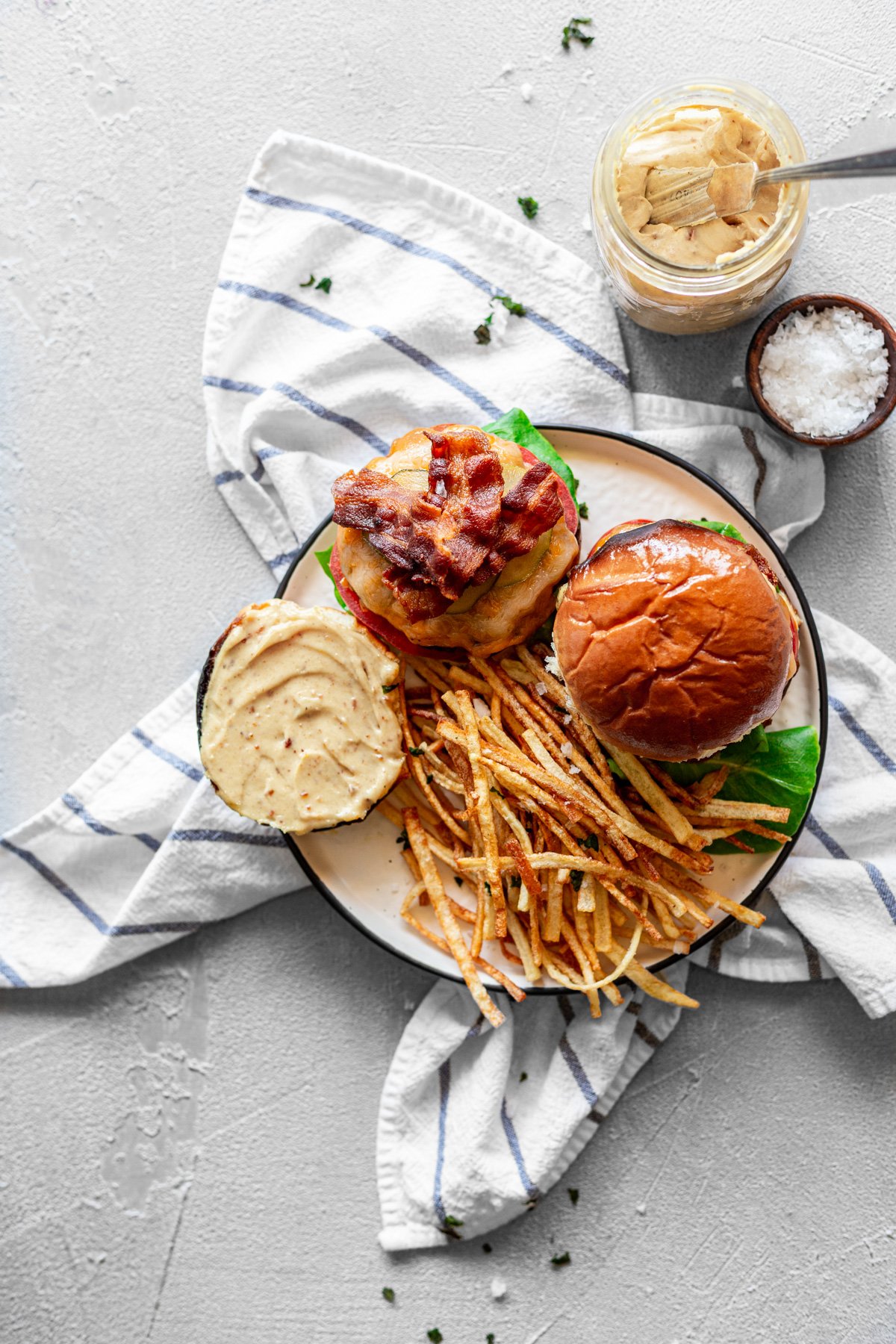 Let’s not forget that bacon aioli! You can make this in advance because you need some of the grease and you need it to be room temperature.

Just whiz up some egg yolks with garlic, then drizzle in oil and bacon grease until an emulsion forms (thick and yellow, almost like mustard), then add in the dijon, honey, red wine vinegar, and bacon bits and BAM! Delicious.

Whip up this bacon burger recipe all summer long, and then maybe make them in the fall and winter and spring too! The Twin Oaks Pellet & Gas Grill will keep you outdoors all year, no problem. 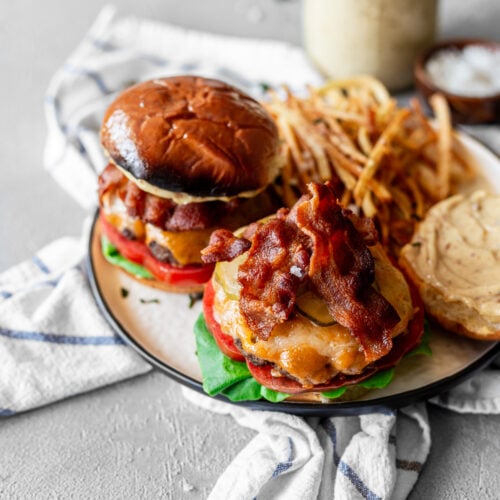 For The Bacon Aioli

For the Bacon Smash Burgers

For the Bacon Aioli

For the Bacon Smash Burgers

*I recommend grating the onion into cheesecloth or paper towels and squeezing out some of the excess liquid before adding to the meat. It's not completely necessary, but it results in less juice being leeched from the meat while cooking.
**To make smashing easier, you can place small squares of parchment on each meatball before pressing.