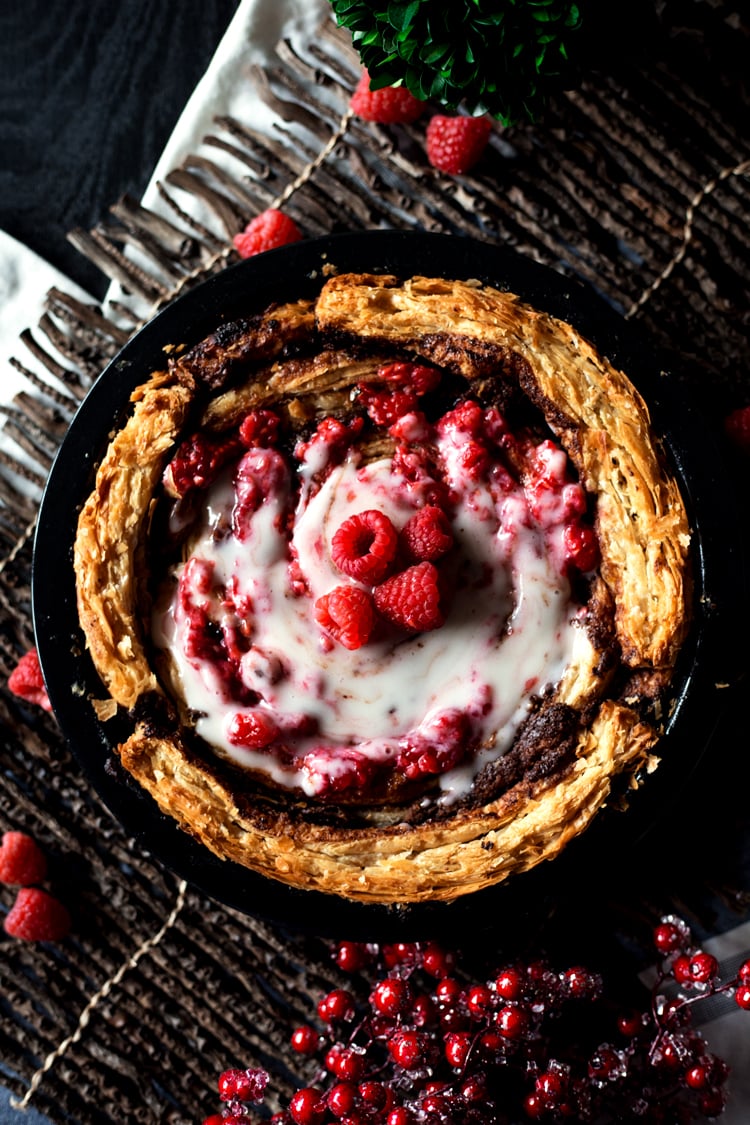 You all know I have a love for a good cinnamon roll cake. Between my spiced apple and peanut butter varieties, I thought I was good to go. 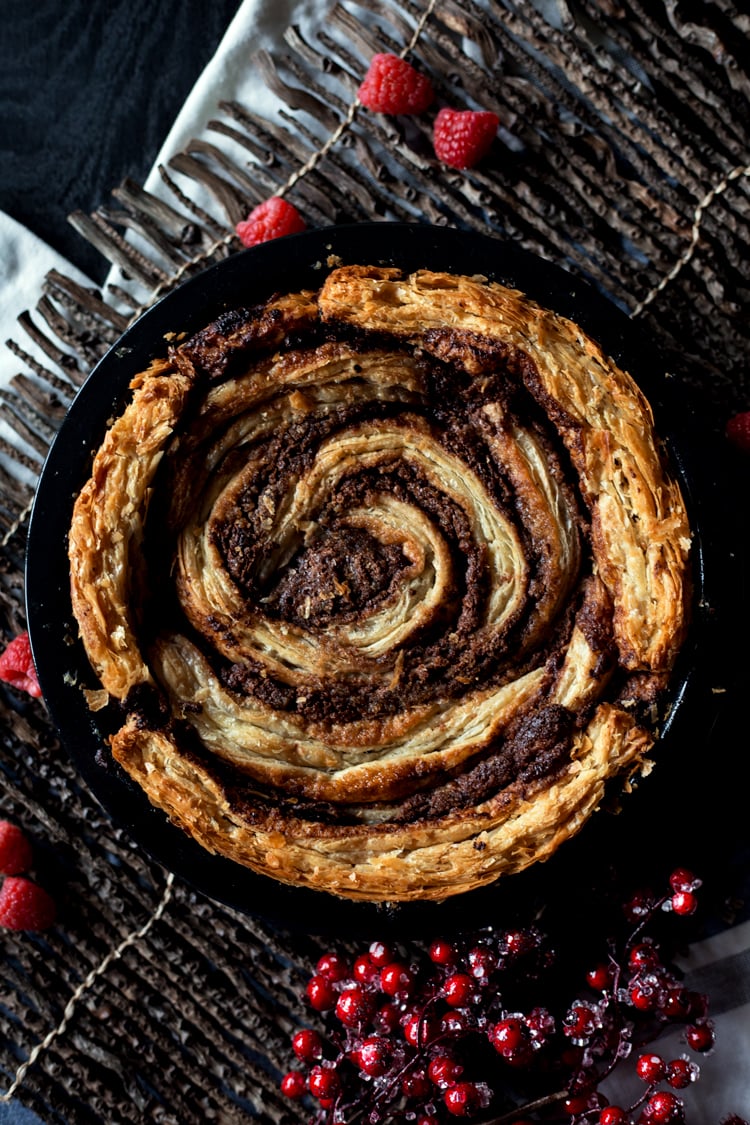 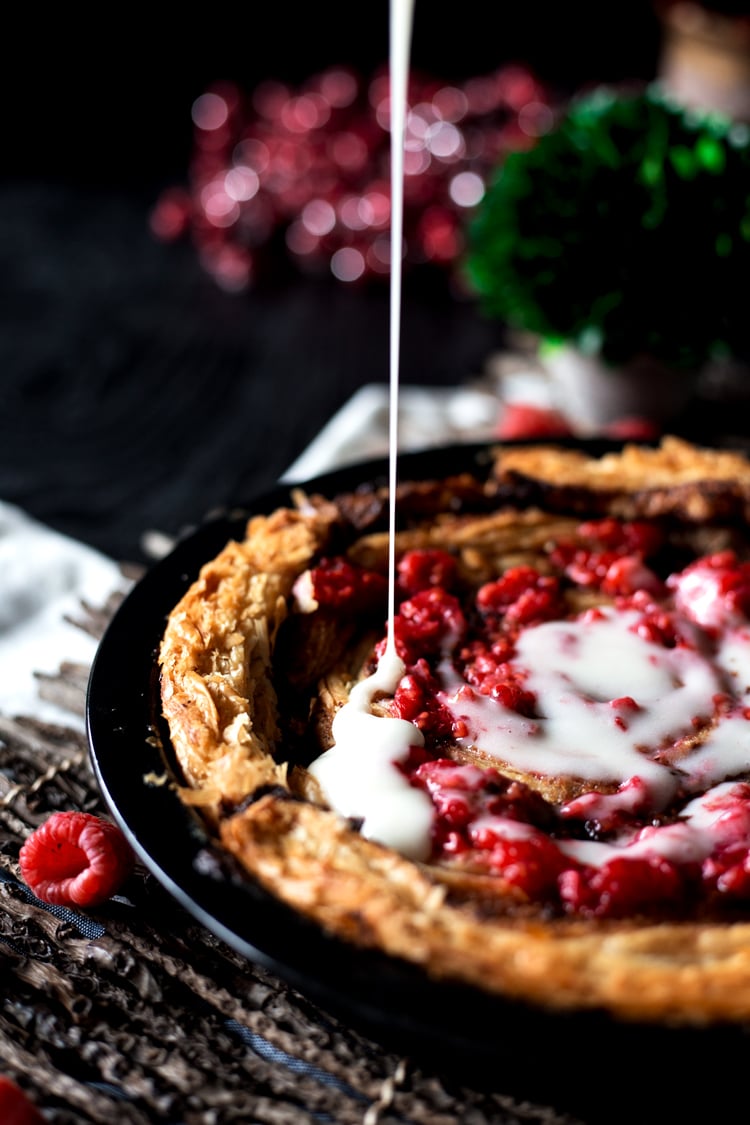 This is probably the easiest cinnamon roll cake you will ever make, and your taste buds will thank you for it.

Stuffed with hazelnut spread, I skipped a traditional dough and went with Pepperidge Farm® Puff Pastry, which provided a light and fluffy base for this treat. 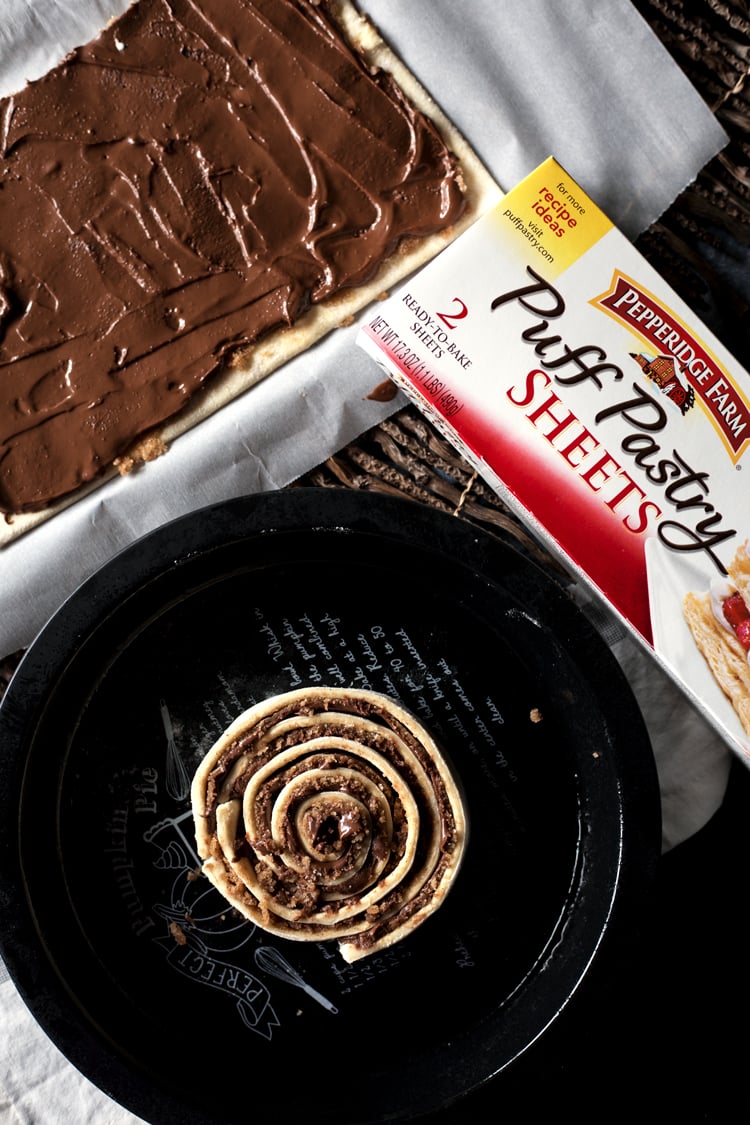 Like my other cinnamon roll cakes, I laid the dough out flat and coated it with the necessary deliciousness.

A word of caution: spread the hazelnut spread first, then add the cinnamon roll topping. I promise, it is twenty million times easier that way. By doing the topping first (as shown above), it didn’t stick to the dough and made cutting and rolling it a total PITA.

I used a pizza cutter to slice the dough into strips, rolling the very first one into a mini cinnamon roll. After that, I added one strip at a time, coiling it around the first roll. It goes rather quickly! 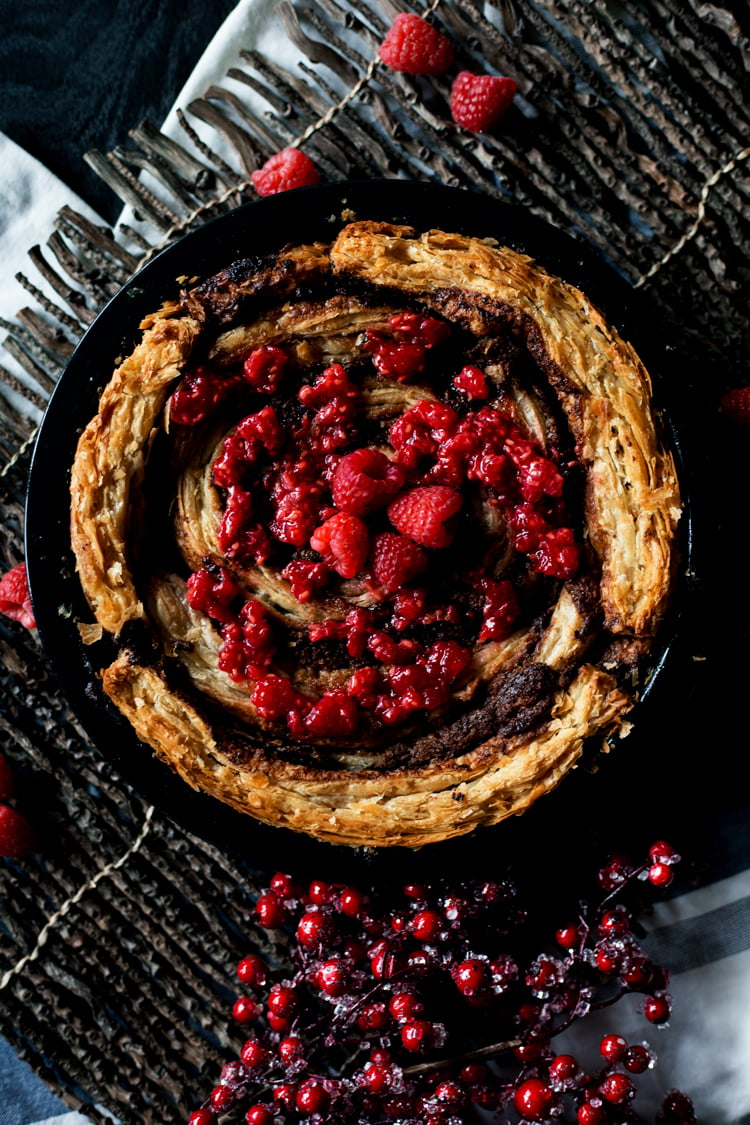 Just throw it in the oven and get ready to salivate over the smell of amazingness. Oh how much do I love baking! 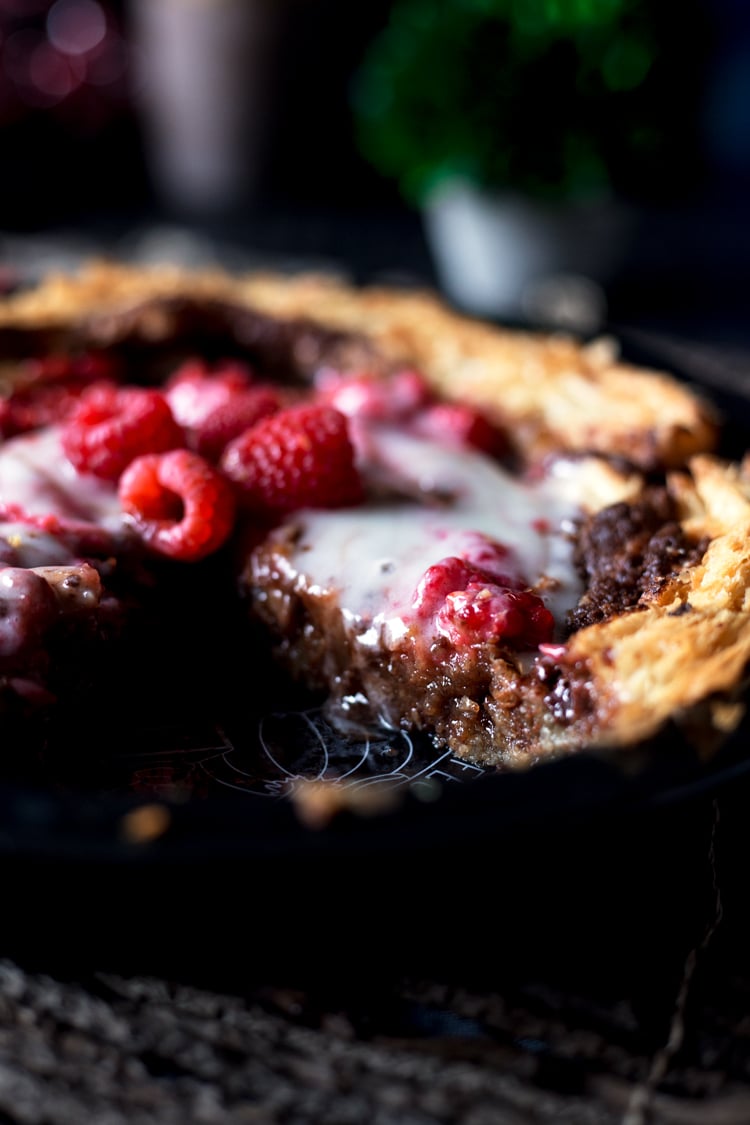 You can get fancy and top this bad boy with fresh raspberries like I did, or just throw on a heaping pile of that frosting that makes all cinnamon rolls fanfreakingtastic.

I may or may not have made extra frosting just cause.

My lips are sealed.

But if you are looking for something perfect to make on the fly, or for a good snow day (zomg it is going to snow here this week!), then this cinnamon roll cake is calling your name! 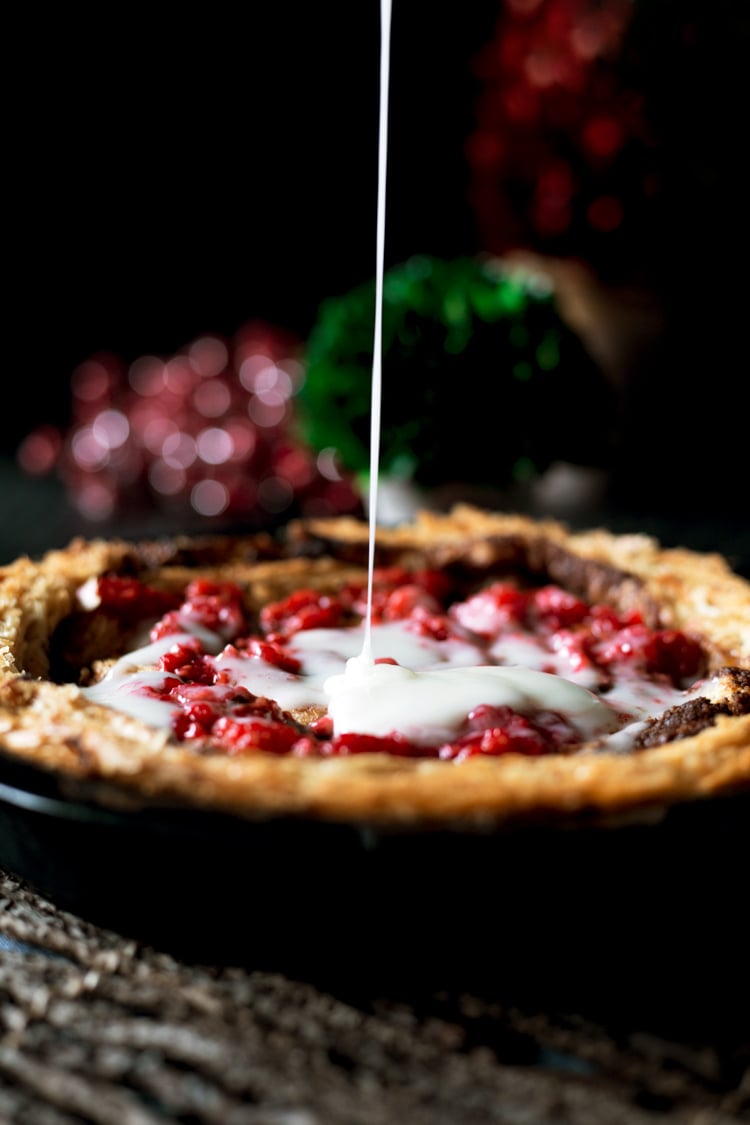 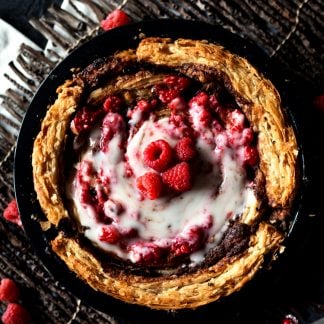 *Heat hazelnut spread briefly in the microwave before spreading over Puff Pastry Sheets to make it easier to spread. Just 15 seconds should do!
MADE THIS RECIPE?Click here to leave a comment + star rating! ★★★★★