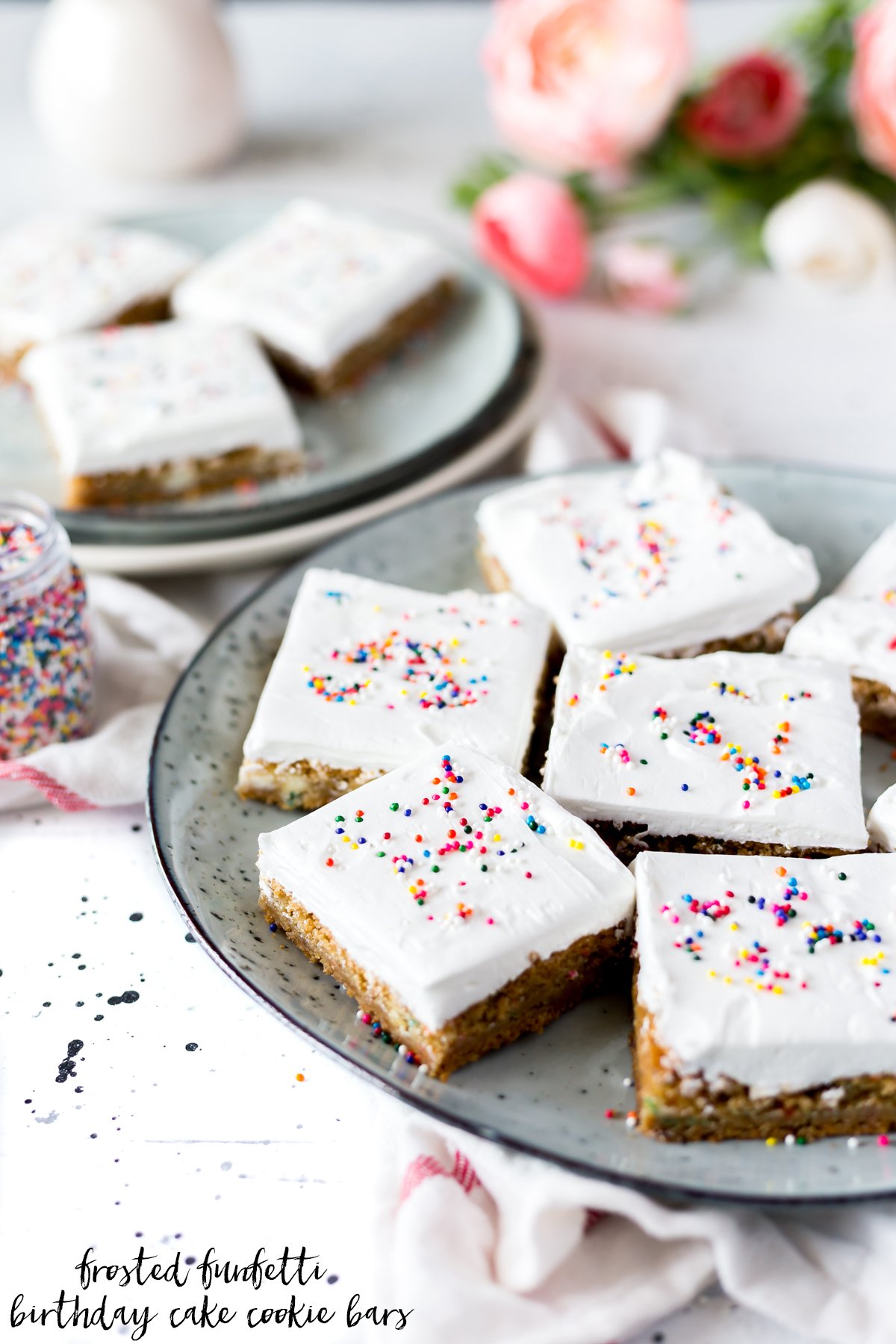 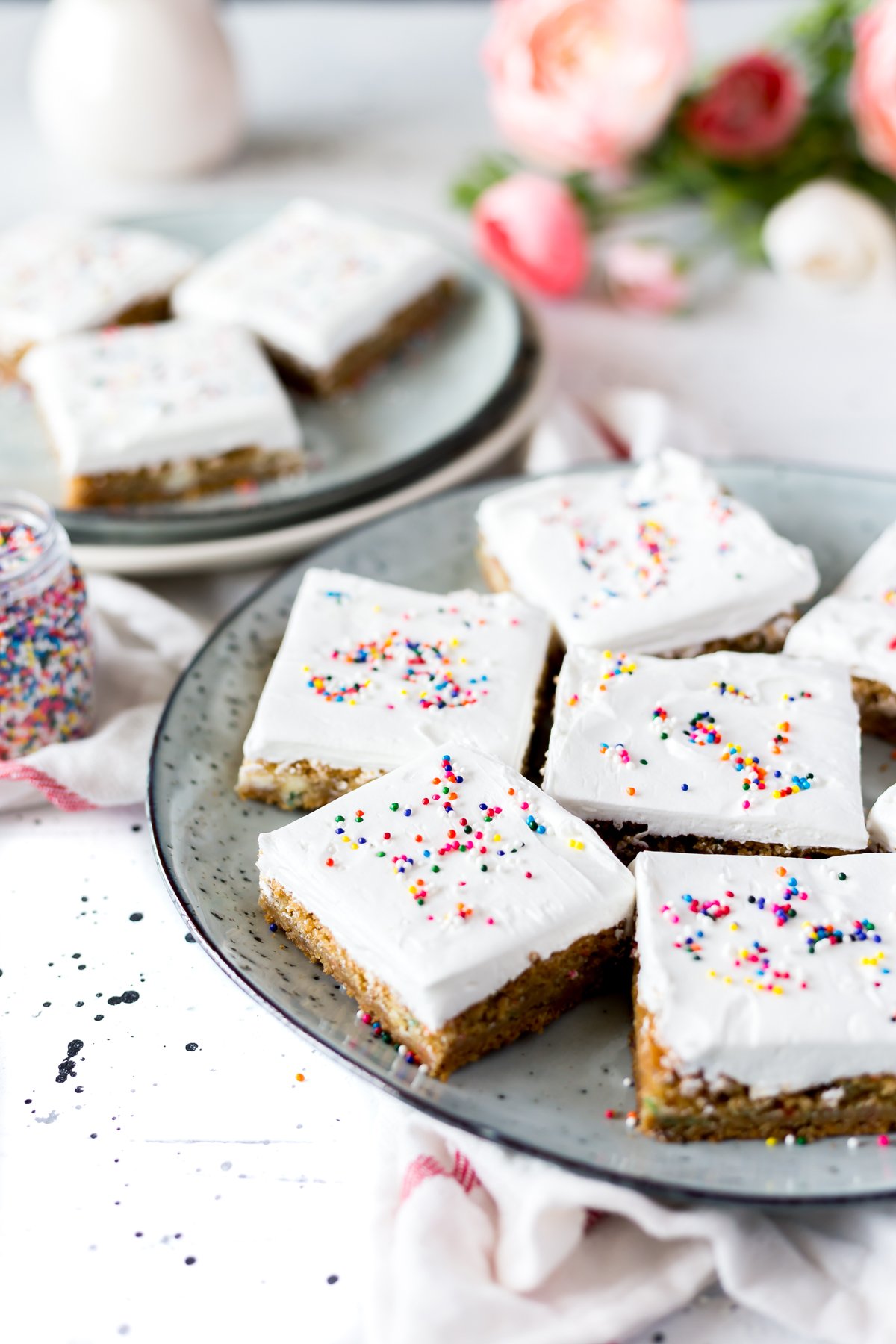 Easy recipes for dessert are my lifeblood. Seriously. And these frosted funfetti birthday cake cookie bars are a true labor of love.

Because I screwed them up twice before getting them right. Bah ha ha. 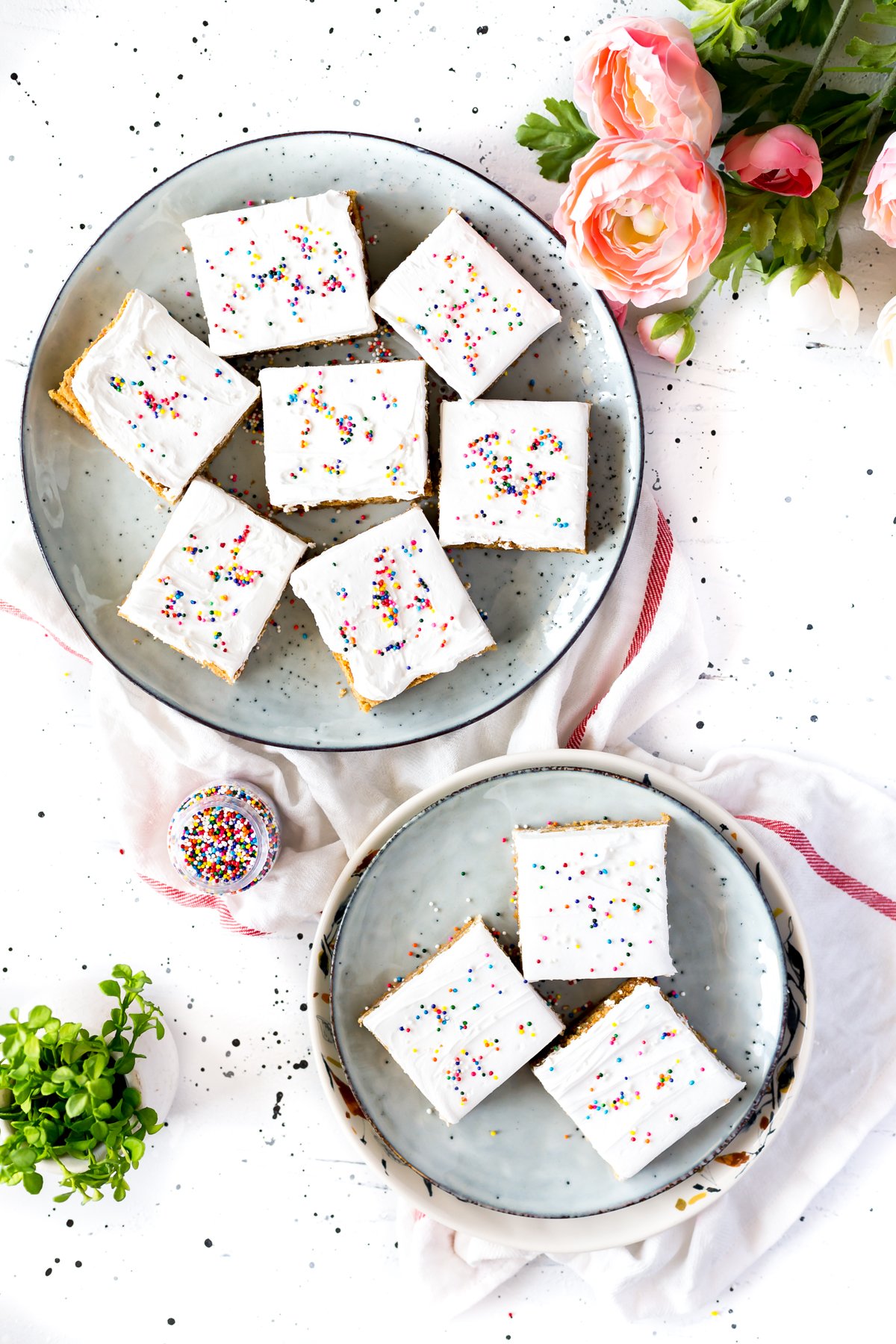 But in all seriousness, I have eaten so many cookie bars in the past two days I could die. They are so delicious, though, even in their failed form.

The first batch came out ridiculously overcooked. My oven has a mind of its own, and since it’s about as old as I am…yeah. Sad face.

The second batch came out slightly overcooked, as my oven refuses to sit at any temperature I actually want it to be, and it also fell flat because there was too much moisture. 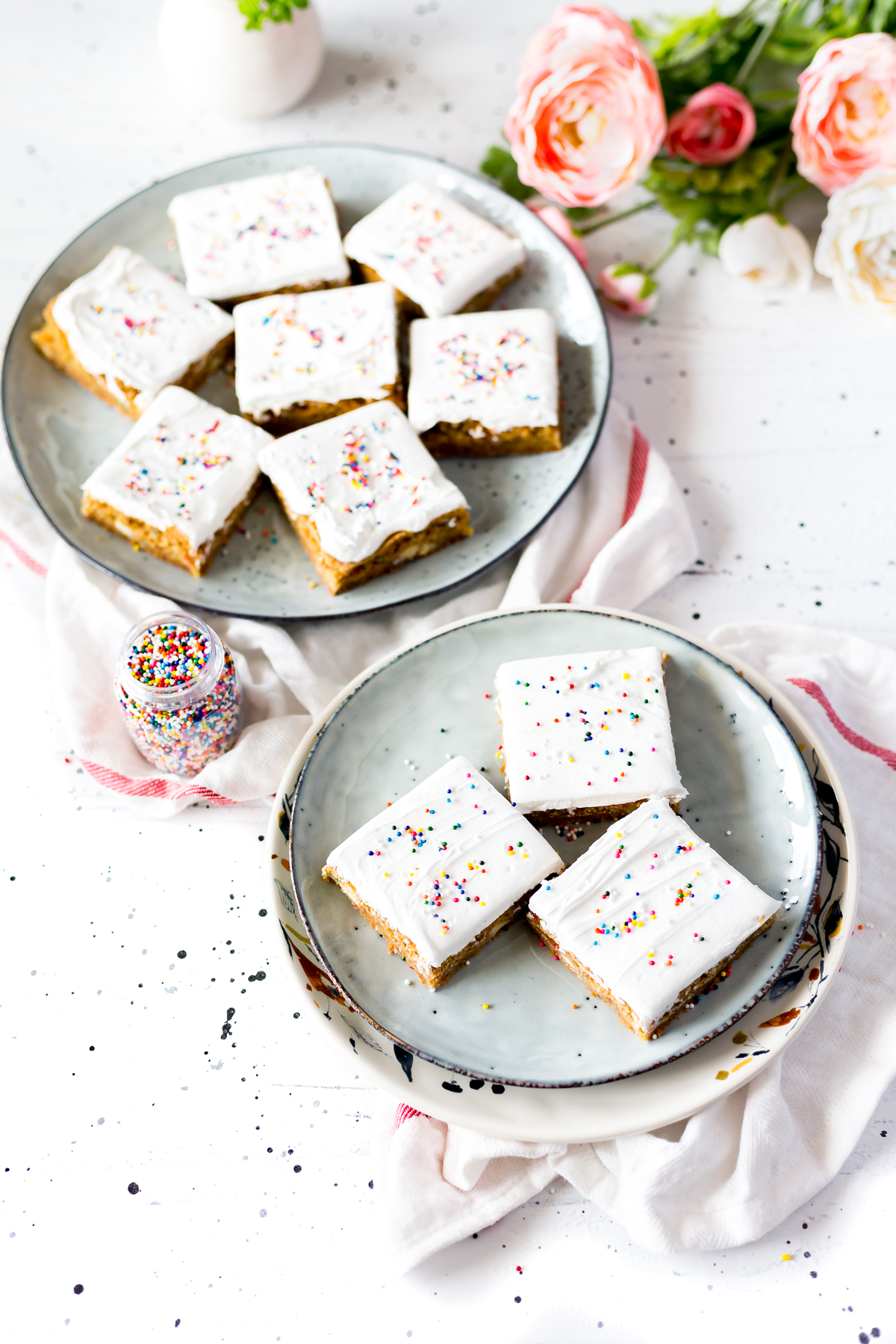 After additional adjustments, I am happy to say that this is now one of my bestest easy recipes for dessert. I sent a photo off to my husband via Facebook and he called me literally ten seconds after seeing it, telling me I needed to bring them to his clinic ASAP before his coworkers killed him.

I couldn’t oblige, though, because I have to go pick up Delaney from her after-school program. It’s a sad day in Rudy’s life, fo realz. 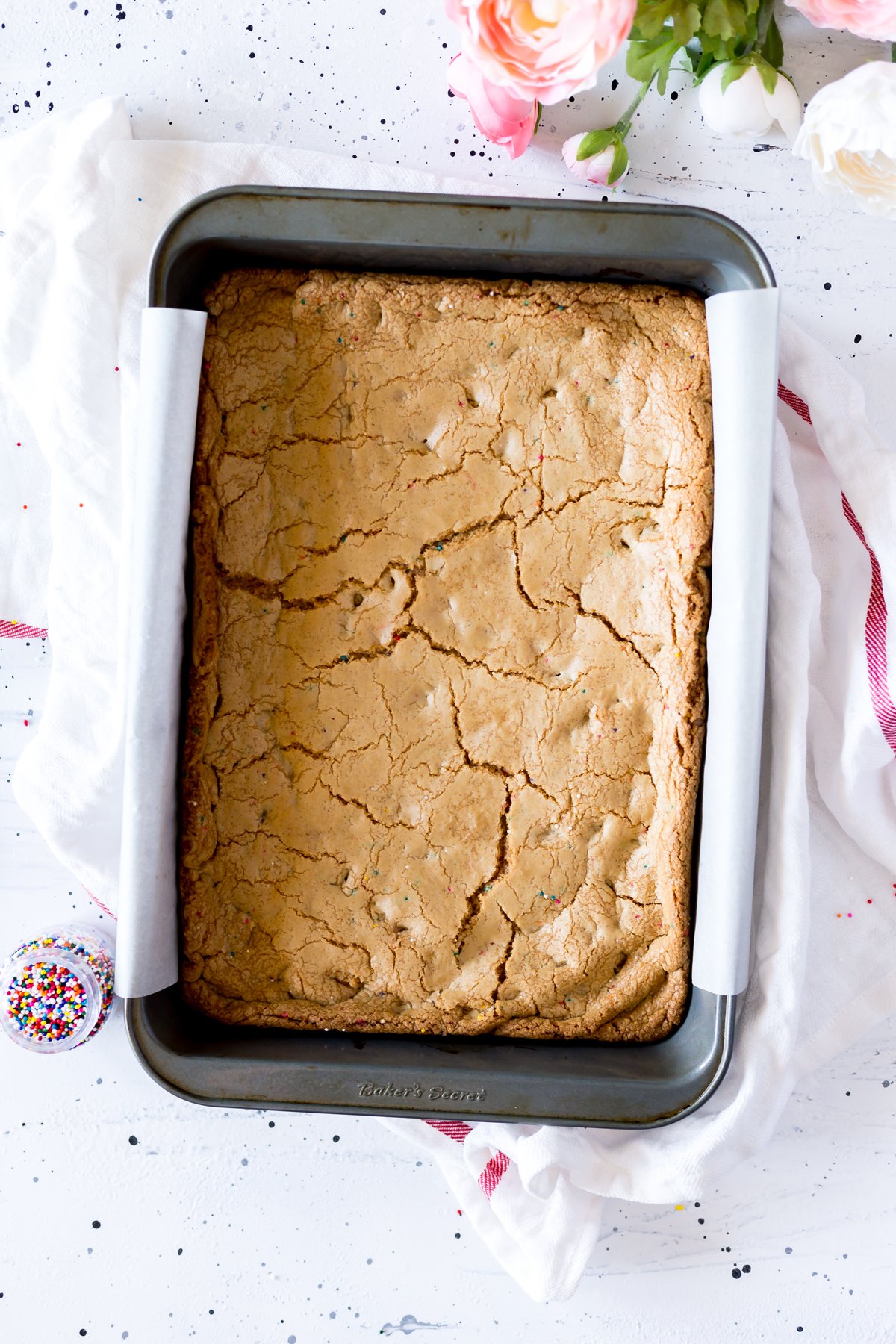 I baked this bad boy in my trusty 13×9 inch pan, and instead of using a funfetti cake mix, I mixed in my own sprinkles, which I am definitely a sucker for the little round nonpareils. Remember my fairy bread? Yeah, same stuff. Love it.

I also added white chocolate chips. I mean, how could I not? It just doesn’t seem like a cookie bar without some kind of chocolate chip.

And of course, I frosted these delicious noms, again, because how could I not? You can either grab your favorite container of frosting from the store, or use my buttercream recipe below. Either way, delicious. 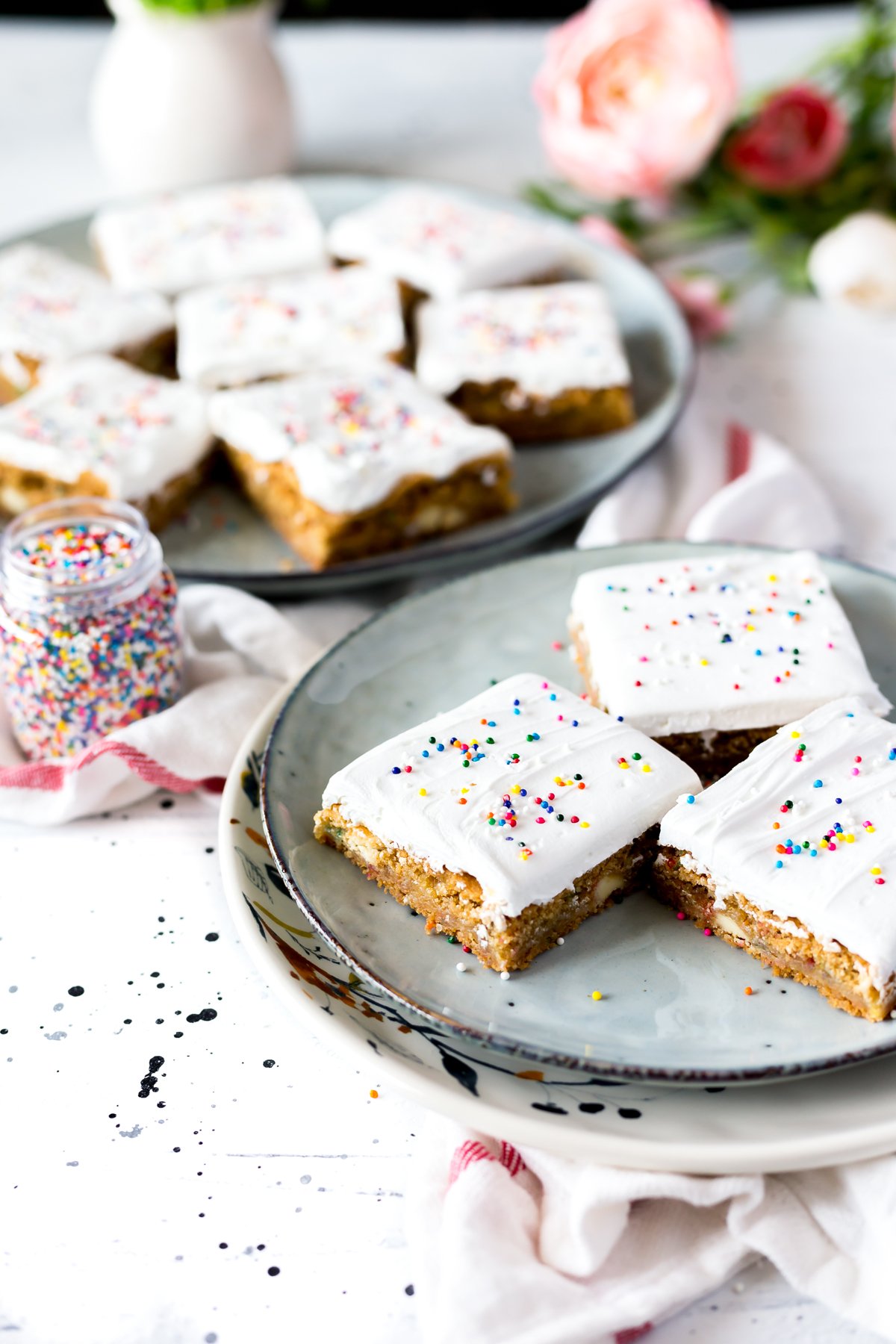 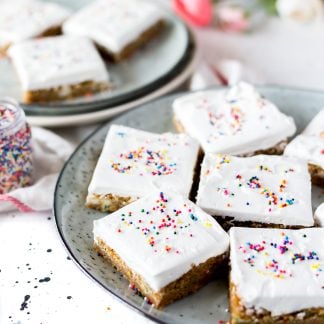 For the Buttercream Frosting

For the Buttercream Frosting

*Because I hate high lips around the edge of the pan, I usually mound the dough higher in the middle and leave a thin edge around the pan. That way, as it bakes and spreads, it evens out better in the pan.
MADE THIS RECIPE?Click here to leave a comment + star rating! ★★★★★