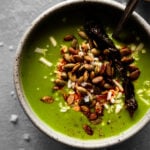 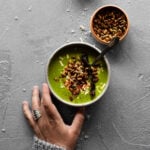 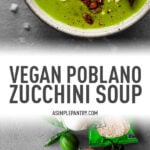 Did you know you could make a delicious soup in just 30 minutes, and have it be both gluten-free and vegan?! This spectacular poblano zucchini soup recipe features simple ingredients, topped with crunchy pepitas coated in a zesty chili-lime mixture, and will rock soup season with its vibrant color and bold flavors. Follow the tips below to cut down on prep-time, simple swaps for ingredients, and how to spice this soup up even more! 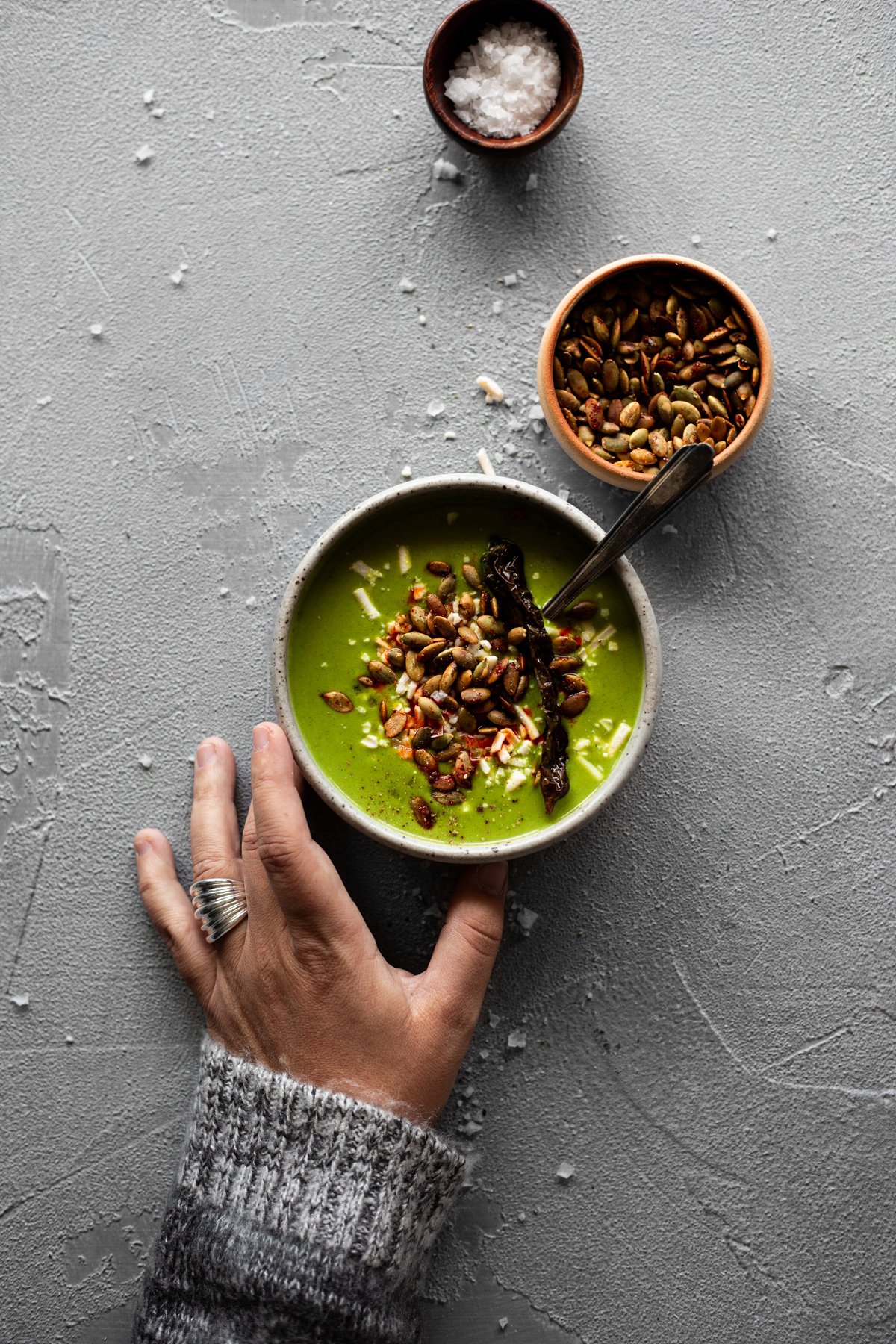 Why Make This Poblano Soup?

Oh, let me count the ways! 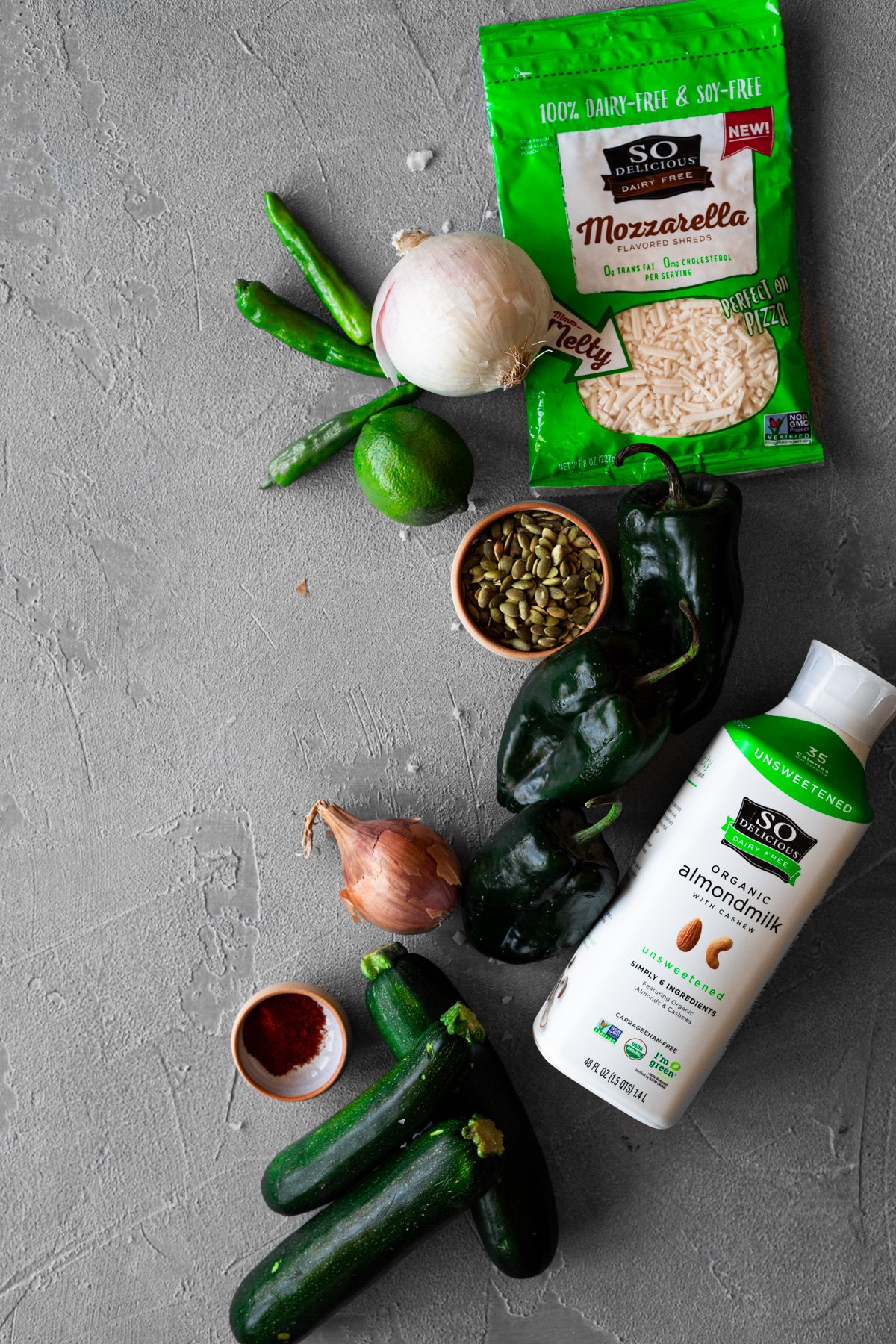 What’s In This Zucchini Soup Recipe?

For the soup itself we’re looking at:

And some salt for seasoning.

I based this recipe off the one I tried in Denver back in April, which actually used the So Delicious Coconut Milk, but since I always have their Organic Unsweetened Almondmilk with Cashew on-hand, I decided to try this variation instead. I love using their almondmilk with cashew because the flavor is so mild, but with under 50 calories per serving, this recipe is light while still feeling thick, creamy, and decadent. Perfect for soup season, indeed! 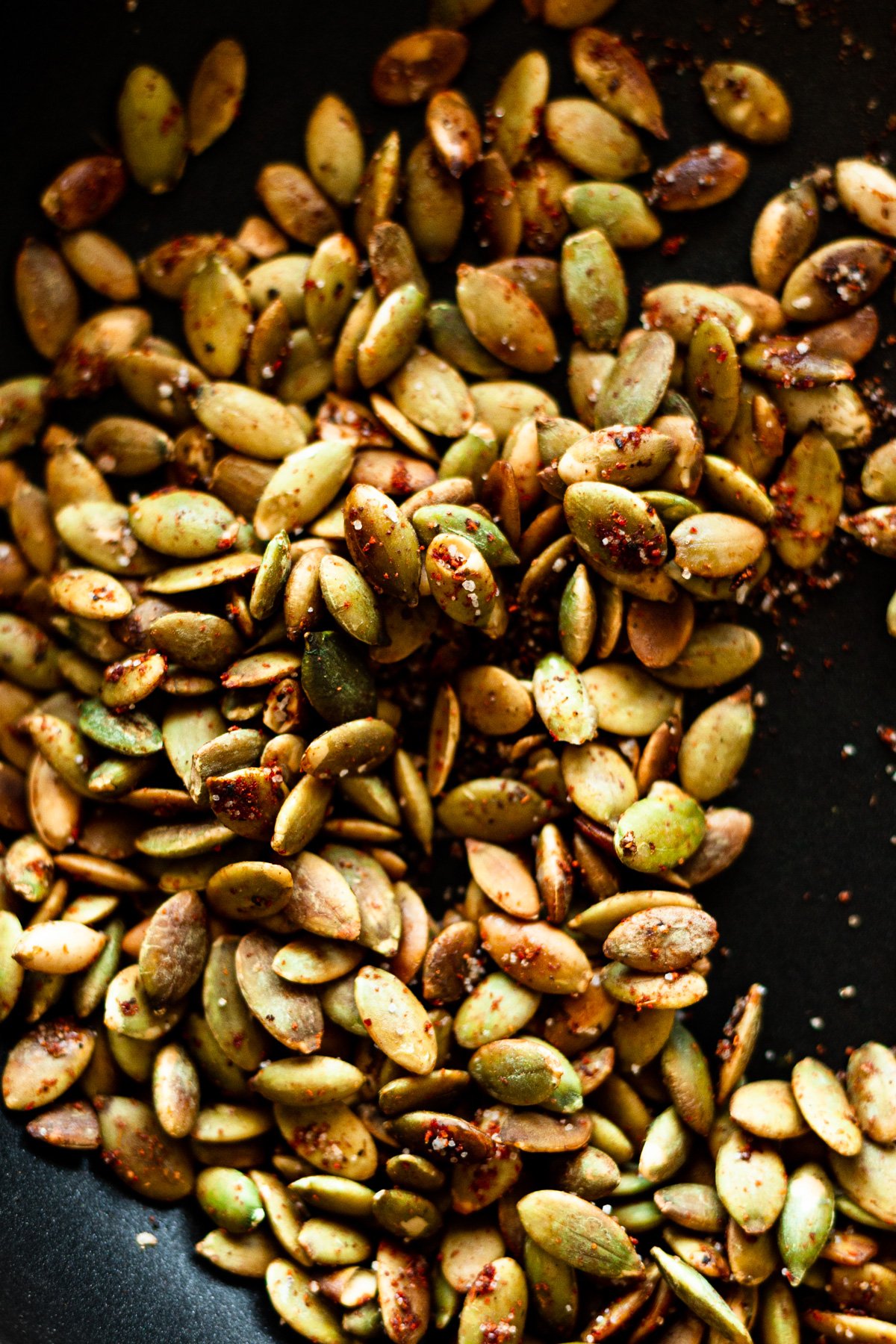 What Toppings Should I Use?

My all-time fave are these chili-lime pepitas. If you are unfamiliar with pepitas, they are simply pumpkin seeds! I lightly toast them in a skillet, then squeeze fresh lime juice over them and toss them with chili powder and a sprinkle of salt.

The pepitas add a hearty crunch to this creamy zucchini soup, and with the chili-lime coating, they add a slightly spicy zip!

You can also add flash-fried shishito peppers, which are becoming more readily available in stores, for a flavorful finish. Sometimes they can add a bit of spiciness too, but usually, they are rather mild.

I also enjoy adding a tiny drizzle of chili oil for some buildable heat. But be wary, it can build very quickly! 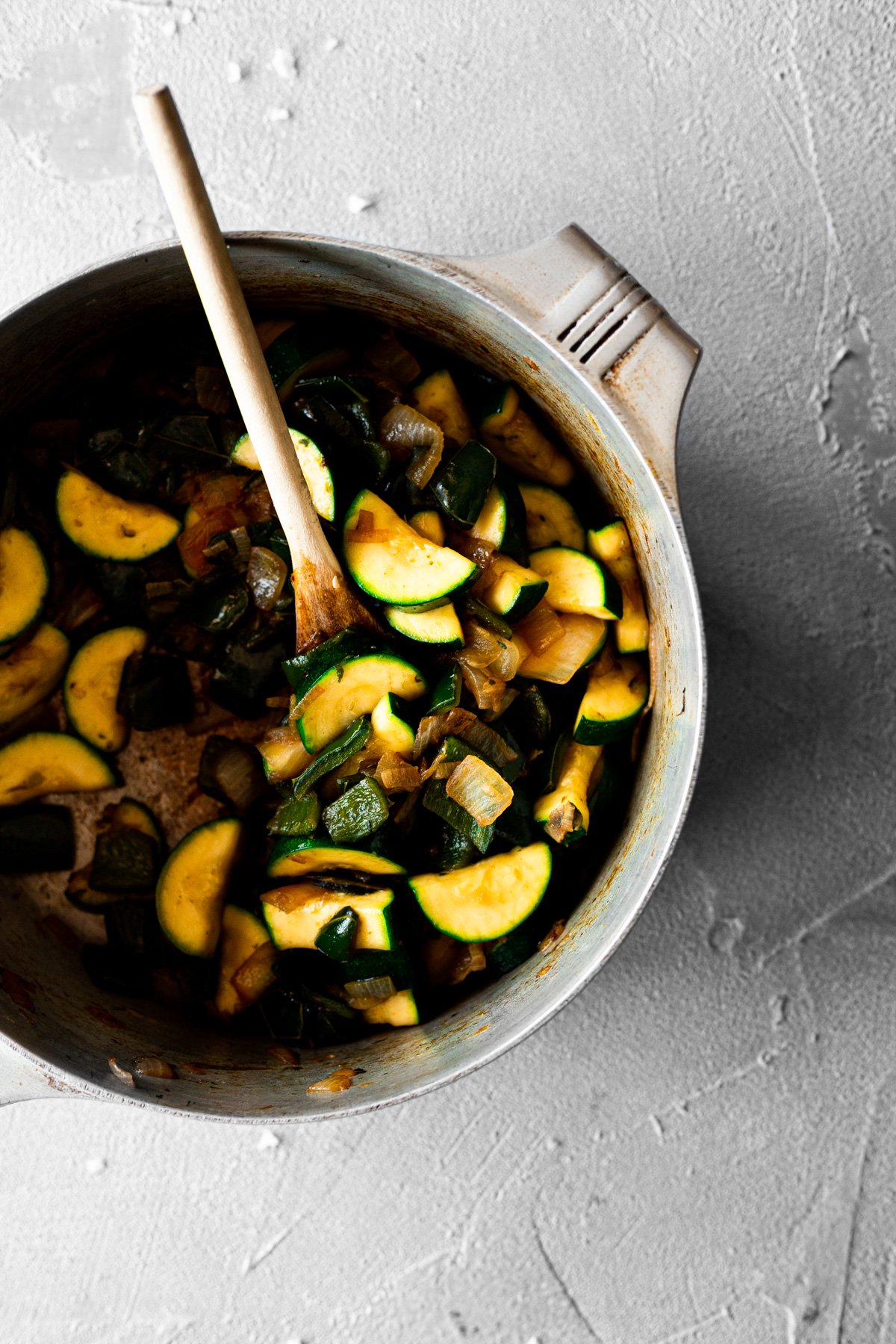 How Do I Make This Poblano Zucchini Soup Recipe?

We start by heating up some olive oil and cooking down the onion, shallot, and poblano chile until browned and softened, almost caramelized, then add in the zucchini and cook for a few more minutes until softened.

To cut down on prep, chop up the veggies into thicker pieces! It’s all going into the blender at the end, anyway. 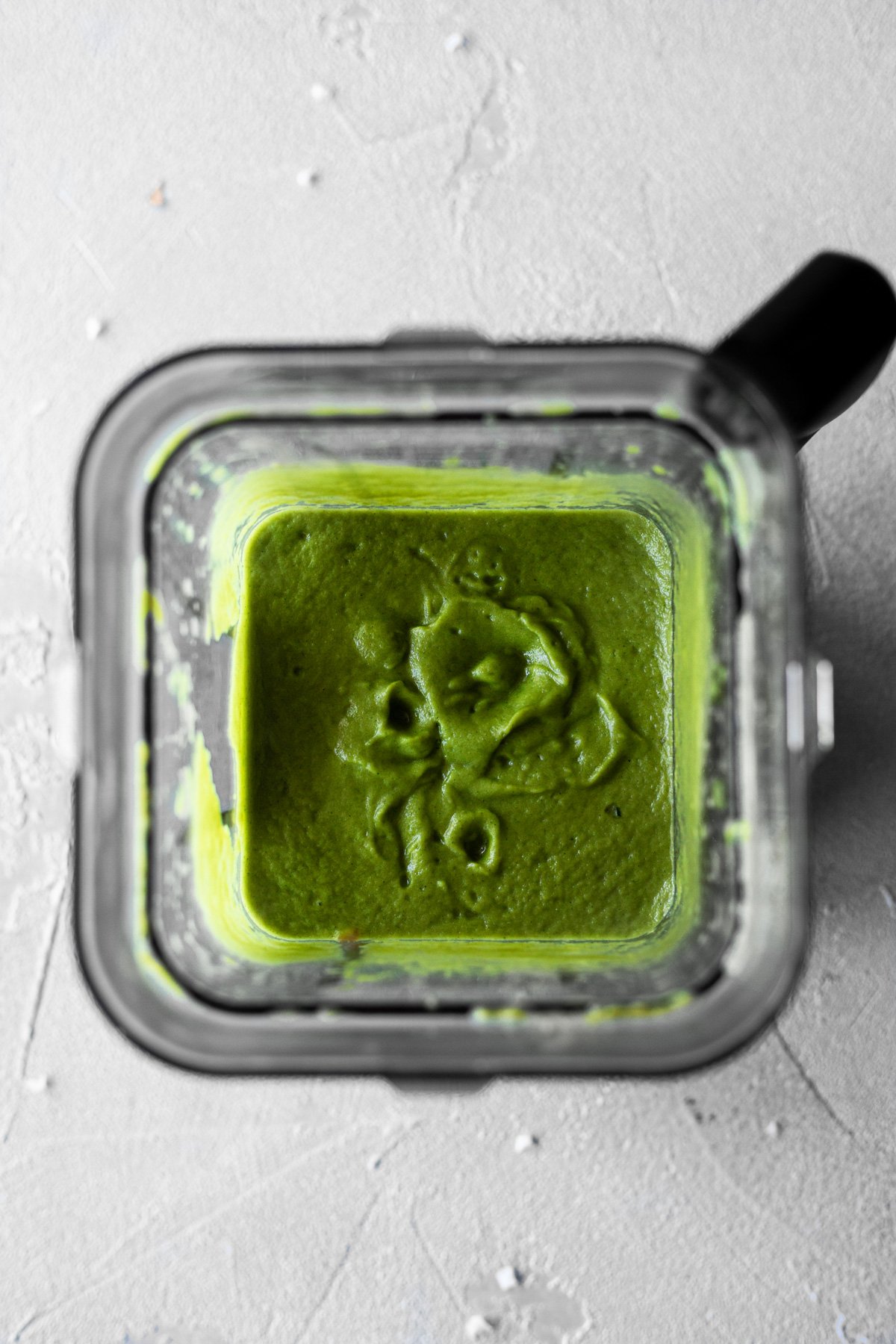 Blend the cooked veggies until smooth and then add the mixture back to the pot and pour in the So Delicious Almondmilk with Cashew.

You should watch my Instagram Stories of this, it’s ridiculously satisfying watching the almondmilk mix with the vegetable puree. Sooooo satisfying. 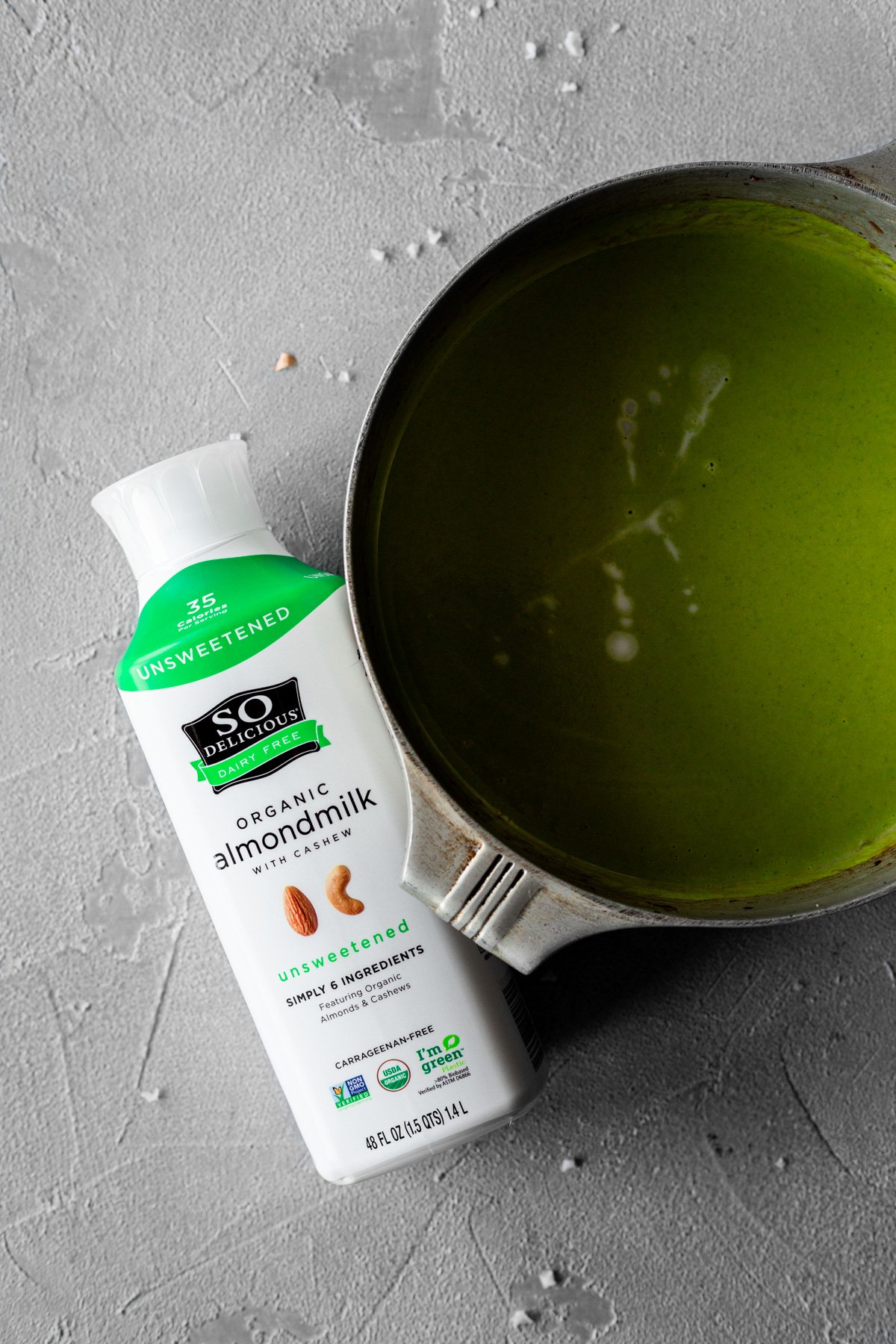 At this point you just heat it on low until nice and warm and adjust the seasoning of the salt if needed.

This recipe is so simple! So delicious!

Get it? So Delicious?!

I know, I know, I am terribly lame, but you all know how I can’t resist bad puns. 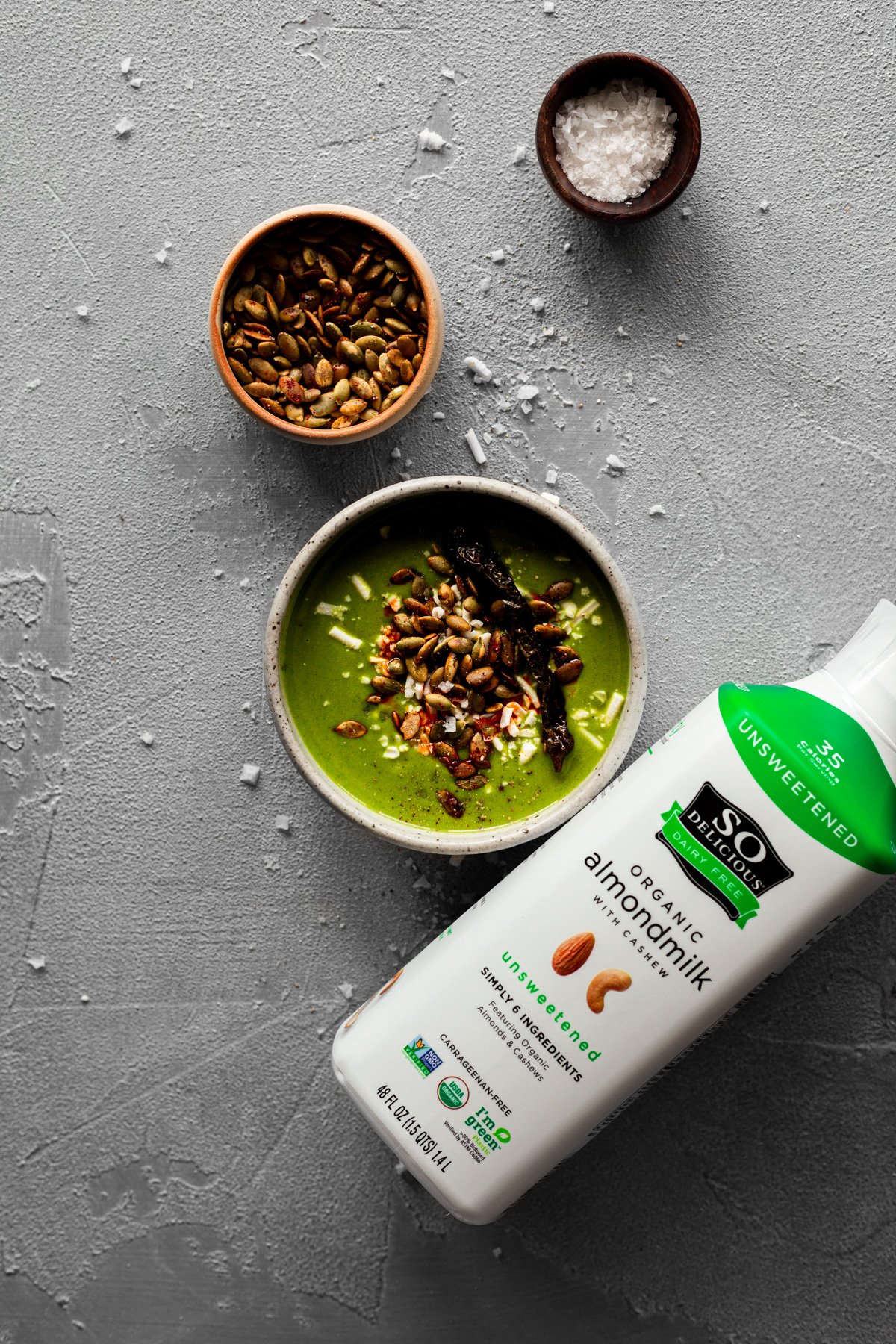 How To Serve This Poblano Soup?

I love to layer the toppings.

First, I start with a tiny drizzle of chili oil. Since poblano soup is not inherently spicy (it’s very mild!), adding just a touch of the chili oil lends that hit of spice for those craving a deep heat. Start with less and add more as needed, because it gets hot quickly!

From there, I sprinkle with my fave So Delicious Mozzarella Flavored Shreds, because I can’t not have cheese, and it’s seriously the best vegan cheese I’ve ever tried. I’m newly impressed every single time I have it, ha!

After adding my dairy-free cheese, I throw down a handful of chili-lime pepitas, and slide a fried shishito pepper all up in there for good measure.

Sprinkle with flaky sea salt and pepper and you’re good to dive in! 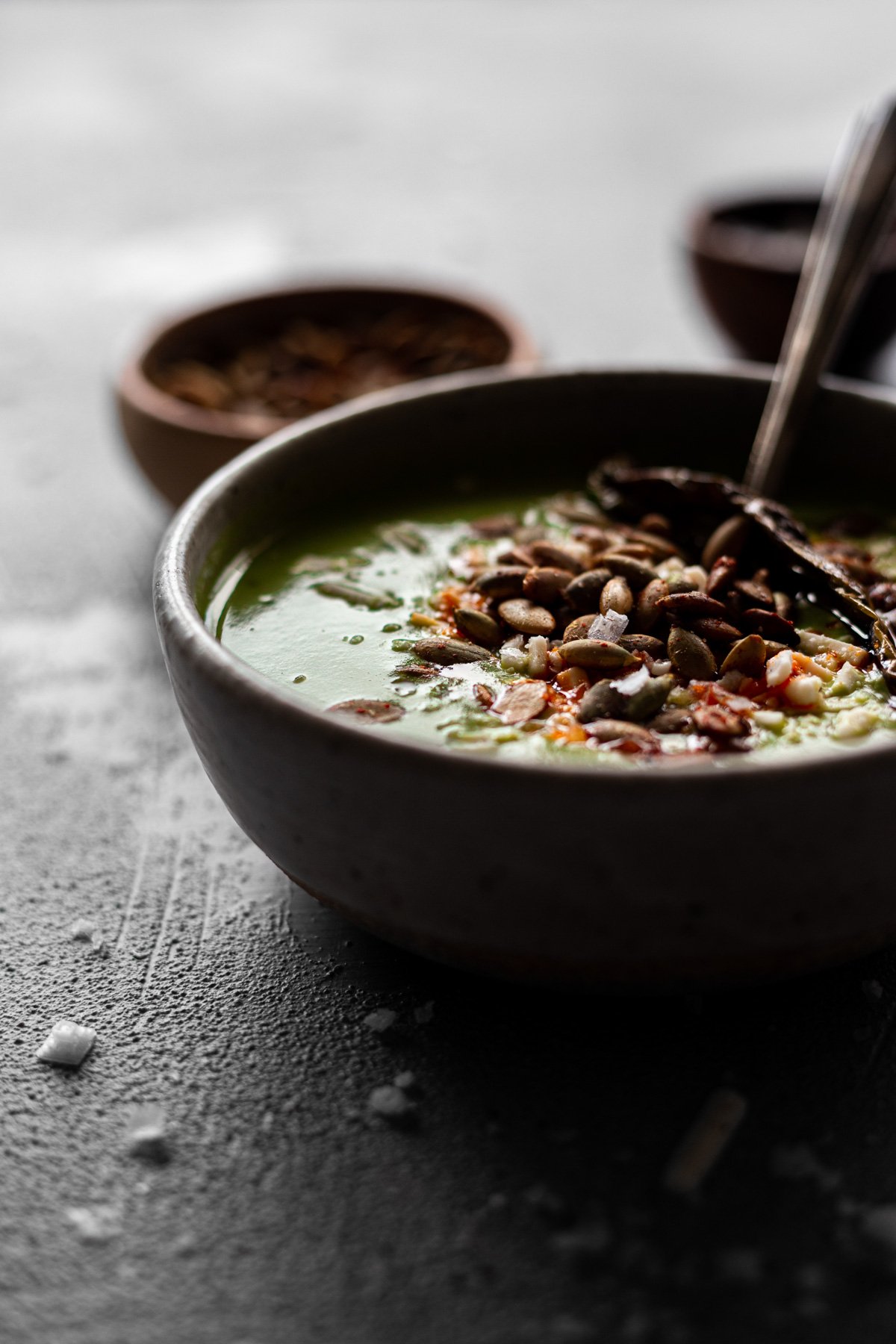 What if I can’t find poblano chiles?

How can I make it spicy without chili oil?

What if I can’t find pepitas?

What can I serve this dish with? 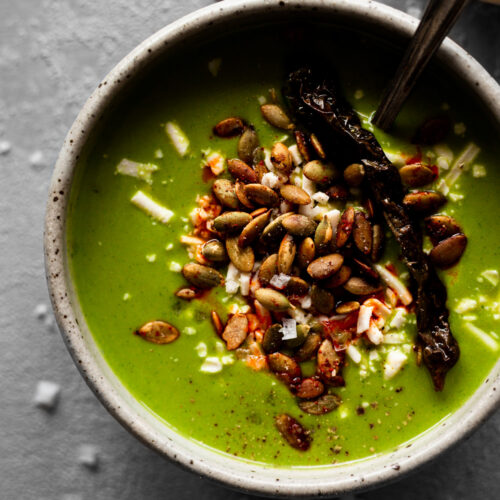 Ready in 30 minutes, this gluten-free and vegan Poblano Zucchini Soup Recipe features simple ingredients and is topped with crunchy pepitas coated in a zesty chili-lime mixture!

*If you can't find poblano peppers, use anaheim peppers instead. They are generally smaller and lighter in color, so you may need one or two extra. *To add spice without chili oil, stir in cayenne pepper into the soup, starting with ¼ teaspoon and building from there. *Feel free to use cashews or walnuts instead of pepitas if you can't find any, or pistachios.