Published: Oct 1, 2019 by Karly · This post may contain affiliate links

Rich and earthy spices take center-stage in this Za’atar Spiced Zucchini Fritters Recipe! Served alongside the easiest homemade labneh recipe, this dish makes a spectacular appetizer to share with friends and family, or serve it as a simple vegetarian meal, prepared on the Cuisinart 360° Griddle Cooking Center for a healthier take on a traditionally fried recipe! Follow the tips below for the thinnest, crispiest griddled fritters around, because your list of easy zucchini recipes needs these za’atar-spiced noms today! 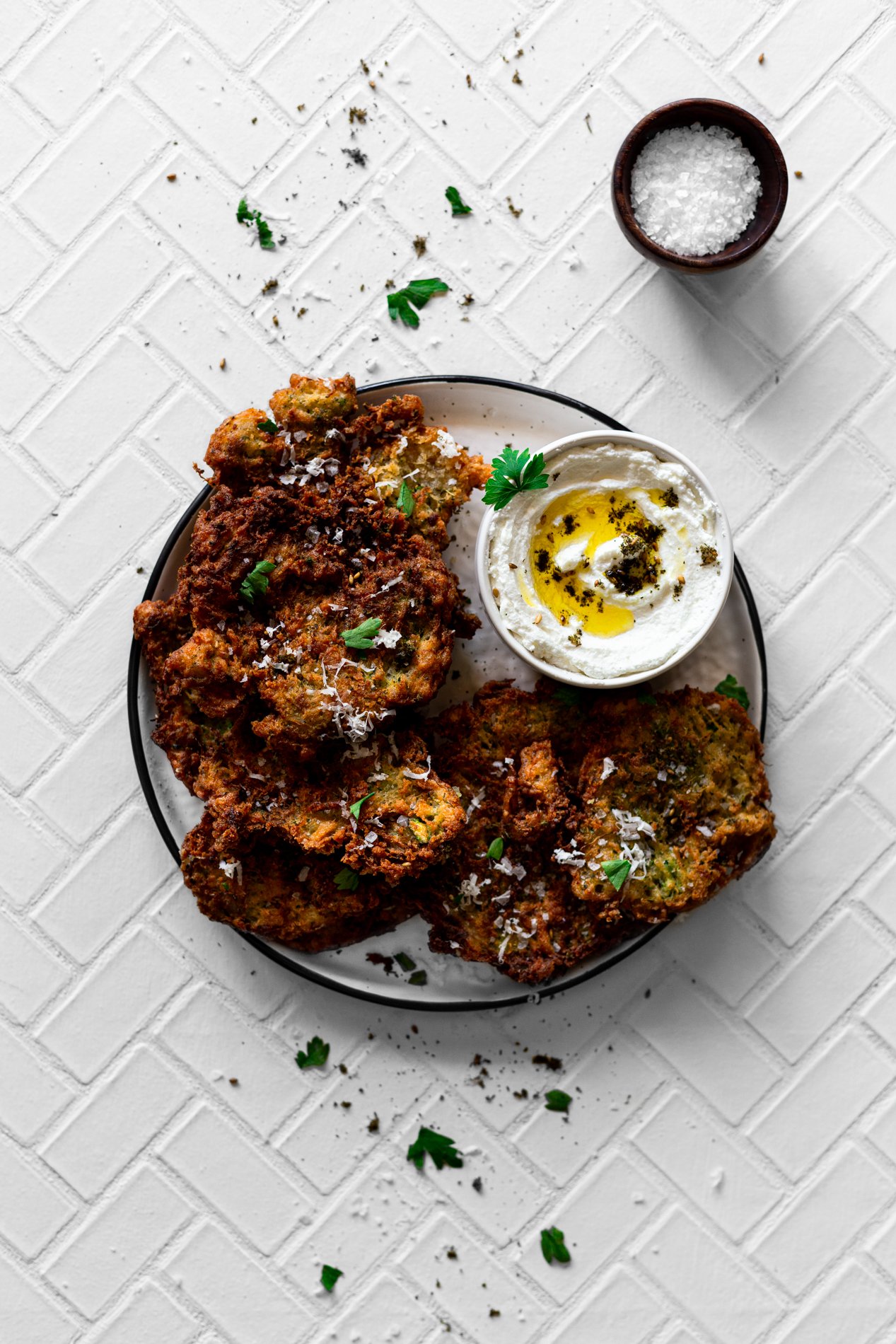 Since getting back from Israel, I’ve been spending most of my time trying to recreate the recipes I tried while over there. I’m still working on several recipes, but this zucchini fritters recipe was actually born before the trip, and altered as a result of it!

Yes! I had been working on this recipe since before I left, but once I experienced Israel, I knew I needed to incorporate more of that into this recipe. So I added za’atar that I got fresh from the market in Haifa, and I swapped my original tzatziki idea for fresh labneh.

Seriously, this recipe is sooooooooo much better for it. 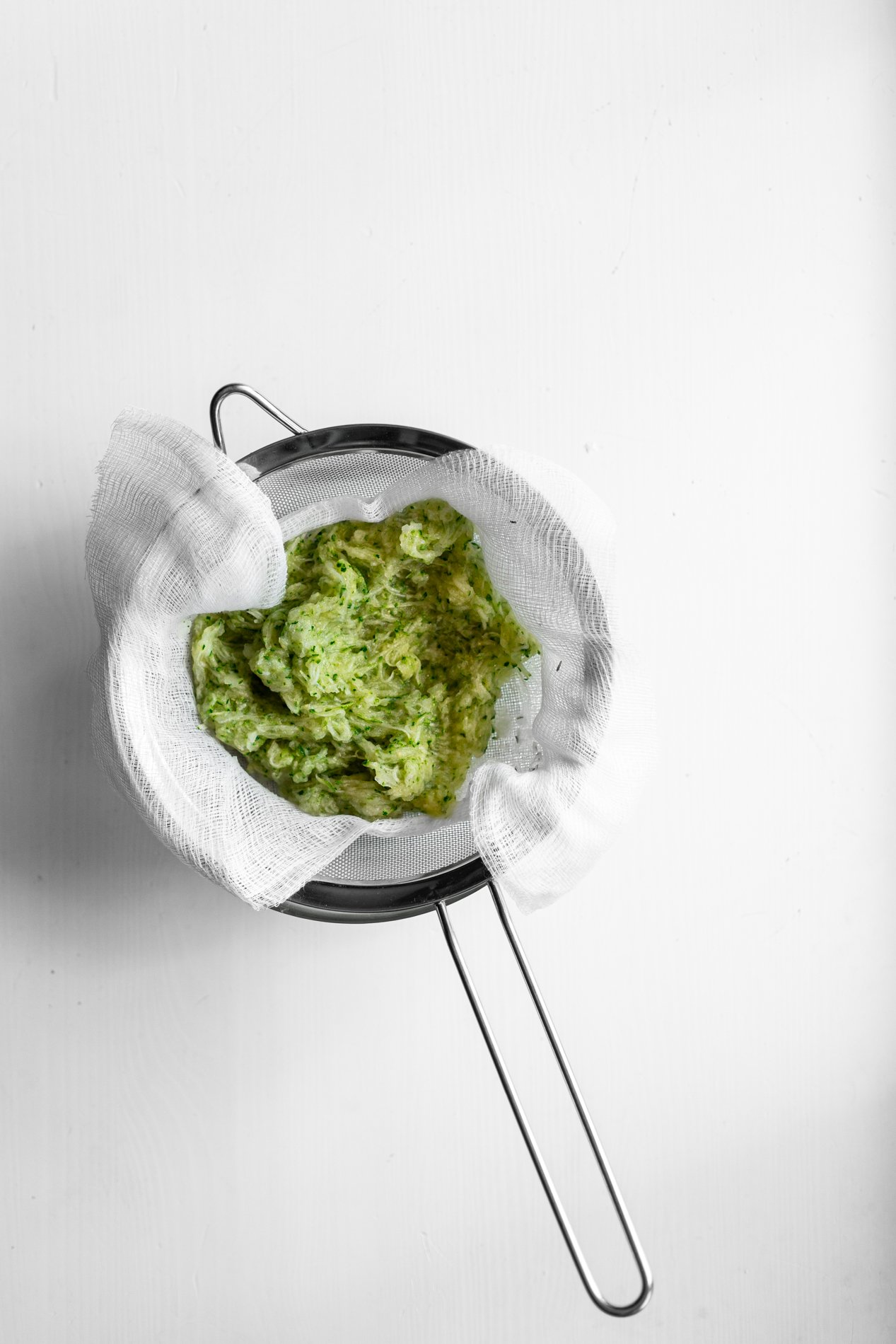 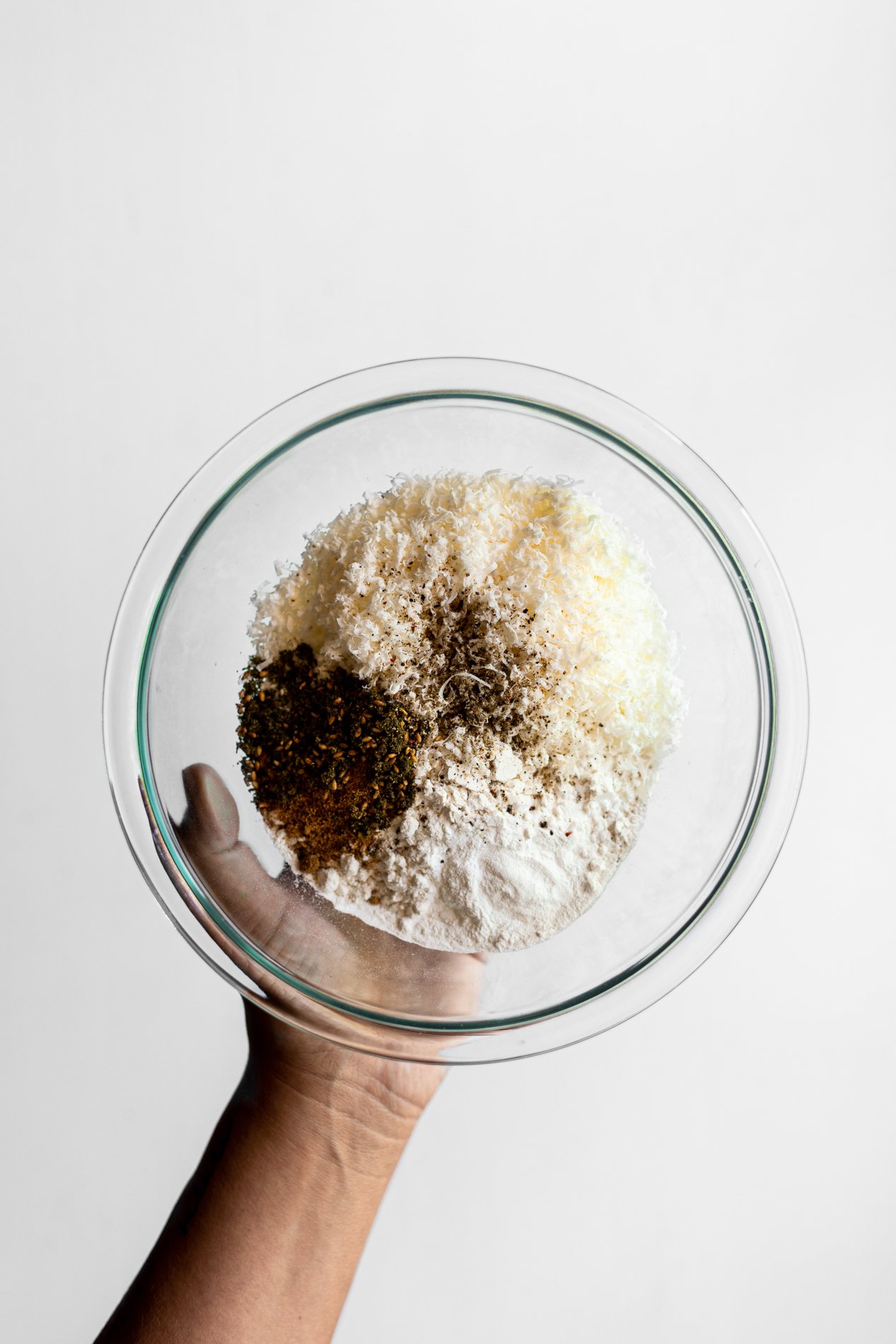 What’s In This Zucchini Fritters Recipe?

I actually took these fritters to the gluten-free realm, yay! But let’s look at everything inside these simple little fritter nuggets of awesomeness:

Now, I will say that I tested this recipe with a non-dairy milk (almond cashew blend) and I found the mixture to be stickier and harder to work with on the griddle compared to regular, 2% milk. If you want to use non-dairy milk, go for it, but you’ll likely end up with pancake-style fritters. They’re still tasty in my opinion, but not the same in the end. Since there is egg and feta involved already, I see no reason to swap the milk. 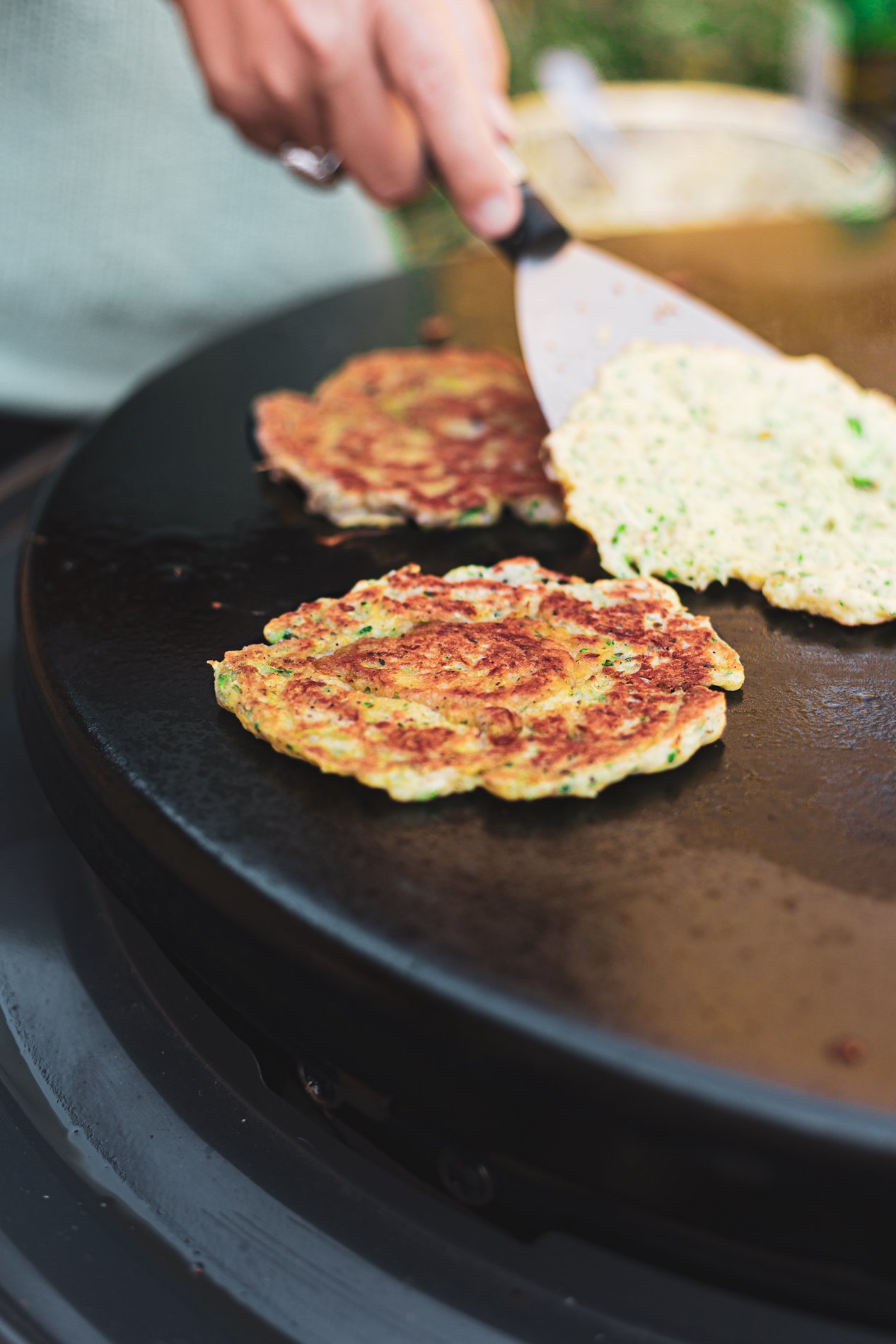 How To Cook These Fritters On A Griddle

One of the reasons I love my Cuisinart 360° Griddle Cooking Center is because it has a massive 22″ cooking surface, so I can cook a lot of food at once, and quickly!

With two heat zones, I can customize the temperature to accommodate different foods, which I love. So if I want to cook fritters on one side and keep them warm on the other? BAM! Done. Check out the Maple Bacon Breakfast Burgers I made on the Cuisinart 360° Griddle Cooking Center, utilizing different temperatures to get everything finished at the same time. It’s magical.

For these fritters, I keep the temp on high, because I want the outside of the fritter to crisp up quickly and brown thoroughly. I add some olive oil to the cooking surface, then drop a couple tablespoons of batter down into the oil. After about 5 seconds, I take a couple forks and start spreading the batter out to a thin patty, as thin as possible. The thinner, the better, as it’ll be crispier!

From there I let it cook for about 3 minutes and then flip, adding a little extra oil as needed for a slightly fried edge. 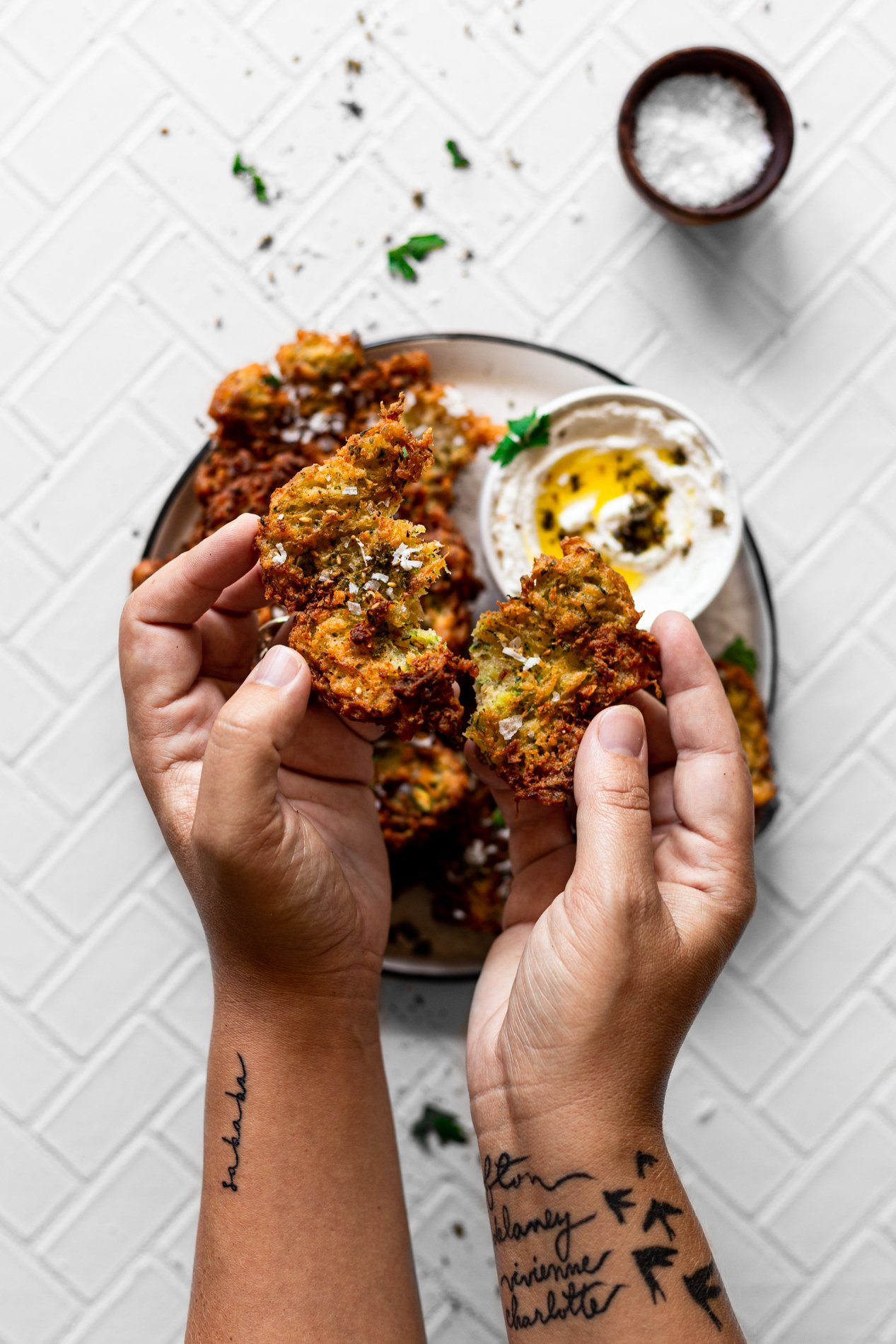 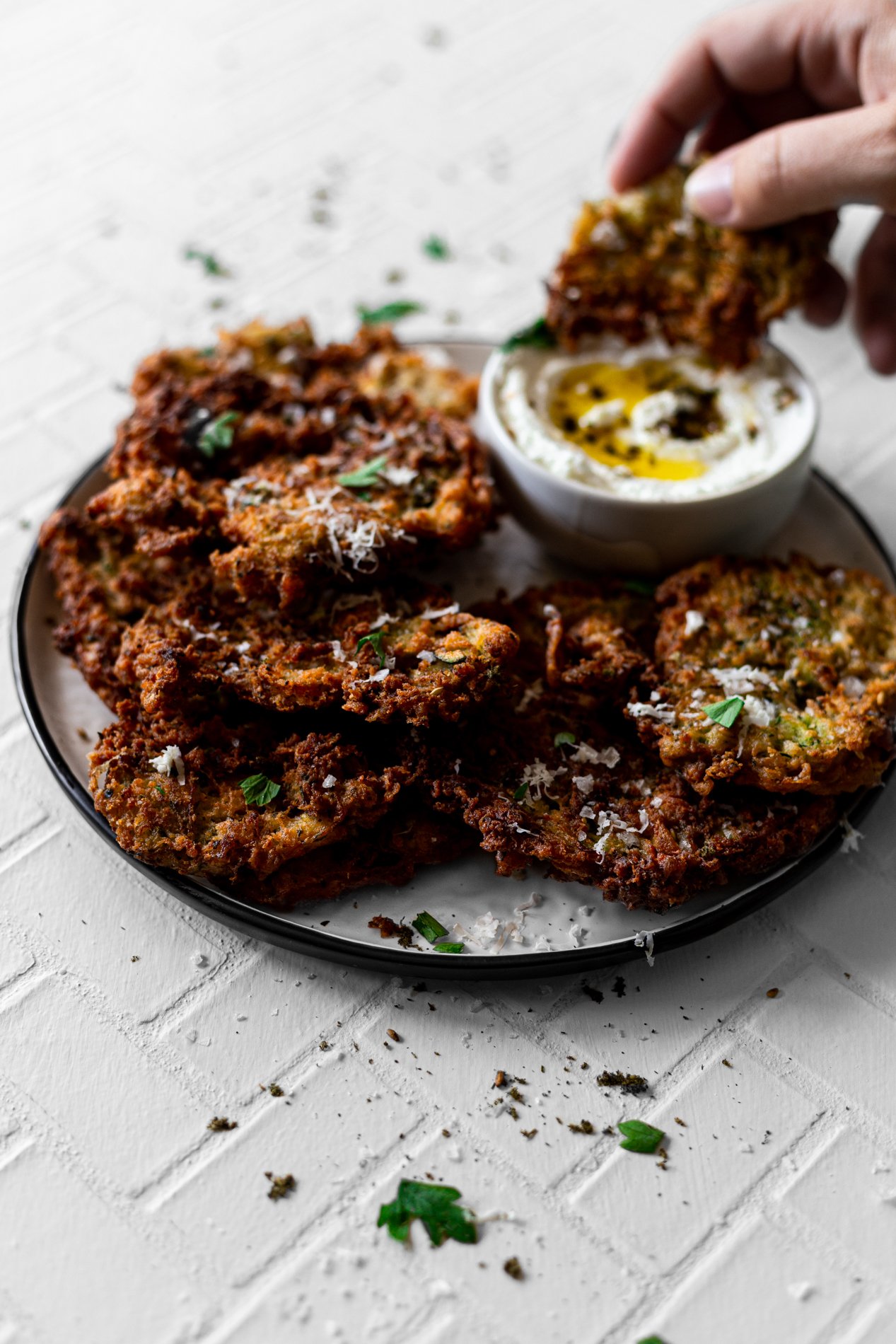 What Is Homemade Labneh?

It is literally yogurt cheese.

Yep! All you need is some plain Greek yogurt and a bit of salt, cheesecloth, and time.

Stir together the yogurt and salt, then place in cheesecloth over a container, or strainer, or over the sink and let it strain for several hours to overnight. The longer you strain, the thicker it gets. And zomg you guys, is it amazing.

I like to drizzle it with some olive oil and a sprinkle of za’atar. You can dip your zucchini fritters right into your dish of labneh, or get a knife and spread it over the fritter like butter on bread. 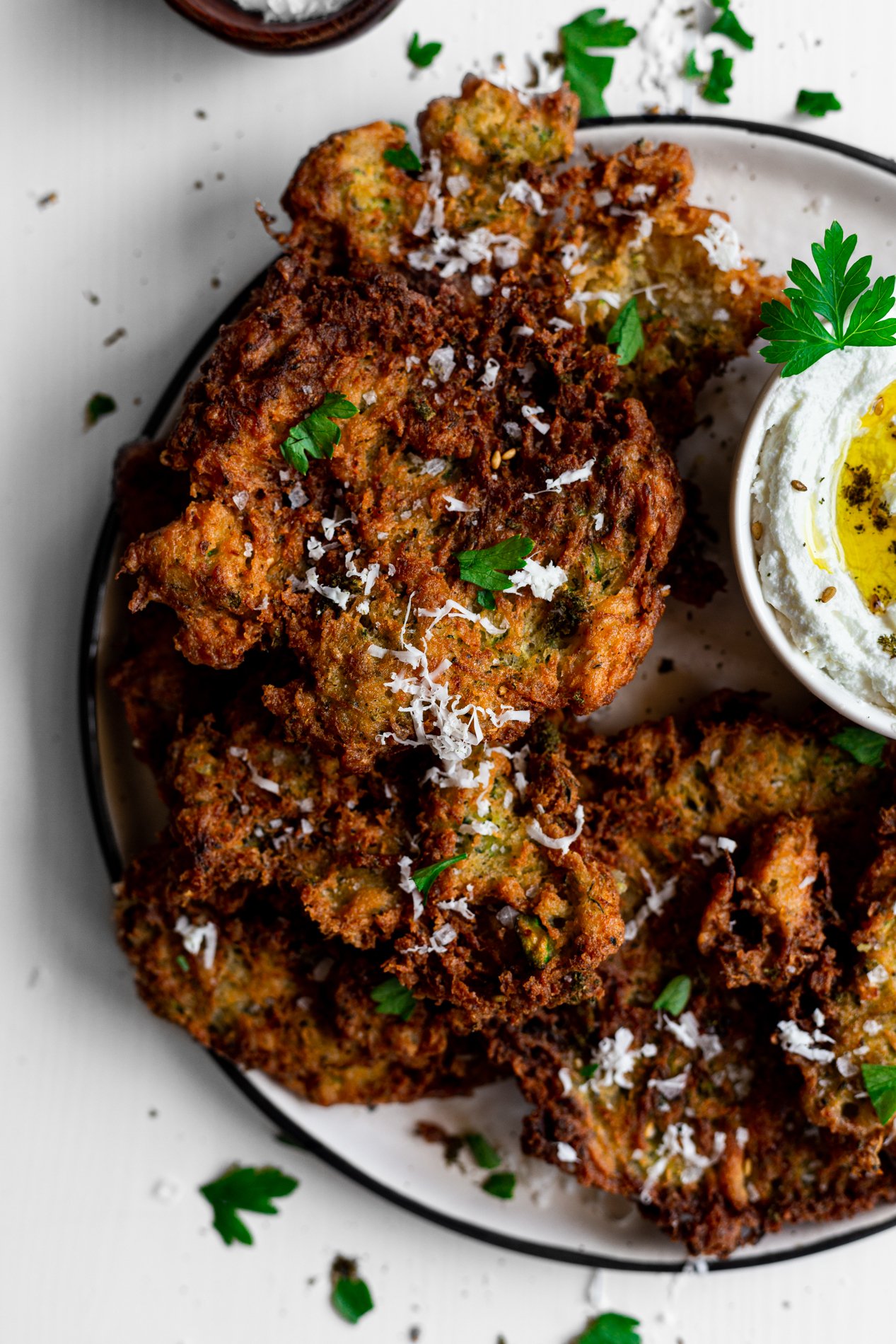 Dive into the flavors of the Mediterranean with this Za’atar Spiced Zucchini Fritters Recipe! Complete with a fresh, homemade labneh recipe, this divine dish is the perfect appetizer to share, or indulge in as a vegetarian dinner. Prepared on the Cuisinart 360° Griddle Cooking Center, this simple, gluten-free meal is a treat to feast on any day of the year! 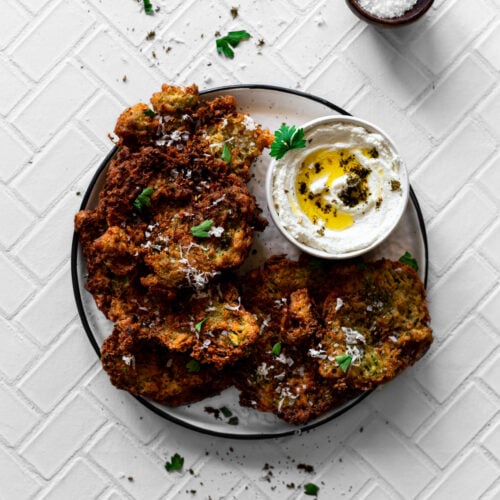 Dive into the flavors of the Mediterranean with this Za'atar Spiced Zucchini Fritters Recipe! Complete with a fresh, homemade labneh recipe, this divine dish is the perfect appetizer to share, or indulge in as a vegetarian dinner.

*prep the fresh labneh the night before by stirring together 1 cup full-fat plain Greek yogurt with ½ teaspoon kosher salt. Add mixture to cheesecloth and let strain over a bowl in the fridge overnight, or over the sink in the morning if you're short on time (it strains faster in warmer temps). The longer it strains, the thicker the labneh will be. Spoon into a serving dish and drizzle with olive oil and sprinkle with za'atar seasoning and enjoy!